Retailer Harvey Norman’s decision to pay back JobKeeper money on the back of record profits has reignited calls for more transparency around the multibillion-dollar wage subsidy scheme and sparked criticism of the government’s moves to claw back funds from unwitting individuals.

Harvey Norman on Tuesday announced it would return $6 million in funds received by company controlled entities under the government’s JobKeeper scheme, which was put in place at the start of the COVID-19 pandemic as an emergency mechanism allowing firms to retain staff. 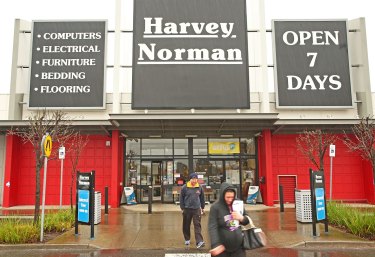 Harvey Norman has bowed to pressure and paid back JobKeeper funds.Credit:Scott Barbour

The amount did not include $14 million claimed by Harvey Norman’s privately owned franchisees. The retailer had previously resisted repaying the funds despite a massive jump in earnings during the pandemic, leading to significant public and political criticism.

Founder Gerry Harvey would not say why the company changed its mind. “I’m not going to talk about JobKeeper. Every time I open my mouth about JobKeeper I get into trouble,” he told The Age and The Sydney Morning Herald.

The JobKeeper scheme has come under increased scrutiny this month amid revelations hundreds of thousands of firms that used it actually increased their revenue during the pandemic.

Federal Labor MP Andrew Leigh, who has been one of the biggest critics of JobKeeper, said Harvey Norman’s repayment should lead to more transparency around the scheme. “Six months ago, Gerry Harvey flatly refused to repay. Does anyone imagine he would’ve repaid without huge public pressure?” he said.

“Harvey Norman has given us the best advertisement for more transparency into the secretive, rorted JobKeeper scheme.”

Dr Leigh also said the lack of transparency is particularly unfair because the government is also chasing thousands of individuals who were put on the scheme by their employers for welfare debts.

Services Australia told Senate Estimates in early August more than 11,000 people had a debt notice sent to them following a review of their government support and JobKeeper payments. About $33 million in debt had been raised through reviews by April 30. Services Australia declined to comment further or provide updated data on debt repayments.

One such recipient is Jessica Muschamp, a 50-year-old single mum of three from Melbourne’s Frankston who was furloughed from her job as an extracurricular drama teacher at the start of the pandemic.

She was placed on JobKeeper by her company but also received JobSeeker payments and has been advised she owes the government about $2500 because she received too much welfare. 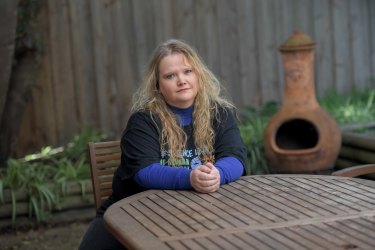 Single mum and part-time drama teacher Jessica Muschamp is repaying the government in $10 fortnightly instalments due to being paid too much in welfare after receiving JobKeeper.Credit:Joe Armao

“I did exactly what I was told to do,” she said. “I declared fortnightly what I’d earned and that included JobKeeper and that was all fine through the year.

She said knowing there were companies who brought in significant revenues during the pandemic while receiving JobKeeper to pay staff that have not been asked to repay the money added “insult to injury”.

“I am unsure how they can operate and not have to pay it back when ordinary civilians have to,” she said.

In Question Time on Tuesday, Treasurer Josh Frydenberg said he would “welcome Gerry Harvey or any other major company that’s in the position to repay the JobKeeper payments back” and had said this earlier in the year.

He said the wage subsidy scheme had helped increase consumer confidence and had been described as “well-targeted” by Treasury and “remarkable” by the Reserve Bank.

“JobKeeper is perhaps the most remarkably successful economic support program this country has ever seen … and it’s contributed to the strong rebound in the economy that we saw at the end of last year and the start of this year,” he said.

The Business Briefing newsletter delivers major stories, exclusive coverage and expert opinion. Sign up to get it every weekday morning.