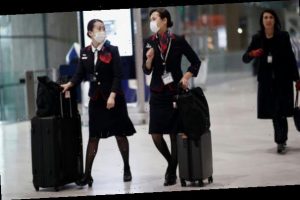 Female flight attendants working for Japan Airlines will no longer be required to wear high heels or skirts, the airline has said, in a rare victory for Japan’s #KuToo campaign against workplace dress codes for women.

The airline is the first major Japanese company to relax its regulations in response to complaints from women that having to wear high heels was uncomfortable and often left them in considerable pain.

Japan Airlines (JAL) said that under its new dress code, which will take effect next month, almost 6,000 female crew members would be able to choose footwear that “best fits their needs” and swap their skirts for trousers, adding that the move was intended to create a “diverse working environment”.

The airline’s decision was welcomed by Yumi Ishikawa, an actor and writer who is credited with starting the #KuToo movement – a play on #MeToo that combines the Japanese words for shoes (kutsu) and pain (kutsuu).

“It’s a great step given that Japan Airlines is such a big company,” she told the Thomson Reuters Foundation.

“It’s not only airlines – there are also hotels, department stores, banks and a lot of other companies with this requirement. I hope they follow this example,” added Ishikawa, who triggered the campaign last year with a tweet about being forced to wear high heels for her part-time job at a funeral parlour.

Other Japanese companies are unlikely to follow suit, however. Most firms whose business entails customer service, including banks and airlines, force women to wear high heels, according to a poll last year by the Kyodo news agency.

Another survey found that more than 60% of women had been told to wear high heels or had witnessed female colleagues being forced to wear them. More than 80% said the footwear had caused them physical discomfort.

The prime minister, Shinzo Abe, has said he opposes workplace dress codes for women, but Takumi Nemoto, who was health, labour and welfare minister when the #KuToo campaign started, said they were “necessary and appropriate” and were “generally accepted by society”.

The movement has since expanded to include demands for the right to wear glasses at work, after a TV report about companies that forced women to wear contact lenses sparked outrage on social media.

The hashtag “glasses are forbidden” trended on Twitter, with one user, who worked in a restaurant, complaining that she had been repeatedly told not to wear glasses because she would appear “rude”, and they did not match her kimono.