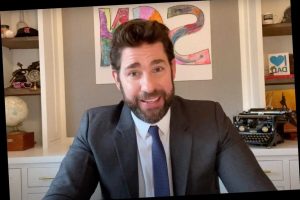 Ever since news broke that the “Quiet Place” star had agreed to sell his positive story broadcast “Some Good News,” which he developed for YouTube in March, critics have descended on social media to call out the 40-year-old actor/director for “selling out.”

Krasinski launched the show at the cusp of the coronavirus pandemic as a distraction from the devastating news coverage.

During his first broadcast March 30, he had a request for viewers. “For years now, I’ve been wondering, ‘Why is there not a news show dedicated entirely to good news?’ Well, desperately seeking my fix somewhere else, I reached out to all of you this week, asking — nay, begging — for some good news,” he began. “And, boy, did you deliver.”

But earlier this week, Krasinski aired his last installment after 14 episodes. All told, “Some Good News” earned nearly 1 million followers on Instagram and 2.57 million subscribers on YouTube, with each broadcast bringing in between 3 million and 17 million viewers.

Now, folks on social media are claiming he’s turned the feel-good program into a cash grab as the show has been officially licensed by ViacomCBS for an undisclosed amount of money after a reported bidding war. Very few details about the new show have been announced — other than the fact that Krasinski won’t be the host.

On Twitter, a Florida film professor complained, “You got to love when what seemed like an act of goodwill during a pandemic can be auctioned off to the highest bidder. Mmmmm taste that sweet sweet capitalism.”

Before cutting the cord, Krasinski gained traction by flexing his Hollywood ties. His premiere episode featured a rare “The Office” reunion between him and Steve Carell. Since then he has brought in big-star cameos including Brad Pitt and Lin-Manuel Miranda.

Krasinski signed off his final episode Tuesday, saying he was “no longer needing to remind you that no matter how hard things get, there is always good in the world. Thank you all for making this show so very special. We will see you again.”

With the move to CBS, fans of the show worry that the originally humble production will lose its appeal.

“I hate this so much. Some Good News was pure and wonderful and ViacomCBS using it as a ‘multiplatform showcase across the conglomerate’s brands’ makes me want to stab myself in the eyeballs,” added Josh Pigford, a tech entrepreneur. “THIS IS WHY WE CAN’T HAVE NICE THINGS.”

Krasinski, at least, has high hopes for the new and hopefully improved “Some Good News.” In a statement to the Hollywood Reporter this week, he said, “Could not be more excited and proud to be partnering with CBS/Viacom to be able to bring ‘Some Good News’ to so many more people! From the first episode, our goal was to create a news show dedicated entirely to good news. Never did I expect to be joining the ranks of such a historic news organization as CBS.”