The Electoral Boundaries Commission plans to scrap three seats in Melbourne’s eastern and south-eastern suburbs, where population growth has not kept pace with outer areas in recent years. Three new seats would be created on the city’s booming outer fringes. 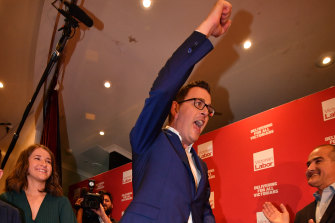 Premier Daniel Andrews cheers Labor’s 2018 election win. His Socialist Left faction will this week meet with sections of the Right after earlier this year signing a stability deal.Credit:Joe Armao

Premier Daniel Andrews’ Socialist Left faction will meet sections of the Right, in keeping with an internal truce brokered earlier this year, to discuss which faction’s candidates will contest the new seats of Kalkallo in Melbourne’s north and Laverton in the west.

It is unclear which factional group would hold sway in preselection for the new south-east seat of Pakenham, which Labor would hold on a margin of about 3 per cent based on 2018 election results.

Some party officials who spoke anonymously said the cross-factional talks could expose deep ructions within the Right, including among the Australian Workers’ Union and the National Union of Workers, which were excluded from the factional stability deal, leaving them vulnerable during preselection talks.

A senior Right faction source said Thursday afternoon’s meeting would not decide preselection. That process would begin after the Electoral Boundaries Commission completed the redistribution in October and would involve negotiations between union blocs within the faction.

“It is not a meeting where decisions will be made, won’t be a carve-up meeting. It’s a meeting of where we go from here to ensure a stable Labor Party that can win the state election,” the factional source said.

Parallel to internal jockeying over the three new seats, the Right-aligned Australian Workers’ Union is anxious to protect its factional member Attorney-General Jaclyn Symes, whose upper house seat of Northern Victoria is seen as increasingly marginal. And the National Union of Workers needs to shore up senior cabinet minister Martin Pakula, whose seat of Keysborough has been abolished.

Labor’s powerbrokers who signed the stability pact have vowed not to target sitting members during preselection battles.

The cross-factional stability deal was brokered to settle a bitter power struggle that erupted when the national executive seized control of the Victorian branch following industrial-scale branch-stacking allegations.

A Socialist Left figure said they would be pushing for the Right to preselect a woman for one of the new state seats, given they had endorsed the Right’s candidate for the federal seat of Hawke, Sam Rae.

“Our point of view at the moment is if the Right think they’re going to put a bloke in their seat, we won’t cop it,” the Socialist Left source said.