Labor has gone to the Federal Court seeking an injunction over signs it alleges were put up by the Liberal Party campaign team of Liberal Katie Allen, in the seat of Higgins, one of the tightest election contests in Victoria.

Allen holds Higgins by just 2.6 per cent and is locked in a battle with Labor and the Greens to hold the seat. 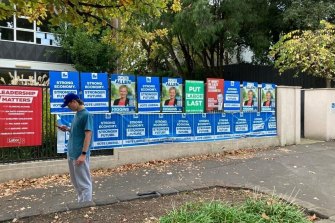 Labor is seeking an injunction over “Put Labor Last” signs appearing in Higgins, designed to look like they were placed by the Greens but allegedly from the Liberal Party.

Labor alleges that, on Friday afternoon, Allen’s campaign team installed signs at polling booths in the once-safe Liberal seat, which takes in suburbs such as Armadale, Glen Iris, Malvern, South Yarra and Toorak.

Labor said in a statement that the signs were “electoral fraud in breach of Commonwealth electoral law”.

A Liberal Party spokesman said the signs had not been authorised by the party and that the party was unaware of its origin. 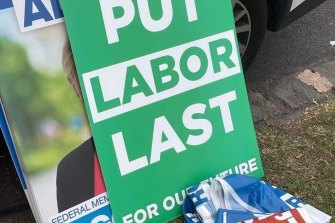 The signs were seen with material for Liberal Katie Allen.

“The Katie Allen campaigners were observed unpacking their cars, having been supplied with a range of materials that promote Katie Allen, as well as the fraudulent corflutes.

“The fraudulent materials only appear alongside other materials that the Liberals installed,” the statement said.

Labor said the person who appeared as having authorised the signs, “is not on the electoral roll”, but that the signs could be linked to the Liberal Party. Labor said in the statement that the Liberal Party and Katie Allen were “publishing material, impersonating the Australian Greens, and asking Greens voters to put Labor last”.

Higgins is expected to be one of the tightest Liberal-Labor contests in Victoria, with the Greens also an outside chance of picking up the seat.

Labor said it had asked the Australian Electoral Commission to remove the signs but that it had declined to immediately remove the material. The party has engaged law firm Holding Redlich, and filed an urgent injunction in the Federal Court demanding the AEC remove the signs.

Polling booth signage was controversial at the last election in the Melbourne seats of Chisholm and Kooyong, where the Liberal Party produced signs at booths in those electorates in Mandarin in the same colours as AEC signage. 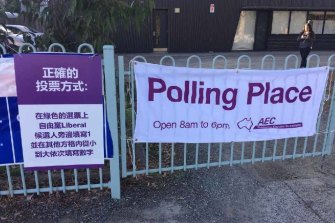 Liberal Party signage outside a polling booth in the Melbourne seat of Chisholm.Credit:Luke Hilakari

The signs said the “correct” way to vote was to put a one on the ballot paper next to the Liberal Party.

On election day in 2019, the AEC dismissed concerns about those signs, saying they were allowable as long as they carried proper authorisation and were located in an appropriate spot.

But the Federal Court late found the signs were misleading or deceptive when placed next to AEC signs, as they were at some polling booths.