The former boss of both the Nine and Seven Networks, Mr Leckie was 70. 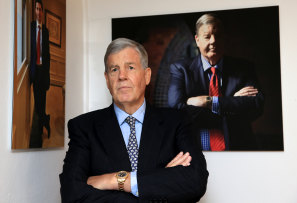 David Leckie at Machiavelli Restaurant, Sydney, back in 2014. Credit:Janie Barrett

“With immense sadness we advise the passing of our adored and much loved husband and father, David Leckie,” a family statement issued shortly after his death on Tuesday said.

“David passed away at Mulberry Farm, Robertson, after a long illness this morning. He was surrounded by his loving family.”

The family advised that due to COVID restrictions Mr Leckie will be farewelled at a small, private funeral. The service will be live streamed. A “celebration of David’s life” will be held at a future date following the lifting of restrictions.

Mr Leckie’s health never fully recovered from a life-threatening infection he suffered when he cut his finger in 2008, only to end up in an induced coma at St Vincent’s Hospital fighting for life. 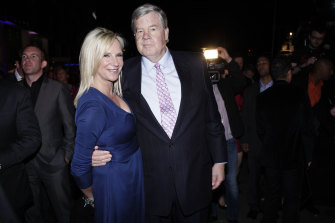 Skye and David Leckie, then CEO of Channel Seven, at the opening of The Star in 2011.Credit:Andrew Quilty

In 2012, he left his role as CEO at Seven West Media. However, he was brought out of retirement in March 2020 by Seven proprietor, the billionaire Kerry Stokes, to act as a “mentor” as the network faced increased challenges to its profitability.

Educated at Newington College and Macquarie University, Mr Leckie was described as a “profound force” in the Australian television industry, with an executive career spanning 40 years from 1977 to 2017.

“Larger than life”, “irascible”, “curmudgeonly”, “eloquent” and “charming” were just some of the terms used to described the man who dominated Australian television.

“He contributed enormously to the success we all shared with him here at Nine, his instincts and leadership heralded the golden era of Australian television,” he said.

“He adored his family and so many of us stayed in touch as a friend even after he left. He set the culture of excellence at Nine that still exists in our DNA today and we thank him for that.”

“Without a doubt he was the best TV executive this country has ever seen and an important influence and mentor for so many people and careers. He was once labelled the last of the rock star CEOs and I’d say that was a pretty good description.”

Seven West Media chairman, Kerry Stokes described Mr Leckie as a close friend, who helped revive the fortunes of the Seven network when he took the helm in 2003.

“David achieved the turnaround quickly and effectively, building a winning team, financial and programming model, which delivered us leadership of the TV industry for many years,” he said.

“He had a magnificent grasp of television and what people wanted to enjoy, whether it be news and current affairs or light entertainment programming, and he achieved success in every aspect of his leadership of Seven.”

Former Nine Entertainment CEO Hugh Marks, who was first hired by Mr Leckie, described the “huge influence” Mr Leckie had on many senior executives in the industry today.

“With that rare blend of skill in both the commercial and the creative. And an ability to bring people together with a common purpose. He will be sorely missed.”