LORD FROST: We need more urgency from the EU to sustain peace

LORD FROST: We need more urgency from the EU if we are to sustain the peace in Northern Ireland

Many Mail on Sunday readers will be wondering why we are, once again, in intensive and sometimes dramatic argument with the EU over the Northern Ireland Protocol.

Once again, threats are being made against us over how we treat part of our own country.

How can this be when these issues seemed so recently settled?

The answer is that, as Maros Sefcovic, my EU opposite number, acknowledged in a speech on Friday, there are a series of ‘unintended consequences’ from the application of the protocol.

The EU began the year by denying there were any problems. Now they admit there are and that fixes are needed. 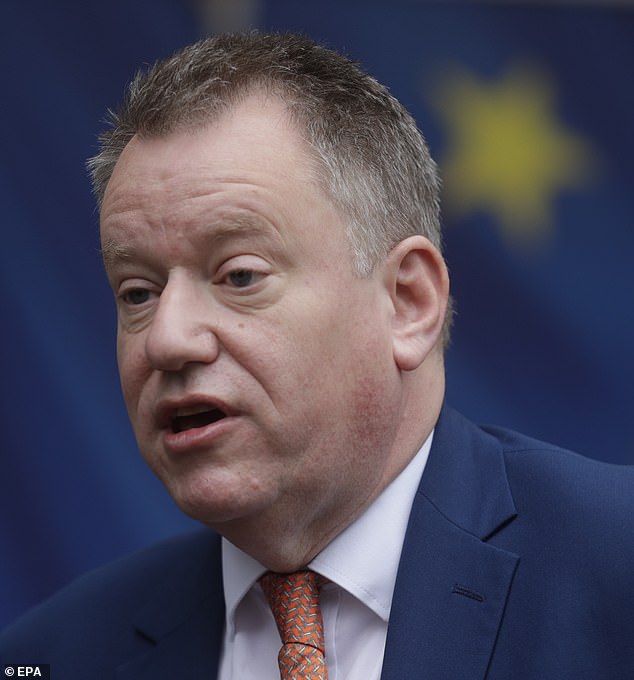 Brexit minister Lord Frost, pictured, said that the protocol issues are ‘not fair on consumers in Northern Ireland’

But so far their solutions don’t deal with the problems. We need more ambition and more urgency if we are to sustain the peace process and protect the Belfast, or Good Friday, Agreement.

The protocol itself says it should ‘impact as little as possible on the everyday life of communities in both Ireland and Northern Ireland’. But it is failing to do so.

The core of the problem is that all kinds of goods are not getting to Northern Ireland in the way that they do to the rest of our country, or face extra costs and delays if they do.

That’s not fair on consumers in Northern Ireland.

As we approach Christmas, we’ve seen a stream of stories about products being banned and services being withdrawn because of the protocol. 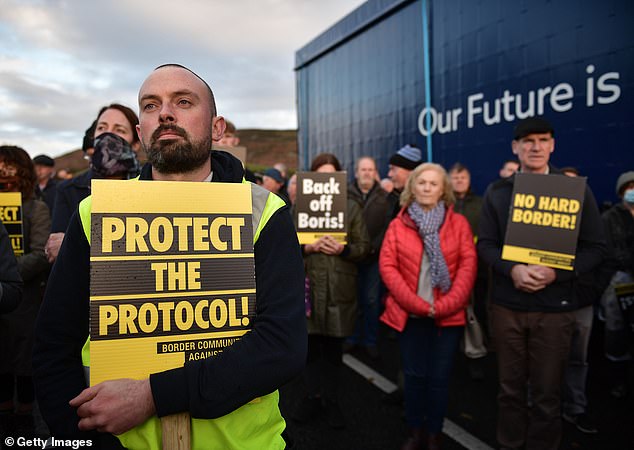 Marks & Spencer has had to withdraw its entire Christmas product ‘Click and collect’ service from Northern Ireland because of uncertainties in delivery timetables. These stories aren’t new – they’ve been happening all year.

We have been told of at least 200 retailers who have stopped delivering to customers in Northern Ireland.

We know that many medicines and drugs are being withdrawn. We have seen the Jewish community in Northern Ireland saying they feel at risk because they are struggling to import kosher products from elsewhere in the UK.

Garden centres can’t get many kinds of plants and seeds from the rest of the UK because their import to Northern Ireland is banned.

We are even in a position where plans to mark the Queen’s Platinum Jubilee next year by planting trees cannot be properly implemented in Northern Ireland because English oaks, and many other trees, can’t be moved there – even though plenty were moved until the end of last year, and as far as I am aware have not all been cut down since. 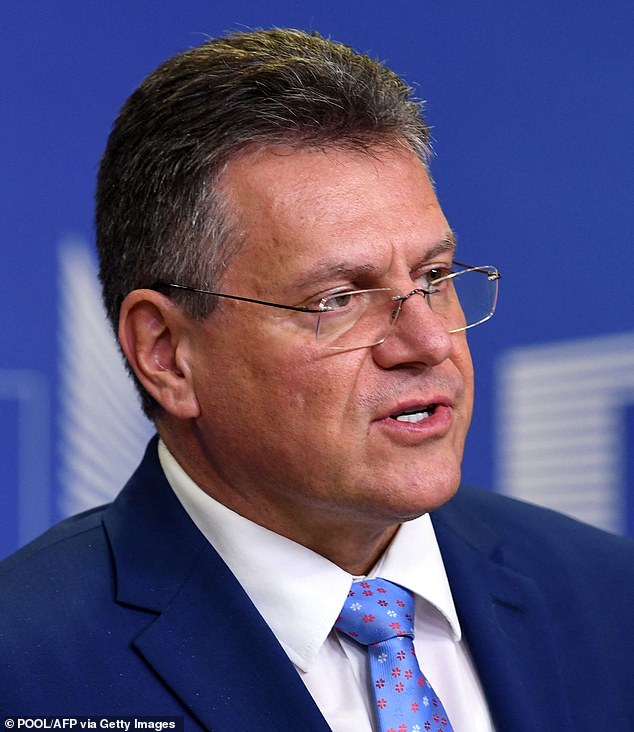 Maros Sefcovic, pictured, acknowledged in a speech on Friday that there are a series of ‘unintended consequences’ from the application of the protocol

Some other services are working only because this Government simply cannot reasonably implement everything the protocol requires.

The EU have tried to take us to their Court of Justice for this. But without this flexibility, every parcel sent to every person in Northern Ireland, whether by Amazon or friends and family, would have needed a full customs declaration.

Even so it’s easy to find online examples of it being actually more expensive to send a parcel to Belfast than to Dublin.

Similarly, it is only because the rules on pet passports are not being enforced that families going to or from Northern Ireland for Christmas can take their pet dogs with them.

As a result of all this, businesses in Northern Ireland are starting to give up on other British suppliers and buy from Ireland or elsewhere in the EU.

Trade between Ireland and Northern Ireland has gone up by 40 to 50 per cent since the start of this year.

So the protocol arrangements risk pushing Northern Ireland’s trade and economic links away from the rest of the UK. It’s not surprising people are worried.

Whenever I go to Northern Ireland I find a high degree of concern about this situation.

Some want it resolved by negotiation; some want us to use the safeguards available under Article 16 of the protocol.

But everyone wants it resolved. And I have not found anyone who thinks full implementation of the protocol would be possible in the real world.

There’s a simple solution. Goods which both we and the EU agree aren’t going to leave Northern Ireland should not be treated as if they were moving from one country to another – because they are not.

Goods going on to Ireland should be checked, in the Irish Sea, to protect the EU’s single market and to avoid a hard border between Northern Ireland and Ireland. That’s what we have proposed.

But at the moment the EU says it is impossible. I urge them to think again.

The current problems with the protocol go to the heart of our territorial integrity, of what it means to be one country and one market. They will not just disappear.

I still hope the EU can show the ambition needed to fix the problem by agreement. If they can’t, of course we will have to safeguard our position in other ways.

For my part, I am working as hard as possible to reach a deal. If we can, we can move on from the current frictions and get back to what we always wanted – good relations and free trade with our closest friends and neighbours.