Major parties must make women a centrepiece of their policies

Over the years, there has been an unfortunate tendency by political parties and their election campaign strategists to categorise voters under convenient labels.

“Families” usually becomes shorthand for young, aspirational households, mostly with a mortgage and wrangling schoolchildren. “Workers” is translated to mean tradies with their utes and tools, shift workers, small business owners and, occasionally, someone who works in the services sector. 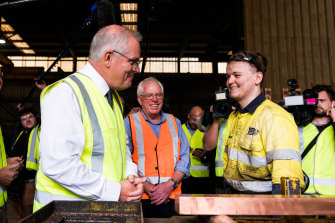 Prime Minister Scott Morrison visiting an engineering firm in the Tasmanian seat of Bass during the election campaign.Credit:James Brickwood

Rarely are women, especially middle-aged women, considered worthy of targeted policies that appeal to their own needs and aspirations. Instead, they tend to be lumped into an amorphous mass, based on the presumption that they are primarily and overwhelmingly concerned about policies that focus on families, childcare, aged care, healthcare.

Of course they are engaged and concerned about those issues, but they also care about matters that affect them directly – not just through the focus of family.

As Jacqueline Maley notes today, well-educated, professional women, who have melded careers with raising a family, are big factors behind the independent “teal” candidates gaining ground in traditional Coalition seats.

Polls show women’s support for the Coalition has dropped sharply over the past year. Resolve Political Monitor polling for The Age indicates about 30 per cent of women would give their primary vote to the Coalition, down from 40 per cent in June.

And women’s support for Scott Morrison as preferred prime minister has tumbled from 46 per cent in May 2021 to 33 per cent, while Labor leader Anthony Albanese’s support has jumped from 22 per cent to 35 per cent.

Ipsos poll figures suggest support by women is about 29 per cent for the Coalition and 33 per cent for Labor. Neither figure suggests resounding approval.

Clearly, there is disaffection aplenty among women – and no wonder. Big disparities persist in pay levels between men and women. The gap in superannuation outcomes at the end of (often broken) careers leaves many women struggling in their older years.

And advances made over many decades in women’s rights – equal pay, job opportunities, determination of what they can do with their own body – seem to be stalled or falling away.

While the Australian Election Study shows 53 per cent of voters believe governments should increase job opportunities for women, about 13 per cent believe gender equality has gone too far – a big step up from the 6 per cent who felt that way in 2007.

The push towards imposing conservative mores on women, winding back decades of advances, was most evident this week in the United States, where a leaked draft opinion indicates the Supreme Court intends overturning Roe v Wade, which affirmed women have a constitutional right to an abortion.

In Australia, at least, the matter is clear. The overwhelming majority (77 per cent) of Australians support a woman’s right to have an abortion and only 11 per cent are opposed. That position has not changed in seven years, according to Ipsos pollsters.

Yet, the federal minister in charge of women’s issues, Amanda Stoker, considers it entirely acceptable to attend anti-abortion rallies in her official capacity. She did it last year and again this year – this time, during an election campaign.

Stoker’s ministerial role, presumably, is to support all women, not just religious conservatives. But instead, she insists on standing with a fringe minority.

If that is a demonstration of the Coalition’s support for that catch-all category of “women’s issues”, it will be pummelled in the polling box.

To its credit, Labor has vowed to make gender equity a goal of the Fair Work Act. But more can, and should, be done (such as fulfilling its promise for superannuation to be paid on top of taxpayer-funded parental leave).

Step up, men. It’s time to lift women higher, to improve every aspect of their lives – their financial security, health and ambition – and about time the major parties started taking women’s concerns seriously by making them a centrepiece of their policies. Ignore them at your peril.

Gay Alcorn sends a newsletter to subscribers each week. Sign up to receive her Note from the Editor.