Hello from the other side! NHS worker is mortified after neighbour who heard him crying in the bath while listening Adele sends him a note asking if he wants company

An NHS worker was left crying tears of embarrassment when his next door neighbour dropped off a note – after hearing a particularly sorrowful karaoke session.

Harry Joe, 25, from Leeds but based in Aberdeen, had spent the prior evening crying in his bath while listening to Adele.

The next day, his compassionate neighbours left him a note asking if he wanted company, which tipped Harry off that they might have heard him cry and sing to Adele’s music the night before.

He shared his story on Twitter and it quickly went viral, with many saying the NHS worker’s neighbours sounded like lovely people. 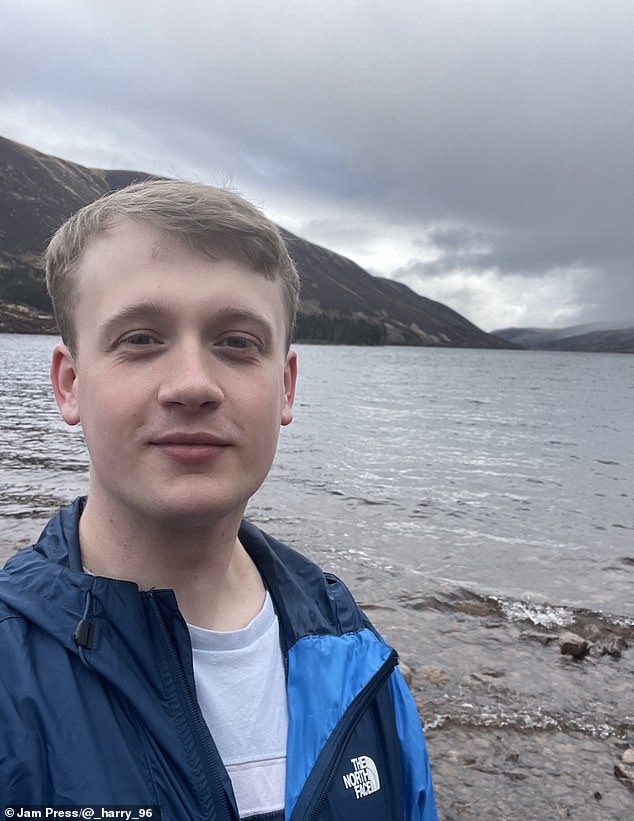 Harry Joe, 25, pictured, from Leeds but based in Aberdeen, had spent the prior evening crying in his bath while listening to Adele when he received a note from his neighbour, whom he didn’t know very well, asking if he needed company 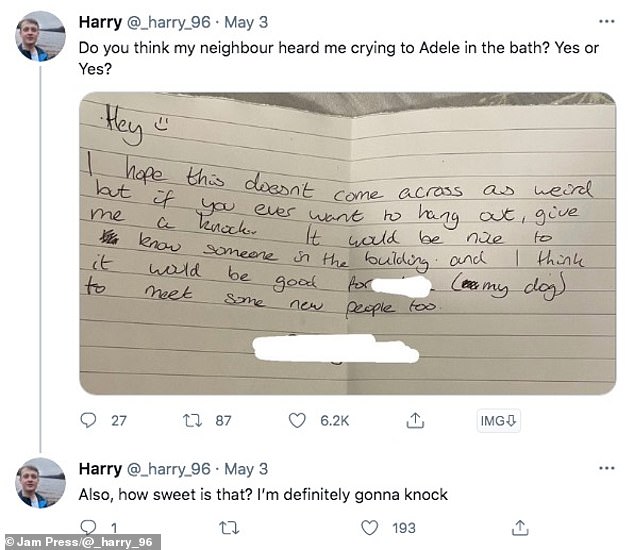 Harry shared the sweet note online, which read: ”Hey, I hope this doesn’t come across weird but if you ever want to hang out, give me a knock. It would be nice to know someone in the building and I think it would be good for my dog to meet new people too’

Harry, who shared the note on Twitter, wrote: ‘Do you think my neighbour heard me crying to Adele in the bath? Yes or Yes?’

The note read: ‘Hey, I hope this doesn’t come across weird but if you ever want to hang out, give me a knock.

‘It would be nice to know someone in the building and I think it would be good for my dog to meet new people too,’ it went on.

Harry, who is currently based in Aberdeen working as a student operating department practitioner with the NHS, added: ‘How sweet is that?’ 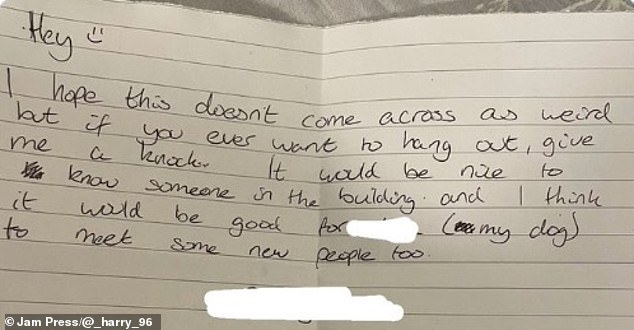 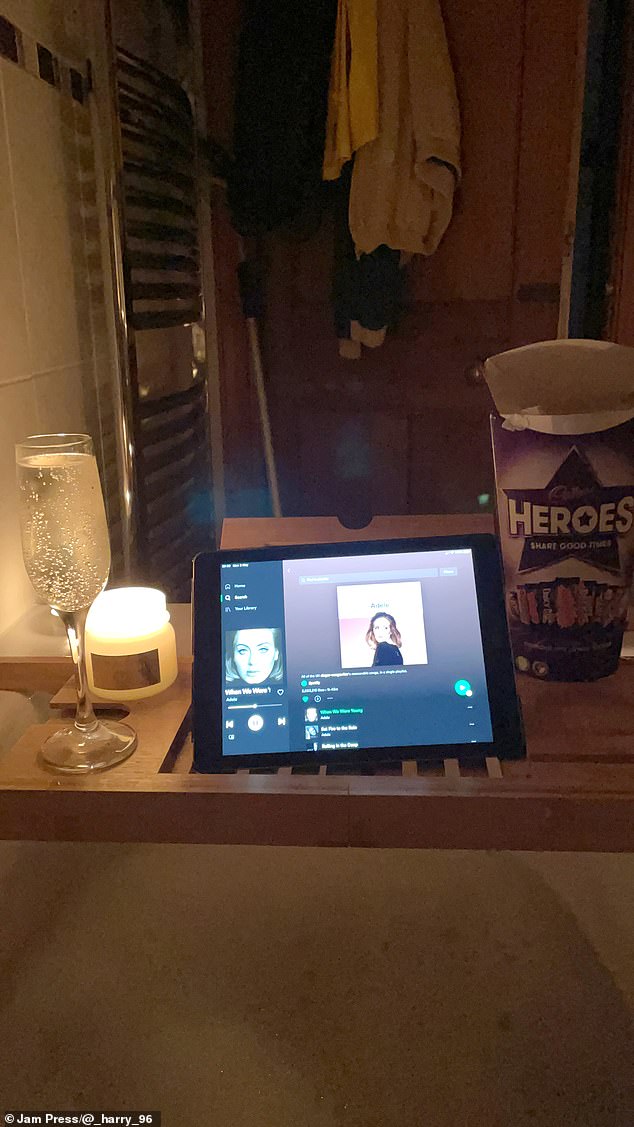 View from the bath: Harry said he likes to put an Adele playlist on while in the bath, and said crying to the singer’s work is a ‘semi joke’ 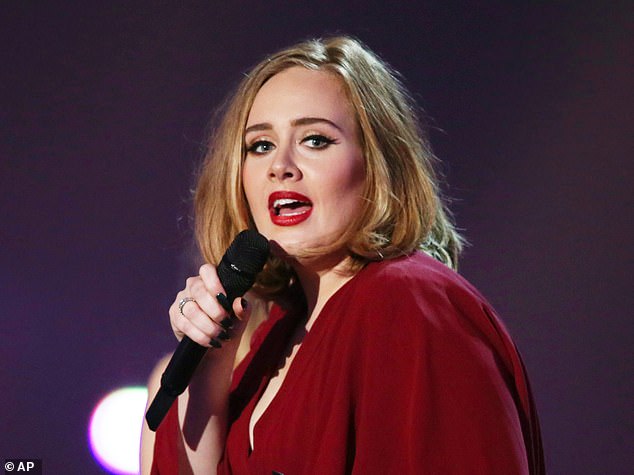 Adele fan Harry said he loves the singer and can’t wait for her new album, so that he can enjoy it in the bath with some wine

Explaining more about his bath time performance, the 25-year-old revealed he was having a soak in the tub on the evening of Monday 3 May when he heard the letter box.

Harry said: ‘I thought it was going to be a noise complaint at first! But once I read it I was a bit embarrassed.

‘But also thought how nice it was, people don’t usually interact in that way anymore, especially in their early 20s.

‘Crying to Adele was a semi-joke. I often have a bath with a bottle of wine and a mopey Spotify playlist – but I do love Adele and I’m ready for the new album.’

Up until this point, Harry, who has lived in his flat for a year, said he and his neighbour had only exchanged polite greetings after he moved in around a month ago. 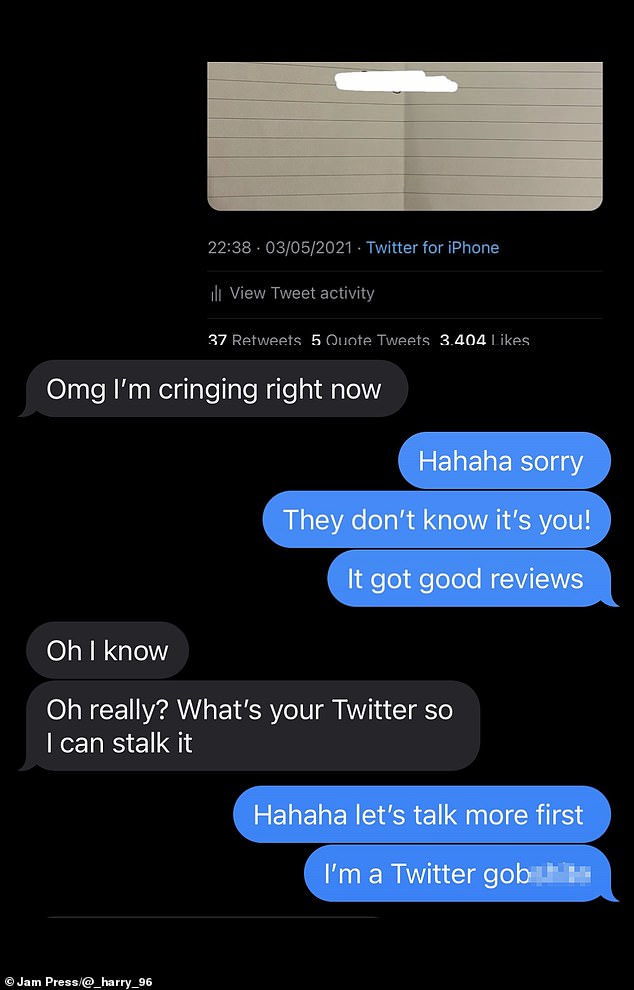 The NHS worker broke the news to his neighbour, with whom he was now exchanging texts, that his tweet about the note had gone viral

The student ODP responded to the message the following morning by sharing his phone number and the sweet exchange has led to a blossoming friendship.

Harry said: ‘We’ve never stopped for an actual chat so I think he genuinely wanted to meet his new neighbours.

And he’s revealed the note has opened the door for a sweet friendship between the two neighbours.

‘We’re going for a coffee and a walk into town today, we’ve messaged a fair bit,’ he said.

The neighbour, who has now been revealed to be Bradly, 24, saw Harry’s post go viral and found the whole thing funny.

Harry said: ‘I had to break it to him that the tweet went viral but he found it funny and said his friends had already seen it but didn’t realise it was him.

‘I thought my follower base would find it entertaining but I didn’t think it would go viral – let’s hope the queen of pop Adele sees it!’

The lovely story has received a positive response from Twitter, with nearly everyone saying what a nice thing it was to do and the rest asking to see photos of the dog.

‘I think that is a lovely gesture… we call people neighbours but often they are just people we nod at and smile .. this person is reaching out which is what actual neighbours do rather than being “someone I live in close proximity to” could be a friendship waiting to start,’ one follower tweeted.

‘Awh this is really cute!!’ one said.

‘Fast forward two years to the cuddles on the couch and the dog quite at home by your side,’ one said.