Melbourne will host the "biggest fight in Australian history" in October when the UFC behemoth rolls into town with champ Robert "The Reaper" Whittaker taking on undefeated Israel "The Last Stylebender" Adesanya.

The much-hyped bout is expected to pack close to 60,000 fans into Marvel Stadium on October 6 and beam Melbourne to a potential 300 million fans in 170 countries. 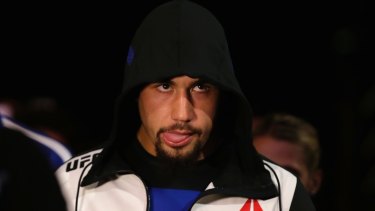 The last mega-bout at Marvel Stadium between Ronda Rousey and Holly Holm in 2015 attracted more than 56,000 fans, a UFC record, and generated more than $100 million for the local economy, according to the Victorian government. 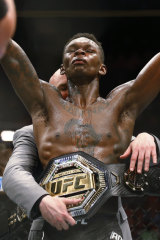 Promoters aim to make it the biggest combat sports event ever on Australian soil.

"To have two champions in Whittaker and Adesanya fighting for the title on home turf is huge – this will be the biggest fight in Australian history," UFC president Dana White said.

New Zealand-born Whittaker, the middleweight champion, moved to Australia at a young age and will enjoy home-town support.

Adesanya, who fights out of New Zealand, has an unblemished 17-0 record, most recently claiming the UFC interim middleweight belt in his victory over Kelvin Gastelum in April.

As White wrapped the belt around Adesanya's waist at the State Farm Arena in Atlanta, fans across the Anzac nations were already salivating at the impending unification bout with Whittaker.

Whittaker (20-4) has been sidelined with serious injuries and the October bout marks his return to the octagon after more than a year.

Plans for Whittaker's first official title defence, against Gastelum, were thrown into disarray in February when the 29-year-old was diagnosed with a hernia in hospital.

"His colon and his intestines had popped out," White said at the time.

"They think he’s had it for a while and it’s been popping in and out. The scary thing is if he took a shot to the stomach, he could have died," White said.

The Victorian Government lifted the ban on UFC in 2015, paving the way for Rousey vs Holm and Adesanya vs Silva earlier this year at Rod Laver Arena, which sold out in eight minutes.

The undercard is yet to be announced.