There is a moment in the new Marvel series Loki when the eponymous god of mischief and part-time Avengers franchise villain comes face to face with something greater than his own divine powers: the heavenly HR department.

Trapped in the back office of what seems to be a time-travel policing agency, and in the hands of gruff Agent Mobius (Owen Wilson), Loki (Tom Hiddleston) tackles his situation much like his employers have tackled Hollywood convention: “I don’t have to play this game. I’m a god,” he says. 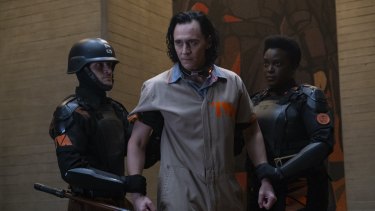 And he’s right. The commercial success of the Marvel franchise is indisputable: some US$17 billion in box office from 22 feature films alone, and that’s before we get to tie-in toys. But it is now playing a part in the slowly re-shaping television landscape, lining up blue-chip content dominoes by strategically side-stepping the medium’s historic weaknesses.

One of those: its reliance on overnight ratings. Much like cinema box office, the fortunes of an artistic enterprise can rise and fall on simple mathematics, measured in eyeballs watching or tickets sold. And in the streaming era, studios are having none of that.

Instead, streaming television plays a game of pecuniary smoke and mirrors. Slyly using words like “hit” without having to account for the measurable success of a new series in the same way its traditional predecessors did, and side-stepping the brutal TV show body count that often went with it.

Instead, the Disney-owned Marvel has batted up left-of-field ideas – the darkly high concept WandaVision and the up-sized B-team Falcon and the Winter Soldier – and surprised the market with both its inventiveness and its adherence to comic book lore.

“I’ve always believed in expanding the definition of what a Marvel Studios movie could be,” Kevin Feige, the head of Marvel Studios, told Variety. “We try to keep audiences coming back in greater numbers by doing the unexpected and not simply following a pattern or a mould or a formula.”

Star Wars has a similar tale to tell, where the old school final trilogy of the Star Wars cycle lumbered past the box office finishing line making a lot of money but taking a creative hammering from both critics and fans, while its leaner, sharper streaming cousin, The Mandalorian, was caped in glory for its emotional power and elegantly simple character notes.

What makes Loki matter more than most new streaming show launches is that unlike its predecessors WandaVision and Falcon and the Winter Soldier, Loki is the first television series in the Marvel franchise to feature one of the A-list comic book characters in the Avengers mythology. 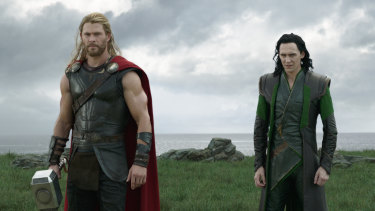 To give the series an added complication, Hiddleston’s Loki, the brother of thunder god Thor (Chris Hemsworth), was killed several films ago, in Avengers: Infinity War. It’s hardly a spoiler to reveal that he is effectively resurrected in this series – the clue’s in the title, folks – but we will refrain from revealing the how and, pivotally, the when.

Hiddleston’s performance as Loki has always been defined by its humour as much as its pathos. Both seem to be on display in equal measure in Loki, leaning into space historically occupied by very British genre shows, like Doctor Who and Red Dwarf. This isn’t purely comedy, but there are moments mined for laughs.

What sets it apart, however, is the wolf-in-sheep’s-clothing-like quality that has come to define Marvel’s storytelling. WandaVision was not a superhero story, but rather a twist on the traditional sitcom which turned into a full-blown subcutaneous horror story.

And Loki, spun out of a superhero franchise and steeped in comic book lore, turns quickly into a police buddy comedy, with Wilson’s Mobius playing the street-weary agent partner to Loki, full name Loki Laufeyson. The result – like much of Marvel’s twist-in-the-tale storytelling – is brilliant.

And the last word, predictably, is Loki’s, with this dry observation, that could also be a statement on studios, copyright and the new world of streaming. “You ridiculous bureaucrats will not dictate how my story ends!” he exclaims in court. “It’s not your story, Mr Laufeyson,” replies the judge, dryly. “It never was.“

Loki is streaming on Disney+.

Hawkeye
Jeremy Renner returns as Clint Barton/Hawkeye in this series created by Jonathan Igla and set after Avengers: Endgame (2019). It will air in late 2021.

Ms. Marvel
Iman Vellani stars as Kamala Khan/Ms. Marvel in this series created by Bisha K. Ali and filmed in the US and Thailand. Airs in late 2021.

She-Hulk
This series stars Tatiana Maslany as Jennifer Walters, the cousin of Bruce Banner, who gains “hulk”-like powers after a blood transfusion, to become She-Hulk. Filming in Los Angeles. Airs in 2022.

Secret Invasion
Focusing on the Nick Fury (Samuel L. Jackson) character, this series is about a sect of Skrulls who have infiltrated Earth society and will be filmed in the UK later this year. Airs in 2022.

Ironheart
This series is focused on the character of RiRi Williams, alias Ironheart. According to US media, actor Dominique Thorne will play the lead. No airdate has been announced.

Armor Wars
Starring Don Cheadle as James Rhodes/War Machine, this series is about Stark company technology that falls into the wrong hands. No airdate has been announced.

Untitled Wakanda Project
Set in Wakanda, the setting of the Black Panther films, it is said to be focused on Okoye (Danai Gurira), the Dora Milaje. No airdate has been announced.