The 2023 season at Melbourne Theatre Company will begin a decisive new chapter in its history. Artistic director Anne-Louise Sarks takes stewardship of an institution rocked by pandemic closures – it was, she concedes, “one of the most shut down theatre companies in the world” – and her first year of programming responds to the inflection point with an exciting blend of fresh and familiar works. 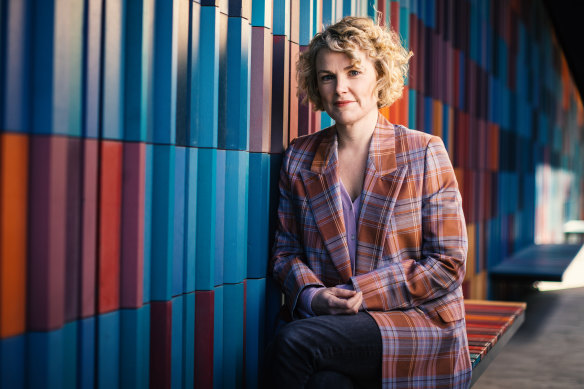 Sarks herself embodies both qualities. She is the first woman to lead the MTC, but her tenure also marks a return to the convention of having a practising theatre director in the role, after her predecessor Brett Sheehy (who had decades of experience programming major arts festivals) took a strictly curatorial approach.

Theatregoers can look forward to the vision of someone who’s lived and breathed the art from a young age. Sarks’ parents were heavily involved in the Genesian Theatre in Sydney – an amateur company named after the patron saint of actors, with alumni including John Bell, Bryan Brown and Baz Luhrmann – and she saw her first show at six or seven.

“I remember going into the dressing room and taking a feather from a feather boa afterwards,” she says. “And I still get a thrill when I walk backstage. Everything artists bring to make a show work – I love the sense of community, the spirit of that, I think.”

Sarks knows Melbourne’s theatre community intimately. Her career took flight as a founding member and eventual head of The Hayloft Project, part of a flourishing of independent theatre earlier this century.

Since then, she’s taken theatre across the world from London to Mexico, India to Finland – extensive globetrotting which confirmed for her the artform’s cultural importance and inclusive power.

“In the UK, theatre is an integral part of their sense of self. It’s at the centre of society; it isn’t peripheral,” Sarks says. “There’s something we can take from that, and it’s something the MTC should do – tell our stories to make sense of where we’ve come from, who we want to be, what is possible here.”

Her programming puts that principle into action. Six of the 12 offerings in 2023 are new Australian works, reflecting a compelling diversity of experience.

There’s Suzie Miller’s bruising #metoo courtroom drama Prima Facie, which recently took the West End by storm; Anthony Weigh’s Sunday, a fantasy woven from the life of and myths surrounding Sunday Reed, a pivotal figure in the bohemian circle at Heide – including such figures as Sidney Nolan, Albert Tucker and Joy Hester – that brought radical change to Australian art in the 1940s.

Oz comedy veteran Tom Gleisner teams with Katie Weston to produce an original musical satire, Bloom, centred on the crisis in aged care, while the year ends on a distinctly festive note with A Very Jewish Christmas Carol – reframing Dickens’ classic fable in the heartland of Melbourne’s Jewish community.

Other works engage emerging artists as well as some of our most accomplished performers.

It should be fascinating to witness the Australian premiere of Aleshea Harris’ Is God Is – a mash-up of revenge tragedy, Afropunk, and spaghetti western – brought to life by a diverse team, and just as intriguing to see comedian Judith Lucy tackling Samuel Beckett’s Happy Days.

Anyone who cares about acting will hotly anticipate Zahra Newman channelling the tormented genius of Billie Holiday; Helen Morse and Alison Bell performing in a Caryl Churchill double bill; and Kate Mulvany taking on Sarah Bernhardt – the greatest actress of the Victorian era and the first woman to play Hamlet to worldwide acclaim.

Anne-Louise Sarks says gender equity wasn’t something she kept consciously in mind during programming, yet the 2023 season flaunts a wealth of talented women in Australian theatre, and that’s something to celebrate as artists and audiences reconnect.

The full MTC 2023 season program can be viewed at www.mtc.com.au.