Home » Lifestyle » Melbourne’s much-loved community footy match is back, and with $100k to boot

Melbourne’s much-loved community footy match is back, and with $100k to boot

Many musicians say it’s the only sporting event they will go to – and it’s a very Melbourne idea, marrying the two.

The much-loved annual Reclink Community Cup returns on Sunday to Victoria Park after a two-year absence. 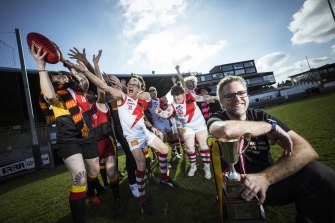 Reclink CEO Dave Wells in the foreground as the Megahertz and Rockdogs fly for a mark in preparation for the Community Cup. Credit:Chris Hopkins

A team of musos, the Rockdogs, will battle it out on the footy field against a team of radio and media crew, the Megahertz; some are fit, former players and completely across the game, others, not so much.

That’s part of the fun: seeing people we know for one thing in a completely different dimension, some clearly – yet happily – out of their comfort zone.

“A lot of people in the music industry would tell you that it’s the only sporting event they ever go to,” Reclink chief executive Dave Wells says. 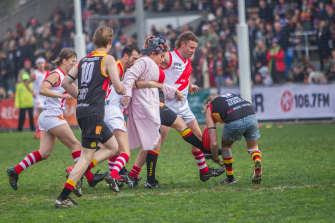 Action on the field during the last Reclink Community Cup in 2019.Credit:Scott McNaughton

“It’s very quirky, there’s an element that it’s people that you know and love out of their comfort zone.

“You see them on stage and then suddenly they’re playing football. The antics around it are obviously a lot of fun as well.”

About 12,000 people usually attend, often raucous and wildly enthusiastic, some in madcap costumes. This year the excitement will ratchet up a few notches, with the event back and the world turning again.

An impressive lineup of bands, including Cash Savage & The Last Drinks, will perform at regular intervals throughout the day.

The Cup is hugely entertaining, but it’s also staged for a good cause – it’s the main fundraiser for not-for-profit organisation Reclink, which provides sport and recreation programs for people experiencing disadvantage.

The event’s absence in the past two years left a big hole in Reclink’s funding.

Wells says, historically, the Community Cup has been supported and backed by the music and hospitality industries.

“We all know those industries have been hit really hard, so Reclink has struggled to go to them cap in hand to ask them to support the event again.” 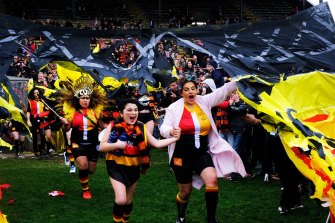 The Rockdogs enter the oval for the Community Cup in 2019.Credit:Suzanne Phoenix

“The government has really stepped in and said that’s fair, we can support the event so those industries don’t have to,” Wells says.

One of the main programs to benefit from the additional state government funding, he says, is the organisation’s football league. It has 18 teams across Melbourne made up of players mainly from its rehabilitation and homelessness centres – participants who wouldn’t otherwise get to play.

In Melbourne, broadcasters from community radio stations Triple R and PBS make up the Megahertz, while an array of musicians play in the Young and Jackson Rockdogs.

Since its inception in 1993, the Community Cup has spawned interstate equivalents in Hobart, Adelaide, Fremantle, Brisbane, Sydney and Canberra. Prime Minister Anthony Albanese has been a big fan of the Melbourne event, attending several times, and has played in the Sydney cup. 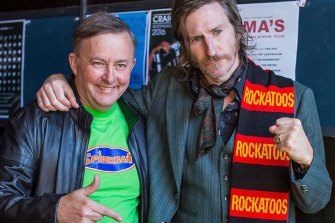 Reclink also runs a basketball league for women from the Muslim community.

The Victorian Minister for Creative Industries Danny Pearson said the new funding ensures that support from Victorians will go to those who need it most, while backing our live music industry.

“The Reclink Community Cup showcases the best of Victoria’s community spirit with music and footy coming together to raise money for a great cause,” he said.

The theme for Sunday’s event – the 26th staging of the Cup – is “Let Love Rule”, in honour of Gunditjmara/Bundjalung singer-songwriter Archie Roach AM and his musical and charitable contributions over the decades. The title is taken from his seventh studio album and song of the same name.

The Reclink Community Cup will be held at Victoria Park, Abbotsford, on Sunday, June 19.