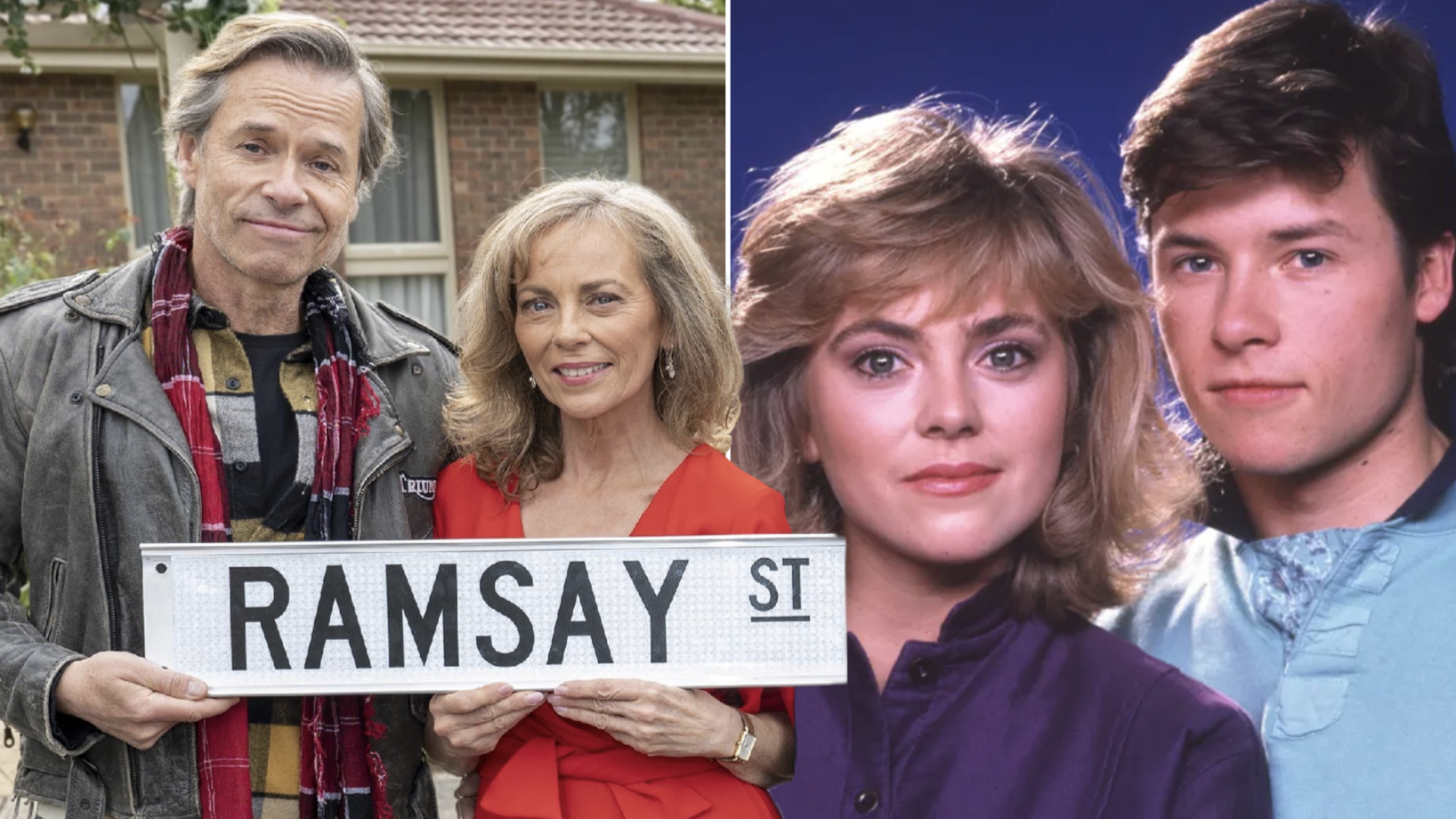 It’s a reunion that’s over three decades in the making, as iconic Neighbours couple Mike Young and Jane Harris, whose romance kept viewers hooked during the 1980s, reconnect just shy of the show’s ending, and we’re not crying, we promise.

Guy Pearce, who played Mike for three years between 1986 and 1989, will reprise his role in the Channel 5 soap’s final episodes, which will air next week.

Mike rocks up in Erinsborough in history-making scenes, and his comeback certainly takes a number of Ramsay Street’s finest by surprise.

Jane, however, is impacted the most, completely and utterly taken aback by her ex-lover’s shock return.

Pictures of Mike and Jane’s reunion see the two share a moment outside Lassiter’s hotel, as they reminisce and catch up about what’s been going on in their lives.

Mike’s return, while well-received by many, will ultimately throw a spanner in the works for Clive Gibbons (Geoff Paine), who had been hoping to rekindle things with Jane following their break-up.

Jane, as viewers know, has dated Clive for a number of years, but she ultimately ended their relationship when she discovered he’d betrayed her by harbouring a huge secret about the nature of his relationship with Danielle Pendlebury (Christine Stephen-Daly).

Clive has been hellbent on winning back Jane’s trust, and he makes a huge gesture next week in a bid to do so.

His efforts, however, are ultimately thwarted by Mike’s comeback.

Jane will subsequently take Mike on a tour of Ramsay Street, as they reflect on their history before the houses go up for sale during the Aussie serial’s final episode.

Old feelings will stir for the former lovers, but will passion ensue once more?

That remains to be seen, but Clive, struggling with his jealousy, lashes out, and a major showdown ensues!

Clive, enraged, comes to blows with Mike, and the duo proceed to fight… over a lamp!

Neighbours, as viewers know, is set to conclude later later this month, after Channel 5 controversially decided to drop it from their schedules in favour of ‘original UK drama’, which the broadcaster claims has a ‘strong appeal’ for audiences.

A number of famous faces from years gone by have, and will continue to, pop up throughout the final few weeks.

It was confirmed in June that Guy Pearce would be one of those former faves, as he returned for the first time since his departure in 1989.

‘It is very exciting and surreal at the same time being back on set again, however it feels like coming home,’ said the actor, who has starred in the likes of Iron Man 3 and Mare of Easttown.

‘It’s where it all started for me professionally.

‘I’ve been asked to come back on occasions over the years and wondered if it was the right thing to do, but once I knew the show was finishing, I knew I had to do it.

‘While I’ve caught up with many of the cast I worked with on the show over the years, there is nothing like being here all together again.’

Neighbours airs these scenes w/c Monday July 25 at 1:45pm and 6pm on Channel 5. The final ever episode will air on Friday July 29 at 9pm.