Fifteen years after hanging up his gloves, Mike Tyson will step back into the boxing ring to take on Roy Jones Jr., and HollywoodLife has EXCLUSIVELY learned Tyson’s ‘excited’ to throw hands once again.

Mike Tyson “is feeling great” ahead of his match against Roy Jones Jr., a source close to the boxing icon tells HollywoodLife EXCLUSIVELY. Tyson, 54, will square off against the 51-year-old Jones Jr. in an eight-round exhibition match at the Staples Center in Los Angeles on Nov. 28. It’s been fifteen years since Mike’s last professional bout – and two years since Roy Jones Jr. retired – but despite this, Mike is “really excited” for the fight. “

“It’s going to be a night of entertainment because he’s got these great music acts and boxing,” the source tells HollywoodLife, referencing how Lil’ Wayne, French Montana, DaBaby, Wiz Khalifa, and YG are scheduled to perform “multi-song sets” before the fight. Mike will also walk out to the ring to Tiki Lau’s “Mike Tyson,” a song that features the former Undisputed Heavyweight Champion of the world. In addition to the music acts, the fight card includes six other matches, including Jamaine Ortiz versus Nahir Albright, Badou Jack versus Blake McKernan, and Jake Paul – yes, that Jake Paul – taking on Nate Robinson. 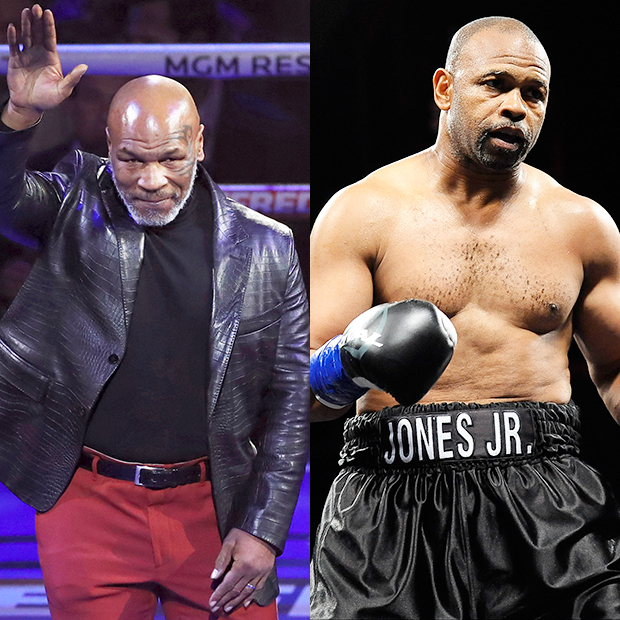 “Besides training this week,” the source tells HollywoodLife, Mike is “spending time with the family and just focusing on the fight. He’s really getting ready and taking it very seriously. He’s extremely focused. He’s training and shooting this docuseries and still a father and husband and balancing it all right now.” The man once called “The Baddest Man on the Planet” has partnered with Triller for a docuseries about this highly-anticipated return to the ring.

Despite all this extra activity – the music, the family, the docuseries – Mike is still keeping his eye on the showdown on Nov. 28. “This fight is very important to him,” the insider adds, “especially because he’s giving back to charity.” Mike confirmed this during an episode of TMZ Live, saying that he’ll be donating his cut from the fight. “It’s going to be for various charities, so nobody’s gonna have to worry about me getting rich or being jealous and saying I’m doing this for money,” Tyson said. “I’m not getting anything, and I just feel good doing this because I can.”

This fight was initially supposed to take place in September but was postponed a few months. The fight will include eight three-minute rounds, 12 oz boxing gloves, no headgear, and no official judges to score to the fight. “It’s an exhibition,” California State Athletic Commission executive director Andy Foster told BoxingScene.com. “They can exhibit their boxing skills, but I don’t want them using their best efforts to hurt each other. They’re going to spar hard, but they shouldn’t be going for a knockout. This isn’t a record-book type of fight. This is not world-championship boxing right now.” However, a trio of former champions –– Chad Dawson, Christy Martin, and Vinny Pazienza – will be “scoring” the bout remotely for the WBC.

Roy Jones Jr. (66-9, 47 KOs) last fought in 2018. The fighter won championships at the middleweight, super middleweight, light heavyweight, and heavyweight classes. He’s considered by many to be one of the best boxers, pound for pound, in the sport’s history. He has less ring rust than Tyson (50-6, 44 KOs), who last fought professionally in 2005, after quitting a fight against Kevin McBride.