Home » Mud, blood and a f—load of swearing: Is Deadwood the best Western ever?

Mud, blood and a f—load of swearing: Is Deadwood the best Western ever?

DEADWOOD ★★★★★
Where and when: Apple iTunes and Fetch, now

David Milch’s down-and-dirty Western, which ran over three seasons from 2004 with a standalone movie in 2019, might just be the finest example of world building ever committed to screen. It’s not just that its setting is so brilliantly conceived and meticulously detailed – it’s that the gold-mining town of Deadwood, South Dakota (it was a real place) emerges before our very eyes as the series progresses.

As Deadwood grows from tents to timber shanties to a proper town, it’s like Sim City made flesh. Though with its obsessive focus on actual human flesh and the many ways it can be corrupted, perhaps that should be Sin City. 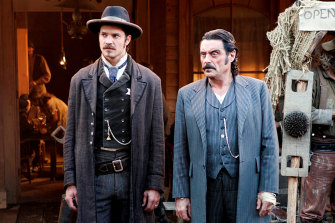 Amid a multitude of magnificently realised characters, the chief protagonists are two: the brothel-owning, murder-dispensing, expletive-dripping Al Swearengen (Ian McShane), one of the greatest screen villains ever, and the trigger-happy lawman Seth Bullock (Timothy Olyphant). Both are based on historical figures, though series creator David Milch fleshes them out with great flourishes of lurid imagination.

At first glance the two men appear to represent diametrically opposed world views and moral positions, but on closer inspection it’s clear they are really just different expressions of the same dynamic. Swearengen is drifting towards regulation, despite his predilection for havoc, while Bullock’s professed commitment to the rule of law is in constant struggle with his impulse to summary violence. Together, they represent the tension between order and chaos that pertains in any society inching its way towards ostensible civilisation.

(In case all this relentless and wanton violence seems a bit far-fetched – hell, it’s almost as dangerous as some of those quaint English villagers beloved of Inspector Morse and co – it’s worth noting that legend has it that the real Deadwood hosted a murder a day at the height of its lawlessness in the late 1870s.)

But it’s not just the world building that makes Deadwood so special – it’s the words too. Milch came of age on Hill Street Blues, and co-created NYPD Blue (with Steven Bochco). Those shows were renowned for their gritty realism, but Deadwood steps it up a notch. It is the fullest, purest, foulest and most fast-talking expression of Milch’s take on human struggle.

(For an insight into his life, which includes heroin, alcohol and gambling addiction, and his creative process, which includes dictating dialogue as it comes into his head, check out Mark Singer’s superb 2005 profile of Milch in The New Yorker).

Al’s almost-Shakespearean approach to cussing (Swearengen by name, swearing by nature) and his propensity for monologues delivered while being fellated or surrounded by topless brothel workers arguably paved the way for Petyr Baelish’s similarly X-rated dissertations in the early seasons of Game of Thrones. At any rate, it’s frequently hilarious, if your ears can withstand the battering.

That Deadwood never received anything like the attention or acclaim it deserved is a bit of a travesty, but it’s not too late. For those brave enough to visit, a whole world of blood, mud and foul language awaits. Saddle up and git; there’s gold in tham thar episodes.