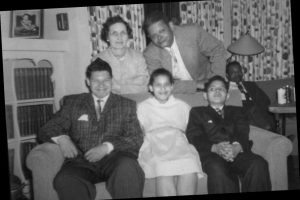 On a Sunday afternoon in 1954, 6-year-old E. Dolores Johnson and her siblings were admiring ornamental welding — created by their father — on a bridge in Buffalo, NY, when police lights started flashing behind the family’s car.

“Well, what do we have here?” said one of the white officers as he approached the driver’s seat where her dad sat. “A n—er, a white woman and their three mongrels.”

Her father froze. “Take this speeding ticket and go back where you came from,” the cop hissed.

At the time, Dolores didn’t understand why the officer had treated them that way — or that her parents’ interracial marriage was illegal in half the US because of anti-miscegenation laws.

But memories of that incident, and many more like it, set Dolores on a quest to unravel the truth about her biracial identity, and why her white mother chose to cut all ties with her own family. Dolores details her journey to The Post and in a new book, “Say I’m Dead: A Family Memoir of Race, Secrets, and Love” (Lawrence Hill).

“I was a full-grown woman when I finally realized that my mother had to come from somewhere,” said Dolores, who was 31 when she began the search for her mom’s relatives. “I was raised as a black person — my mother’s biology never counted in my identity before.”

Her mother, Ella Jackson, had never introduced her husband, Charles, or their three children to anyone in her family. She never spoke of them or her own past.

She decided to dig into her mother’s history after her own horrific experiences with racism while living in Baton Rouge, La., in the mid-1970s.

Dolores, who graduated from Harvard Business School, and her husband, Luther, who was black, both had new jobs in the state — he at a chemical plant, she at a phone company — and bought a house there. Soon after they moved in, the couple heard a loud banging on the door one night.

“There was a cross burning on the lawn,” she said. “The cross, of course, means the Klan.” She called police, but they were racists, too.

When the officers arrived, they questioned neighbors about what Dolores and Luther must be doing wrong to deserve it.

“You must be some good n—ers,” the policeman said. “Because nobody seems to want to make a complaint against you.”

A friend then explained that David Duke, the grand wizard of the Ku Klux Klan, was stationed nearby. “We were scared to death,” Dolores recalled.

After three years of harassment, the couple moved to New Jersey. Finally able to catch her breath, Dolores decided to press her mother for the truth about her past.

Ella, who grew up in Indianapolis, came clean at last. “When I left my family, I never meant for them to find me,” she told her daughter. “They think I’m dead.”

It all came down to the dangers of Ella, who was white, marrying Dolores’ father, who was black.

When the two started dating in 1942, they kept it a secret to protect themselves and their families. As their relationship progressed, Ella recalled Charles kept telling her, “I’m going to get lynched.”

“It was unthinkable to marry across the color line,” said Dolores.

Determined to stay together, the couple fled to Buffalo, in 1943. Charles had family there and they could legally marry, even if their relationship wouldn’t always meet the approval of locals.

The day she left Indianapolis — secretly, with her husband-to-be — Ella told her parents she was visiting an old friend in Massachusetts, and disappeared without a trace.

Three decades later, Dolores learned her mother had been a federal missing-person case: “There was an FBI investigation [that] went across four states. They told the family that she was a victim of foul play and . . . either murdered or sold into slavery.”