“I did have moments when I looked at him and I hated him.”

On Wednesday’s episode of “The Bellas Podcast,” the new mom, who welcomed son Matteo with fiancé Artem Chigvintsev on August 31, detailed how her postpartum depression led her into a “dark, deep hole” and even caused her to feel hatred toward Artem. 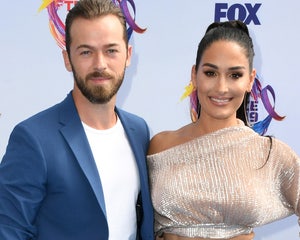 Nikki Bella Opens Up About Postpartum Sex with Artem Chigvintsev

Nikki began the conversation by expressing her sadness that she recently had to pack up her “dream home” in Phoenix to move back to Los Angeles, where Artem is currently a pro dancer on “Dancing with the Stars.” While packing, Nikki was also taking care of Matteo and filming “Total Bellas,” causing her to become overwhelmed.

“I had Matteo on my own; still had a whole house to pack up — I did have help on that, but you still have to do so much — filming on top of it, and I had a massive breakdown,” she explained.

“I love being the best, I want to be number one,” Nikki added. “I’ve realized I’ve taken that mentality as a mom. I’ve always prided myself that I can fight a lot of things mentally. I’m very strong in that way.”

The former WWE star said she “broke down” because she “refused to ask for help,” however, that was when her twin sister, Brie Bella, stepped in.

“When you’re stubborn like you, Nicole, and you want things your way so you kind of don’t accept the help, it makes it even harder,” Brie explained and Nikki recalled, “I think Brie, was the first person who’s asked me in weeks — it was in front of Bryan — she goes, ‘How are you doing?’ I was about to say, ‘Fine.’ And my lips started shaking and I burst into alligator tears. Like, I broke down. Because that was the first time someone asked me in a while how I was doing, and I wasn’t doing okay.”

Brie said she realized Nikki was “lonely” and worried her sister was becoming depressed. When Nikki went to her week seven checkup, her doctor brought up the topic of postpartum depression and Artem’s absence.

“People have been worried about me. I’m like, why? I don’t think Artem’s gonna cheat, or hook up,” Nikki told her. “I’m not jealous so why do I feel this way? And it is crazy, all of a sudden I started to realize I’m falling into a postpartum depression.”

“I didn’t realize at week seven, you kind of come out of your baby blues and … go two different paths,” she continued. “You go the path of being healthy or you go down the path of being depressed, and that depression path can be a really dark, deep hole. I was starting to feel invisible.” 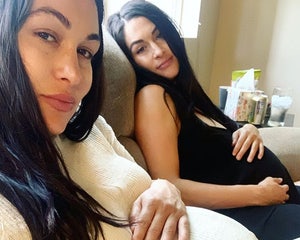 Nikki and Brie Bella Share Photos of Their Sons For the First Time, Reveal Baby Names

“Postpartum has knocked me on my ass,” she later added. “This is something that is way different.”

The “Total Bellas” star said she didn’t initially tell Artem how she was feeling, causing it to “build up.” Nikki noted that she eventually opened up to her fiance, revealing he said he was worried she “hated” him.

“I felt bad for Artem because it made him feel terrible and then he’s like, ‘I wish you came to me sooner,'” Nikki recalled. “He was just so sad at the fact that I was feeling all these things and I never told him.”

“He’s like ‘At times, I felt like you were starting to hate me.’ He’s like, ‘You could be mean.’ And I’m not gonna lie, I did have moments of being mean,” she continued. “I did have moments when I looked at him and I hated him.”

Got a story or a tip for us? Email TooFab editors at [email protected].