Trust Marilyn Monroe to put it in a nutshell. “You think every girl’s a dope,” she chides Tom Ewell in The Seven Year Itch (1955). He assumes a woman would always go for “the great big lunk” at the party, the alpha male with money and self-assurance and “that I’m-so-handsome-you-can’t-resist-me look”. But no.

“There’s another guy in the room, way over in the corner. Maybe he's kind of nervous and shy and perspiring a little. First, you look past him. But then you sort of sense that he's gentle and kind and worried. That he'll be tender with you … That's what's really exciting.”

Throw in a montage of walks in the park, a best friend who is either a gay man or a fatter, plainer woman – but either way, loves a shopping trip – and some peppy pop hits and what you have right there is the basis of pretty much every romantic comedy that ever there was. If you can see past sleazy Hugh Grant, Bridget, you’ll spot dull but decent Colin Firth. If you ditch that guy from Mad Men, Kristen-whatever-you’re-called-in-Bridesmaids, you will nab lovely Chris O’Dowd in his policeman’s uniform. Meg/Sally! Forget dating! Funny old Billy Crystal/Harry may have been crude and rude when you first met him, but anyone can see now that he’s such a nice guy! 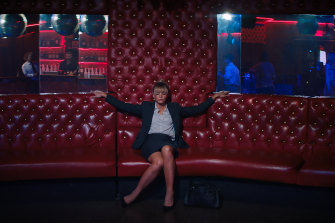 Carey Mulligan in a scene from Promising Young Woman.Credit:Focus Feature

Where are they now, these nice guys? Follow any thread of debate about Emerald Fennell’s film Promising Young Woman and you will soon see that question asked, somewhat tremulously. The promising young woman of the title is Carey Mulligan’s Cassie, who sets out to avenge the rape of her friend years before at a college party by shaming other men who think they are nice. Every week she goes to a city bar, pretends to be falling-down drunk and waits for a Galahad to peel her off the banquette and see her home safely.

Except that they don’t. Every time, someone shoulders her into a taxi, telling her she’s OK. Every one of them then seizes the opportunity to push her into sex when she is too floppy to resist. Turns out that they – like Cassie’s friend’s rapist, like the mates at that party who let it happen and then circled the wagons to defend him – weren’t very nice at all. Even the young man who gently courts her turns out to have been a bystander at that event: not malicious, but not innocent either. His niceness is as hollow as a puffball. 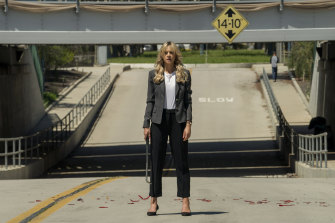 Emerald Fennell has said that she wanted Promising Young Woman (starring Carey Mulligan, pictured) to be a blend of genres: a revenge thriller with the look and feel of a romcom. Credit:Merie Weismiller Wallace/Focus Features via AP

Fennell has said that she wanted Promising Young Woman to be a blend of genres: a revenge thriller with the look and feel of a romcom. There are songs by Britney and Paris Hilton and a lot of pink accessorising. There are even jokes. What it doesn’t have is romance. Actually, its central question has to be whether romance is even a viable thing.

Reports of the death of the romcom have been rolling in for a couple of decades. So far, they have proved premature. Arguably, the golden age for romantic comedy was the 1940s, when formidably intelligent women such as Katharine Hepburn and Rosalind Russell locked horns with Spencer Tracy or Cary Grant, film “full of competition and gamesmanship and verbal battles between the sexes”, to quote critic Wesley Morris in The New York Times.

The abbreviated term took hold, however, during the '80s. In 1988, two of the five Best Picture nominees at the Oscars were romantic comedies: Broadcast News and Moonstruck. In 1989, Working Girl and The Accidental Tourist (which wasn’t branded a romcom, but sort of was one) made the list. That efflorescence reached peak Nora Ephron at the end of the decade with When Harry Met Sally, a pinnacle of wit and spark between its stars. And it took 20 years to wind down, eventually to be overtaken by the souped-up, boys’ own version of relationships in Judd Apatow’s films. Knocked Up and the sublime Steve Carell comedy The 40-Year-Old Virgin felt oddly more like real life, or at least a side of fantasy life that was actually funny.

Until the last few years, when the romcom rose again with even more luxurious homes, prettier protagonists and more monstrous weddings than ever: cue Crazy Rich Asians, a romcom star-crossed with a family soap opera that, along with the indie The Big Sick by Kumail Nanjiani, finally put paid to the genre’s unspoken whites-only policy. The TV films made for Netflix et al, aimed at younger audiences watching in private, had already rewritten that rule book; maybe there was more room to innovate than anyone had thought. 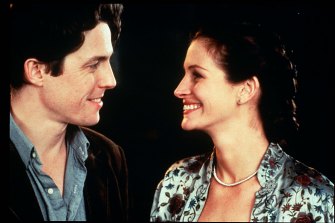 Hugh Grant and Julia Roberts, pictured in Notting Hill, are both romcom classics.

Now, though. Emerald Fennell wrote Promising Young Woman before the rise of #Metoo, but one of her inspirations – which offered her a template of sorts – was the fact that so many of the romantic comedies she watched growing up featured drunken sex. Passing a girl around between the lads was a joke. She won’t name the culprit films, but just cast your mind back to Sixteen Candles (1984), the John Hughes teen romcom, in which the nerdy nice guy wakes up thinking he had sex with his friend’s girlfriend, who was flat-out drunk; neither of them can remember. A bit rapey, no? And all played for laughs.

Promising Young Woman turns into some dark corners, but it mostly bounces along too. It does work like a romcom. Watching romcoms, we just want the heroine to be happy forever. The same with a revenge movie; we want the avenger to be victorious. But if you can’t rely on anyone, including the women at the university playing the men’s game, then there no chance of future happiness and no point in victory. We are in the world of this year’s break-out hit The Assistant, where the boss is a seedy predator, the boys in the office join in sneering at the women he belittles and bullying anyone closer to hand. One thing is sure; nobody is looking for love. 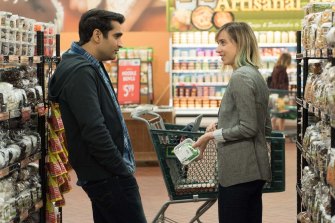 But without nice guys, what love is on offer? That puts the romcom out to grass.

“It’s easy to feel as if we’re in the midst of a major reconsideration, one in which the work of partnership has to wait,” writes Morris. “There’s too much personal work to be done — corrections, upheavals, inclusions, re-imaginings, representations.”

A friend suggests we’re in the era of the Me-Com, an anti-romance strand descended directly from Legally Blonde (2001), which is all about working a world effectively without men, alone or with your Cosmopolitan-quaffing mates. And hey presto, I see another Sex and the City series is on the way. Right time, right stuff. Those ladies are not very nice either, but their shopping trip montage should be to die for.