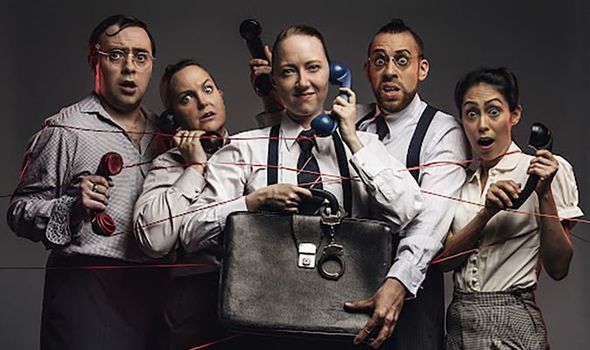 All they needed was a dead body they could dress up as a pilot with a briefcase of fake documents attached to its wrist to be found by the enemy. In other words, a Trojan Corpse.

Comedy troupe Split Lip’s five man army of performers ‑ three women and two blokes, in fact ‑ deliver a miraculous musical that tells the entire story in a kind of accelerated farce that is part Mel Brooks, part SIX, part Hamilton with a side order of One Man,Two Guvnors.

The quick change antics are perfectly timed as the hardworking gender-blind cast morph from Men from the Ministry to sailors to typists-with-ambition to spies and song-and-dance Nazis ‑ the latter in a number that equals Springtime for Hitler in the hilarious-bad-taste stakes.

The manic, cartoonish style is leavened by moments of surprising poignancy such as the love letter song Dear Bill delivered by loyal spinster secretary Hester (Jak Malone, who also plays a Cabaret-style pathologist who is half Joel Grey/half Liberace) with such emotional delicacy it silences the entire audience for several minutes.

The articulate lyrics fizz and bubble with wit, the small band switches from Variety Hall knees-ups to rap with ease and the lighting is exemplary.

The set consists of little more than five telephones on pedestals. In a show that is brimming with confidence, nothing else is needed. Extraordinary in every way.

Operation Mincemeat is at the Southwark Playhouse until September 18