Over 30 years ago, Diana Gabaldon began writing a story about a man in a kilt with no idea what it would one day become: the best-selling nine-book series Outlander, adapted in 2014 into a hit Starz TV show featuring Caitríona Balfe and Sam Heughan as romantic leads Jamie and Claire Fraser. As we eagerly await the sixth season of Outlander coming out on March 6, we had a chance to catch up with Gabaldon about everything in the Outlander universe — from the book scenes she wishes made it to television to what we can expect in season 6 of the Starz show, plus details on the recently-released ninth book in the series, Go Tell the Bees That I am Gone, and whether she thinks there will be an eighth season of Outlander (season 7 is already confirmed, phew). Oh, and she might have also hinted at the tenth book in the series, in case you’ve already speed-read your way through all 900 pages of Go Tell the Bees That I am Gone. But don’t ask her if she’s started it (Oops we did!).

With yet another best-seller under her belt (Go Tell the Bees That I Am Gone, released November 23, 2021, is already a #1 New York Times best-seller), Gabaldon is busier than ever — and just like reading her novels, her answers to our questions had us hanging on every word. Check out our full conversation with author Gabaldon below.

SheKnows: What is one book scene for each season that you were sad never made it into the show?

Diana Gabaldon: Look, the books are the books and the show is the show. I expect it to be different. It could hardly not be; one season of the show is (roughly) twelve episodes — twelve hours. It takes anywhere from 32 to 49 hours just to read one of the books aloud. I know; I read the first three myself, for (what was then) Recording for the Blind and Dyslexic — I was a volunteer reader for them for 27 years, until life and travel got so hectic that I couldn’t reliably show up every week. (Now they’re called Learning Ally, and produce recordings for people with all kinds of learning/visual difficulties. I still support them, but don’t read).

The point, though, is that the show has to be an adaptation of the books, not a translation. Ergo, most of the book won’t fit into a season, and what’s used will have to be restructured in order to make a coherent story on film. There are what the show people refer to as “iconic” scenes — ones of high drama or particular appeal, that all the readers love — and they try very hard to include those or at least make a reference to them.

The only one that comes immediately to mind that I had a real issue with was the leave-taking scene in Season Two, where — in the book — Jamie asks Claire to mark him with his sgian dhu, so that he can carry her touch with him into battle, and they end up marking each other (and carrying each other’s permanent mark through the years of separation). OK, I can see several reasons why that might be difficult to film (and I can see the nuisance of having to keep painting small scars on the main characters’ hands every time they get dressed (they do paint Jamie’s (faded) body scars on every time he takes his shirt off) — but deciding that, instead of this moment of high drama, Claire should hand Jamie the chunk of amber that Hugh Monroe gave her years ago (which is big, orange and looks like a chunk of broken telephone-line insulator, and why would she have been carrying it on her person for the last three years?)…”Here, darling, keep this Ugliest Wedding Present Ever to remember me by for the rest of your (extremely short) life…” Mmm.

Still, that’s one scene out of hundreds, and on the whole, they do a great job of keeping scenes that they know are emotionally important to the readers.

SheKnows: What can you tease about Book 9 — or if you could describe each person’s story in one word or sentence what might it be?

DG: What is this? English 101? Back in the day (way back — like, thirty years ago), when there were mall bookstores, I would be sitting at a little table to sign books, should anyone feel the urge to buy one. People would come up (occasionally), pick up the book, frown at it, and read “A…Novel”, off the cover. “Is that, like, fiction?” I would assure them gravely that it was, engage them in conversation and finish by saying, “Open it anywhere and read three pages. If you can put it down again, I’ll pay you a dollar.” I’ve never lost any money on that bet. In lieu of flipping the pages, though, here are the first few chapter titles…

Part One: A Swarm of Bees in the Carcass of a Lion Chapter

Chapter 1: The Mackenzies Are Here

Chapter 4: The Women Will Ha’ a Fit Chapter

Chapter 5: Meditations on a Hyoid

Chapter 6: Home Is the Hunter, Home from the Hill

Chapter 30: You Should Know…

“Jamie and Claire’s relationship…like a pair of stones standing in a turbulent stream.”

SheKnows: You write great moments from your own life that you incorporate into the books, are there any of those in book 9? How long is book 9 compared to others in the series?

DG: Well, it’s not the shortest of the books, but neither is it the longest. It runs about 449,00 words, as compared to Outlander (the shortest, at 305,000) or The Fiery Cross or A Breath of Snow and Ashes, which each (coincidentally) came in at 508,000.  (“Exactly the same length as SHOGUN,” as I pointed out to my editor at the time.)

SheKnows: How far have you gotten in writing book 10?

DG: Are you kidding? I finished writing BEES at the end of July, then spent the next three months doing the various (intense) phases of production on the manuscript (while simultaneously working with my German translator on the German edition). Had about two weeks to breathe after the final galleys went back, went to Europe (a combination of work and pleasure) for two weeks, and then came back to find 20,000 copies of BEES waiting for me to sign them. Interrupted this laborious process to fly to New York for the Gala Virtual Launch, back for Thanksgiving (two days later), then returned to a massive book-signing, punctuated by (counting on fingers…) twenty-nine interviews, so far. You’re #30…

(I’ve begun twiddling the dials on Book 10 and the Prequel, but this amounts to a handful of scenes. Y’all might as well just chill; a book takes as long as it takes, and constantly asking the writer for progress reports is just as helpful as pulling up a seedling every other day to see if it’s growing yet.)

SheKnows: Do you hope that the TV show will carry on past season 7, or do you feel that if they needed to they could end it in a way that honors your story?

DG: Well, there are a LOT of considerations that go into a television show — cost being only one of them (but it’s a fairly big consideration, especially with the enormous problems of maintaining Covid protocols and safety on a set involving 250 people). Others being the needs of the cast members, some of whom might want to follow other career opportunities (cf. Lauren Lyle, who’s got the lead in a new TV crime drama called Karen Pirie). Yes, I’d like the show to continue past seven seasons, but I have no idea whether it will or not. The show people have talked to me about various possibilities, and I think things will be all right, one way or another.

DG: I think so, and yes. You know, I suppose, that we were obliged to cut Season 6 from the original twelve episodes, to eight (in part owing to the aforementioned Covid complications, and in part to Caitríona’s pregnancy) — the remaining four episodes from Season Six will be folded into Season Seven, which will thus be 16 episodes long, mirroring the long first season. So the last episode of Season Six is 608. I wrote Episode 609.

This script can’t simply be reused at the beginning of Season Seven, because it wasn’t structured in the way an opening episode needs to be, either in terms of content or shape. They did use a few bits from it, but the script as a whole isn’t usable for Season Seven (I did get paid for writing it, though).

The Production folk asked me if I wanted to write another script for Season Seven and I said I did.

SheKnows: You had a cameo in season 1, will you ever pop up one more time?

SheKnows: Go Tell the Bees That I am Gone — is that from Claire’s perspective, is she gone?! What’s the significance of the title and bees?

DG: Well, you know, if you read the book, you’ll find out…

Actually, it’s a reference to traditional bee-keeping. Bees are extremely social insects and are interested in gossip. That’s why beekeepers are encouraged to talk to their bees, and tell them the news of the community: if someone has come to visit, if a woman has left the community to be married, if a child has been born, if someone moves away—or dies.

If something of importance happens and you don’t tell the bees, but they find out later, they’ll be angry and swarm and fly away. So you always tell the bees what’s going on. “Go tell the bees that I am gone” applies in multiple places throughout the book with different meanings. 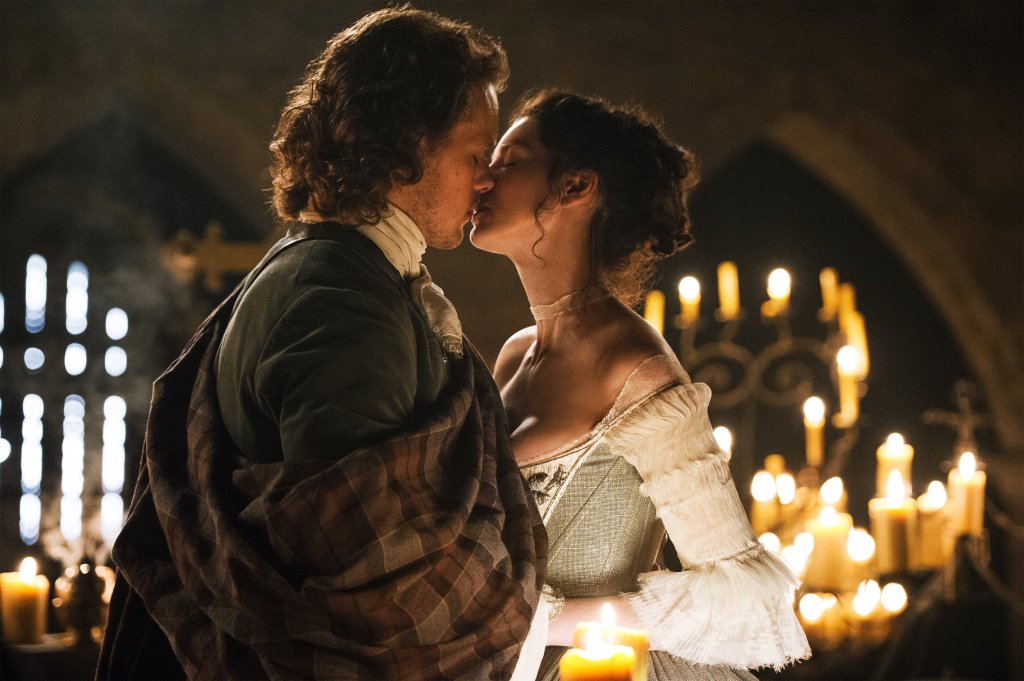 DG: Well, they’re in the path of an oncoming war, they know it, and they’re growing older.  So they’re coming to grips with the facts of each other’s mortality, as well as their own.

SheKnows: What’s been the strongest season of the TV show in your opinion? And the season you wish they could have fit more into?

DG: Oh, there are always things I (and the TV folk, as well) wish we could have done, but the fact is, there’s only so much room — and a LOT of book. Actually, I think Season Six is maybe the strongest since Season One (though I loved the first part of Season Three, and Season Five was really good, too).

SheKnows: Which character has one of your favorite moments in Season 6? If you had to use one word or phrase for Jamie and Claire’s relationship in season 6, what would it be?

DG: Hard to choose! All the main characters have really intense, wonderful moments in this one. As for Jamie and Claire’s relationship — like a pair of stones standing in a turbulent stream.

Before you go, check out the all-time best Outlander episodes you need to watch.