Overlooked No More: Ralph Lazo, Who Voluntarily Lived in an Internment Camp

Overlooked is a series of obituaries about remarkable people whose deaths, beginning in 1851, went unreported in The Times.

When Ralph Lazo saw his Japanese-American friends being forced from their homes and into internment camps during World War II, he did the unexpected: He went with them.

In the spring of 1942, Lazo, a 17-year-old high school student in Los Angeles, boarded a train and headed to the Manzanar Relocation Center, one of 10 internment camps authorized to house Japanese-Americans under President Franklin D. Roosevelt’s executive order in the wake of Japan’s attack on Pearl Harbor a few months earlier. The camps, tucked in barren regions of the United States, would incarcerate around 115,000 people living in the West from 1942 to 1946 — two thirds of them United States citizens.

Unlike the other inmates, Lazo did not have to be there. As a Mexican-American, he was the only known person to pretend to be Japanese so he could be willingly interned.

What compelled Lazo to give up his freedom for two and a half years — sleeping in tar paper-covered barracks, using open latrines and showers and waiting on long lines for meals in mess halls, on grounds surrounded by barbed-wire fencing and watched by guards in towers? He wanted to be with his friends.

“My Japanese-American friends at high school were ordered to evacuate the West Coast, so I decided to go along with them,” Lazo told The Los Angeles Times in 1944.

By the time Lazo left Manzanar, his social consciousness had deepened and his outrage over the indignities suffered by Japanese-Americans had grown. It would define how he lived the rest of his life, as an activist who sought to improve education for underprivileged groups and push for reparations for Japanese-Americans who had been interned. 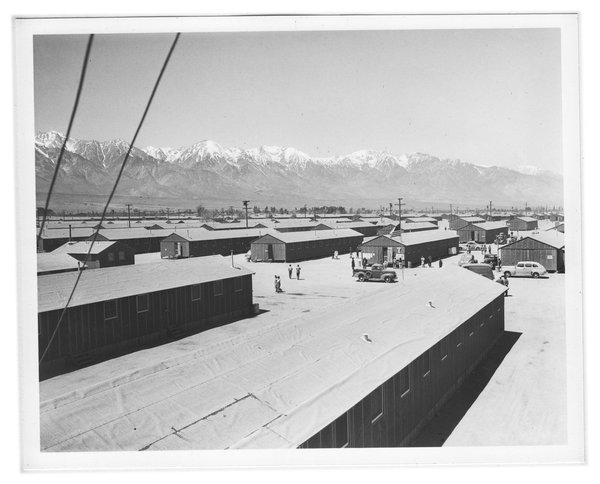 Unlike Lazo, most Americans were swept up by anti-Japanese sentiment propagated by politicians and the media. After the attack on Pearl Harbor, the Los Angeles Police Department shut down businesses in Little Tokyo, and teachers barred Japanese-American students from reciting the Pledge of Allegiance, Richard Reeves wrote in the book “Infamy: The Shocking Story of the Japanese American Internment in World War II” (2015).

By Christmas of 1941, F.B.I. agents were raiding the homes of Japanese-Americans and arresting them without due process. Public officials, including California’s governor and attorney general, endorsed the idea of detaining people of Japanese descent, even if they were born in America.

Though the Munson report commissioned by the State Department concluded that Japanese-Americans did not pose a national security threat, President Roosevelt signed an executive order on Feb. 19, 1942, that cleared the way for their evacuation and relocation.

Amid the hysteria, expressions of solidarity were rare, said Eric Muller, a professor at the University of North Carolina School of Law in Chapel Hill, and a scholar of Japanese internment.

“There were very small numbers of active allies,” Muller, who created a podcast about life in the camps, said in a phone interview. “There were almost no groups nationally in 1942 that stood up for and alongside Japanese-Americans.”

Lazo was born on Nov. 3, 1924, in Los Angeles, to John Houston Lazo and Rose Padilla. He and his family lived in the Temple Street neighborhood, near Little Tokyo. Lazo’s mother died when he and his sister, Virginia, were young, and they were left in the care of their father, who worked as a house painter and muralist.

At the ethnically diverse Belmont High School, Lazo counted Japanese-Americans among his closest friends. “I fit in very well,” he told The Los Angeles Times in 1981. “We developed this beautiful friendship.”

And as many Americans were distancing themselves from their Japanese neighbors — or worse, attacking them verbally or physically — his identification with his friends grew deeper.

Before he left for internment, he told his father he was “going to camp,” creating the impression that he was going to summer camp. His father did not press him, and neither did government officials whose system for entry into the camps relied largely on self-reporting, said Muller, the U.N.C. professor.

When Lazo’s father found out where his son had really gone, he did not reprimand him. “My father was a very wise man,” Lazo said in 1981. “He probably was very happy I was there.”

About 10,000 people were imprisoned at Manzanar, in the Owens Valley in eastern California. They lived in military-style barracks under a punishing summer desert heat. Despite their grim surroundings, the prisoners demonstrated resiliency, recreating the rhythms of normal life by running schools, newspapers, sports teams, gardens and hiking clubs, all of which the government allowed, Muller said.

Many at Manzanar were aware of Lazo’s ethnicity. One of his high school classmates, Rosie Kakuuchi, said that Lazo spent time amusing the orphaned children at the camp with games and jokes. He had a quirky way of telling stories, and one Christmas he rallied 30 friends to go caroling at the camp.

“We accepted him and loved him,” Kakuuchi, now 93, said in a phone interview. “He was just one of us.”

It wasn’t until August 1944, when Lazo was drafted into the Army, that the government discovered his secret, but he didn’t face any repercussions. In fact, the government issued a news release disclosing his unusual story, which led to The Los Angeles Times writing about it. Lazo served in the Pacific until 1946, receiving a Bronze Star for bravery among other honors.

After the war, Lazo earned a bachelor’s degree in sociology at U.C.L.A. and a master’s degree in education at California State University, Northridge. He married Isabella Natera and they had two sons and a daughter; they divorced in 1977.

Lazo maintained ties to the Japanese-American community throughout his life, attending Manzanar reunions and supporting efforts for government redress payments, which were eventually granted, along with an official apology, as part of the Civil Liberties Act of 1988.

In January 1945, shortly after a Supreme Court ruling that said the government may not detain “loyal” citizens, the War Department announced that internees were free to leave. Most of the 10 camps closed in quick succession, with the last of Manzanar’s prisoners released by Nov. 21, 1945.

(One of the sites, an old Army base at Fort Sill, Okla., was being considered last month as a place to house unaccompanied migrant children, drawing protesters who demanded that the government “stop repeating history.”)

Lazo worked as a high school teacher and later as an academic counselor at Valley College from 1970 to 1987, where he pushed for educational equity for Latinos and others.

“He was very committed, all his life, to what’s fair and what’s just and what’s morally correct,” Edward Moreno, a longtime high school principal who sat on committees with Lazo, said in a phone interview.

His story as a voluntary prisoner resurfaced in 2004 as the subject of the short film “Stand Up for Justice: The Ralph Lazo Story.”

But in his lifetime, Lazo sought to deflect the spotlight. In 1981 he urged a Los Angeles Times reporter to turn the focus away from him and toward what he considered to be the more important story.

“Please write about the injustice of the evacuation,” he said. “This is the real issue.”