Growing up the "weird" teen in south-west Sydney, the artist who goes by the nom de plume what, admired the Australian indie rock band, the Go-Betweens, and its singer-songwriter Robert Forster.

"I just loved him as a teenager being an Australian musician from Brisbane who for me had a sensibility of the New Romantic sounds of English music I was listening to but doing it in an Australian vernacular. I was just happy to find  something like that going in Australia."

The Katoomba-based artist was awarded Australia's richest art prize, the $150,000 Doug Moran National Portrait Prize 2019, for a portrait of Forster that judges said shimmered off the canvas like a "vibrating aura". 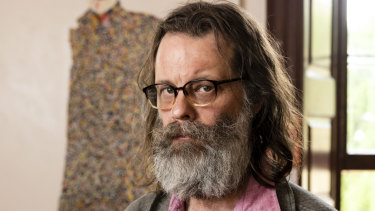 The artist what with his winning portrait of Robert Forster. Credit:Dominic Lorrimer

It was the artist's third formal portrait of Forster, the second being a finalist in the Archibald Prize in 2017.  With Grant McLennan, Forster co-founded and co-wrote the Go-Betweens' seminal hits, Cattle and Cane and Streets of Your Town. 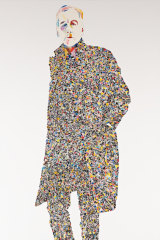 Robert Forster’s image ”hovers on the surface of the canvas like a vibrating aura”, judges of the Doug Moran Portrait Prize said.

Due to leave on an American tour later this week, the musician was not in Sydney for the announcement.

"I went to school in south-west Sydney and it was pretty brutal," said the artist who goes by the unusual moniker. "Actually, it was very football oriented and I was the weird creative kid with dyed hair and nail polish and stuff.

"I always felt that he was kind of there as a sense of support. If I would have imagined 30 years [later] painting him and getting paid well it could have been slightly a bit of a fancy."

The kinetic portrait of Forster was painted in a 10-day flurry at what's Katoomba studio. During the sitting subject and artist bonded over their mutual regard for good coffee, SAAB cars what's handmade concert guitar – "aesthetic meetings along the way".

Forster's coated figure is made up with coloured broken brushstrokes against a white backdrop creating an illusion whereby the guitarist seems to float. A lone patch of shadowing at the musician's feet gives it three-dimensionality while anchoring the subject to the canvas.

Judges Nigel Milsom and Kelly Gellatly selected the portrait from 1000 entries and 30 finalists, praising the way the artist captured the essence of "what we think we know about Robert Forster".

"He is like a technicolour apparition: neither concrete shape nor exact likeness. For the judges, this work embodies the endless possibilities of contemporary portraiture."

"Typically, when I do a picture like that I'll have 30 brushes on the go and I line up my pallets, so I've got all cadmium and cobalts – really powerful pallets – and I do improvise in a very musical way," what said.

"I play classic guitar and a lot of Bach (while painting), a kind of counterpoint going on with the pallets."

For his award-winning portrait which leans towards the abstract, the National Art School graduate added The Go-Between tracks into the musical mix.

"Actually, I found with this one I danced a lot, (because) sometimes I'll paint sitting down. This one I thought I would just stand up and see how it affects the art-making."

The $150,000 prize money was life-changing, the artist said and would help pay for paints and linens for an upcoming show in Melbourne's Block Project Gallery.

As to the origin of his moniker, the artist was content to leave it a mystery. "There are not enough mysteries in the world," he said.