Queensland has re-elected One Nation leader Pauline Hanson to the Senate, the Australian Electoral Commission confirmed on Friday.

But the 68-year-old outspoken right-wing firebrand, who has been elected to a second consecutive six-year term, only just scraped in after almost four weeks of counting. 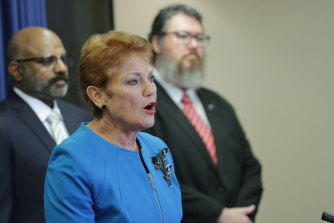 Hanson came fifth in the count, above Labor Senator Anthony Chisholm. The LNP’s Amanda Stoker was the only sitting Queensland senator not re-elected.

“I thank Queenslanders for entrusting me to continue to represent them in Canberra and I thank all those Australians who supported our party and lifted our national vote,” Hanson said.

While One Nation’s vote did increase, it was largely a result of the party fielding more candidates than the previous election.

“I’ve said int he past he probably wouldn’t make a good prime minister, however I sincerely hope he proves me wrong.”

Early counting had Hanson in a perilous position, with Legalise Cannabis Australia nipping at her heels for Queensland’s final Senate spot.

But, in the end, the One Nation leader prevailed, with the Australian Electoral Commission confirming her election late on Friday afternoon.

Queensland’s other five elected senators had been known for some time.

Labor senators Murray Watt and Chisholm were returned, as were the LNP’s James McGrath and Matt Canavan.

Hanson was easily elected in the double dissolution election of 2016, the third-placed in the field of 12 elected senators.

This year, however, Hanson struggled to separate herself from a crowded field of right-wing “freedom” candidates.

Australian Electoral Officer for Queensland Stephanie Attard said: “As with all aspects of the count, the automated distribution of preferences undertaken today was open to scrutineers appointed by the candidates.”

The AEC will formally declare the result in Brisbane on Monday.