Home » Lifestyle » Pocock has just arrived in the Senate, and already he is negotiating with the PM

Pocock has just arrived in the Senate, and already he is negotiating with the PM

He wouldn’t relish the comparison, but at the start of the Albanese government Senate crossbencher David Pocock finds himself with the sort of pivotal power independent Brian Harradine enjoyed during the early Howard years.

Harradine, together with another crossbencher, enabled the passage of key measures, including the partial sale of Telstra. But he also could say “no” – most notably to the GST, forcing the government into negotiations with the Australian Democrats and a fairly messy compromise. 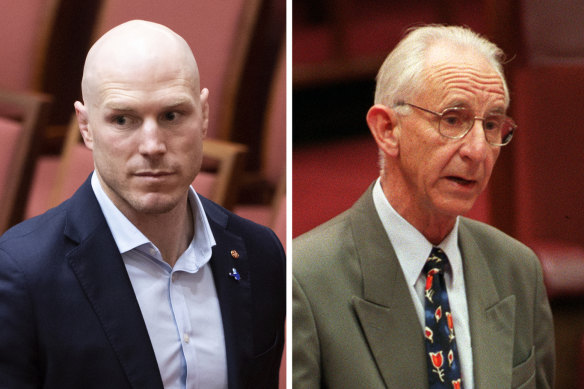 David Pocock (left) has emerged as a crossbench powerbroker in the Senate, like Brian Harradine (right) before him.

A highly polarising figure, the Tasmanian senator was a former Labor man, for whom Gough Whitlam once spectacularly put his leadership on the line in a bitter party brawl. He was eventually expelled by the ALP, before he ran for the Senate in 1975.

Harradine was a deeply committed, conservative Catholic and used his political power to pursue his faith, especially his opposition to abortion. On issues affecting the everyday lives of working families, he reflected his Labor roots.

Some aspects of our democratic system seem less than democratic, although viewed from another angle they augment democracy. Senate crossbenchers can be in a position to frustrate a government. They can also improve that government’s legislation. Or perhaps worsen it. It all depends where you’re coming from on an issue.

In the last parliament, the Morrison government often had to herd upper house crossbenchers. In this parliament, when the Coalition contests legislation, mostly it will be a matter of Labor herding Pocock. The government needs only one extra vote beyond the Greens, who’ll usually have nowhere else to turn.

With a national name as a former Wallabies captain, Pocock is the government’s natural go-to man, a progressive with a strong tinge of “teal”. He made history by winning his ACT seat from the Liberals, but he’s closer to Labor in his views.

But he’s not a pushover. With power comes pain; hard judgments inevitably alienate some voters. Pocock has been inundated with representations for and against the IR bill, the contentious part of which extends multi-employer bargaining.

He has local small businesses worried about a new law to strengthen employees’ clout to pursue wage rises. On the other hand, the ACT is a public sector town, with a powerful union presence.

Pocock has undertaken community consultations. But, in the end, he has to make his calls.

He’s wanted the omnibus bill split, to delay the day of reckoning. The government has refused. With intense haggling over the fine print, Pocock has been time-poor, repeatedly complaining about the rush. Two Fridays have been added to the fortnight Senate sitting to help with its general workload.

He’s been agonising about the threshold for a “small business”, set in the bill at fewer than 15 employees. He wants the number increased, and a Senate inquiry report, tabled this week, has suggested a marginal change to fewer than 20.

Pocock doesn’t want a union having a veto on whether a proposed agreement is put to a vote. He also favours an inquiry into how the legislation is operating. The Senate committee recommends such an inquiry be “no earlier than three years” after the law takes effect, conveniently post the next election.

The government will agree to an inquiry, make a modest change in the small-business definition, and give some other ground. Anthony Albanese is talking directly to Pocock.

Pocock is willing to use his power to advance the specific interests of his voters, although the extent to which he might become a “transactional” politician in the months ahead is unclear.

Certainly, he won’t match Harradine, who was shameless. People used to joke about the extraordinary largesse he extracted for Tasmania, especially to improve its communications. Anyway, the wealthy ACT is no Tasmania.

Pocock did recently float the idea of having the ACT’s housing debt wiped out. Lambie had set a precedent by doing a housing deal with the Coalition in negotiations on legislation. Finance Minister Katy Gallagher, also an ACT senator, quickly declared: “I’m not finance minister for the ACT … I’m finance minister for the country, and I don’t think it’s right to waive debts for the price of a vote on the Senate floor, which is how it’s happened in the past.”

Pocock later stepped back, saying he wouldn’t cross-trade on the IR bill. He might, however, get some concession on housing prior to the election.

Pocock is making sure one local measure is delivered before the parliament rises – the territory’s right to legislate for voluntary assisted dying. Parliaments in all states now have such laws; the ACT and the Northern Territory have been legally unable to address the issue.

Labor was committed to early action on territory rights. But Pocock’s importance guarantees that – regardless of the Senate’s time constraints – the bill (already through the lower house) will be put to a (free) vote this sitting. The Senate considered it on Thursday, however a vote was delayed until next Thursday. A frustrated Pocock tweeted, “Let’s just get this done, please.”

It will be done. Pocock will have made good on a constituency issue that’s also a moral issue. It’s one victory that, of course, would have appalled Harradine.

Apart from the matters of detail, Pocock has confronted another question with the IR bill. Would it be an overuse of his power to hold up this major legislation into the new year?

Labor claims the bill’s speedy passage is needed as part of getting wages moving. Business critics say haste is unwise on changes with wide ramifications, now also in the context of Reserve Bank Governor Phil Lowe’s warning this week about inflationary wage rises.

If he were alive today, Harradine would differ with Pocock on most issues. But what advice would he have for the ACT senator on this bill, where they might share a good deal of common ground?

In Lazarus Rising, John Howard wrote that Harradine “remained at heart a real Labor man when it came to industrial relations”. Quite likely he’d say bluntly, extract your deal and then let the government get on with it.