Politicians ignore concerns of the young at nation’s peril

Albanese fell back on his affordable-housing plans, which as Crowe pointed out to him are not aimed specifically at the young. Morrison talked about getting young people into work, but did not acknowledge wage stagnation or the insecure nature of many of the jobs we ask young people to do. 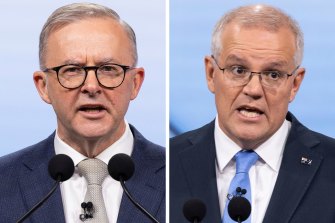 At the launch of this election campaign, we urged the major parties to put the young at the centre of their policy platforms. That would mean addressing conditions for those entering the jobs market; the way in which our tax system leans hard on income (which is where young people get their money) and touches lightly on accumulated assets (where older people park theirs); the increasing costs of buying or renting a property; and overarching all these concerns, the understanding that there are no jobs on a dead planet – that we are failing the test of environmental stewardship crucial to our long-term prosperity.

Perhaps it shouldn’t surprise us that this hasn’t happened. Labor would doubtless point to its experience at the 2019 election, when Bill Shorten’s vow to address the “dud deal” people under 40 were getting seemed to backfire at the ballot box. But pollsters might say it is a matter of simple arithmetic: people aged 55 and over make up 40 per cent of those enrolled to vote in this election. Twenty-five per cent of voters are aged 18 to 34.

The benefits of pitching to older voters seem plain. But there are risks. Last week Melbourne hosted an annual meeting of actuaries – people who make a living assessing risk – at which Ian Macfarlane, governor of the Reserve Bank under John Howard, warned that intergenerational inequality was getting worse. Not only did this prevent growth in consumption, but it raised the question of who would pay the welfare bill for the growing cohort of elderly Australians. “I’m surprised that the younger generation aren’t actually squealing louder,” he said.

Perhaps the lack of progress on the issues that matter to them will result in younger voters turning to independents or minor parties. Support among the young for the Coalition has slumped to a new low. The question, as David Crowe noted earlier this year, is whether and when their potential to affect the nation’s politics can be harnessed.

In a recent survey of younger voters, our reporter Rachael Dexter spoke to Think Forward, a youth think tank, whose co-founder Megan Shellie put the problem starkly: “The tax system was set up at a time when we didn’t have five generations living at once. As our country is ageing, we’re relying on a tax pool that’s shrinking – at the same time as reliance on the NDIS and aged care is growing.”

Think Forward has lobbied for an intergenerational fairness inquiry, similar to one set up in Britain a few years ago. But inquiries provide no inherent guarantee of profound systemic change, as we found with the banking royal commission led by Kenneth Hayne. What is really required is political movement – either within one of the major parties or across a broader coalition of MPs – to put the young back at the heart of our political vision. The alternative, as Grattan Institute chief executive Danielle Wood put it, is an Australia “where who your parents are will have a greater impact on your life than your own talents and hard work” – the very antithesis of the “fair go” all our politicians would say they champion.

Gay Alcorn sends a newsletter to subscribers each week. Sign up to receive her Note from the Editor.