The nation’s economy is going to shrink over the September quarter leaving more workers unemployed, Prime Minister Scott Morrison warning the damage from lockdowns will be significant but followed by a sharp recovery before Christmas.

Mr Morrison on Wednesday said the lockdowns in Victoria, NSW and South Australia will weigh heavily on the economy and employment in the three months to September. But he is confident of a rebound by the December quarter avoiding a technical recession, defined as two quarters of negative GDP growth. 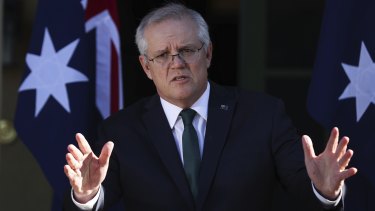 Prime Minister Scott Morrison has warned of a heavy blow to the economy from the latest lockdowns.Credit:Alex Ellinghausen

“The economic impact of this, of course, will be a heavy blow,” Mr Morrison said. “But it’s not a blow we can’t recover from and how do I know that? Because last year when we faced the same heavy blow, we turned it around and got a million people back into work.”

A coalition of Australia’s largest business groups has now told the government they should have more power to cut staff hours, change their duties and move them to different areas such as employees’ homes to get through the downturn.

Employers were handed those powers along with JobKeeper last year but they have not been reintroduced.

At its peak, JobKeeper was worth $1500 a fortnight whereas the coronavirus disaster payment that has been available in Sydney and Melbourne is up to $1200.

The coronavirus disaster payment is not paid through employers and does not come with any requirement for firms not to sack staff. Unions want that guarantee built into industrial laws for firms that take government coronavirus support.

“The Morrison government has a responsibility to working Australians to not cave to these demands from businesses, and instead to reinstate a revised JobKeeper two system that we know will work to protect jobs and support public safety,” said Australian Council of Trade Unions president Michele O’Neil.

Through the first half of 2020, the economy suffered its deepest contraction since the Great Depression due to lockdowns across the country. Since then it has rebounded strongly while unemployment has fallen to a 10-year low of 4.9 per cent.

But there are already signs the most recent lockdowns will hit the economy.

Preliminary retail figures for June from the Australian Bureau of Statistics showed a 1.8 per cent drop, the biggest fall this year.

Victoria, which emerged from lockdown late in the month, showed a 3.5 per cent fall in retail sales while there was a 2 per cent drop in NSW. Queensland, which faced its own restrictions, had a 1.5 per cent fall.

This data precedes the lockdowns now affecting more than half of the country.

Mr Morrison said he had spoken to Reserve Bank governor Philip Lowe and they are aligned on the outlook that the impacts of the lockdowns will mainly affect the current September quarter.

“In the quarter that follows, should we continue to be on the path we’re on in increasing our resilience, then we can expect that to turnaround in the December quarter,” he said.

“The sights will open again and the economy will come back to life very, very quickly.”

CommSec senior economist Ryan Felsman said the country now faces a move from a “V-shaped” recovery, where a sharp contraction is followed by a quick rebound, to a “W-shaped” recovery with multiple sharp downturns and subsequent improvements.

Commonwealth Bank, Westpac and AMP economists expect GDP to contract 0.7 per cent over the September quarter and for unemployment to lift. The total cost of the Victorian, South Australian and NSW lockdowns so far are expected to be at a cost of about $12 billion. The majority of economists expect a fast rebound before Christmas provided the lockdowns are not extended.

“With lockdowns extending in Sydney and Victoria alongside mobility curbs in South Australia, it’ll be interesting to observe whether businesses see the latest outbreaks as being transitory – preferring to retain workers by cutting hours rather than jobs,” Mr Felsman said.

Stay across the most crucial developments related to the pandemic with the Coronavirus Update. Sign up to receive the weekly newsletter.