Psychiatrist and former Australian of the Year Patrick McGorry has backed calls for the federal government to extend access to Medicare rebates for telehealth support for mental health.

More than 1 million psychologist and psychiatrist sessions have been held over the telephone or by video conferencing during the COVID-19 pandemic, but the Medicare item numbers that allow patients to claim a rebate for the service will end on September 30. 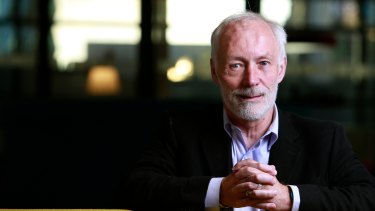 Professor Patrick McGorry said telehealth for psychology and psychiatry was a good option for people unable to travel to appointments and “it would be terrible to take it away”.Credit:Eddie Jim

Health Minister Greg Hunt has signalled a desire for telehealth to remain a feature of the nation’s post-pandemic healthcare system, but has not decided whether mental health services will remain on the list of those allowed to be delivered via phone or video conferencing.

Professor McGorry said telehealth for psychology and psychiatry was a good option for people unable to travel to appointments and "it would be terrible to take it away".

"It doesn't replace face-to-face but it's been great to have it as a safety net so you can keep people engaged, keep seeing people," he said. "And it does actually suit some people better [such as those in] rural and regional [areas] or people who can't get in to appointments."

The Australian Bureau of Statistics' household impacts of COVID survey, conducted in mid-August and published on Monday, found more than two-fifths of Australians reported feeling nervous (46 per cent), restless or fidgety (41 per cent) and that everything was an effort (41 per cent) in the previous four weeks.

Official data released by the federal Health Department shows 1.3 million, or 44 per cent, of the 3 million mental health consultations funded through Medicare in April, May and June were delivered through telehealth.

Steve Michelson, a spokesman for advocacy group Australians for Mental Health, said telehealth psychology sessions were playing a critical role in supporting those experiencing mental ill-health during the pandemic.

"It's a really challenging time for people," Ms Carrison said. "A month away [from the rebates ending], people need to make sure that they're planning in their sessions and know that they're going to have ongoing care."

She said even once the COVID-19 pandemic was under control, telehealth was an important option for people seeking mental health support.

Ms Carrison said while it was ideal for telehealth to be used with patients who already had a therapeutic relationship with their therapist, "it's not essential".

"There have been lost of people throughout this period that have sought help for the first time," Ms Carrison said.

Labor's health spokesman, Chris Bowen, called on Mr Hunt to extend telehealth for mental health beyond September 30 "as a priority".

"Labor also calls on the government to extend the Medicare-funded sessions available under mental health treatment plans from 10 to 20 across Australia," Mr Bowen said.

The government has given Victorian residents access to an additional 10 Medicare-funded psychology sessions, but not other states.

A spokesman for Mr Hunt said the minister was working with the medical community on details of what care would be funded through telehealth in future.

"The Australian government has made telehealth a key pillar in the fight against COVID-19," the spokesman said. "That work is now under way … to build on this once-in-a-generation opportunity to modernise our health system, including an ongoing role for telehealth."