Abortion provider MSI Australia is lobbying for new Medicare items to enable it to end out-of-pocket costs, as the federal government vows to improve access to reproductive services.

MSI managing director Jamal Hakim said access to abortion was “a postcode lottery” and called for a review of Medicare item numbers and a national abortion access taskforce.

“One of the barriers for GPs to prescribe two-step medical abortion drugs is because there’s a lot of work that needs to go into post-care and pre-care,” Hakim said. 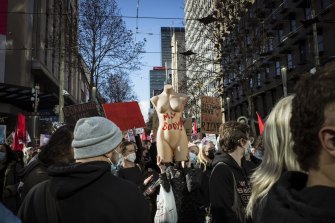 “There are no Medicare item numbers for medical abortion at the moment.”

But Monash University chair of general practice Professor Danielle Mazza, a leader in women’s health, said broader reform was needed to close the gaps – including better training for GPs – and that terminations must be available in public hospitals.

“In the UK, abortion is free. It’s provided by the NHS,” she said.

“Where the hospitals don’t provide it, then services are commissioned in a local region and provided and there is no cost.”

Gallagher met her state counterparts in Adelaide on Friday to discuss women’s safety and all ministers agreed to work towards equal access to abortion across all states and territories through the National Women’s Health Strategy 2020-30, released by the former Coalition government in 2019.

Assistant Health Minister Ged Kearney, who has been tasked with steering the federal government’s work towards the strategy, said she recognised that “many Australian women are concerned about access to termination … in light of Roe v Wade”.

“Access to affordable termination is a crucial part of healthcare for women,” Kearney, a former nurse and Australian Council of Trade Unions president, said.

“The Health Minister, Mark Butler, and I will be working, alongside state and territory governments who regulate terminations and provide key health services, to make sure that women can access terminations when they need them.”

People seeking an abortion through MSI (formerly Marie Stopes International) face out-of-pocket costs of about $350 for a medical termination, which involves a course of two pills sent in the mail after a telehealth consultation held up to nine weeks’ gestation.

The two-step medical abortion pills containing mifepristone and misoprostol (known as RU486) cost just $42.50 on the Pharmaceutical Benefits Scheme, but the service includes wrap-around support from social workers, nurses and aftercare – including follow-up surgery if there are complications – which Medicare does not fully cover.

The fee for a surgical abortion starts at $620 and can be as high as $8000 for those without a Medicare card or in cases of late-stage pregnancy.

Mazza said creating new Medicare item numbers would not fix the problem and that the federal government should set national standards for abortion and work with states and territories to ensure medical and surgical terminations were accessible through hospitals and primary health networks.

MSI Australia operates 10 clinics that provide tens of thousands of medical and surgical abortions each year.