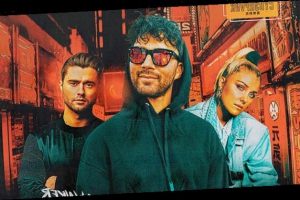 The future is here, and it’s ‘More Than Ok’ — it’s incredible! R3H4B teams up with Clara Mae and Frank Walker for a new high-octane video, and she shares EXCLUSIVELY with us how she managed to pull that crazy underwater scene.

Oh, you know that the new video from R3H4B, Clara Mae, and Frank Walker is “More Than OK.” The dance-pop banger, written by Clara and Smith & Thell, gets transformed into a Blade Runner­-eqsue adventure courtesy of director Mario Gonsalves. In the video, released on Jan. 24, Clara fights through the emotions of a failing relationship (“We shared the same friends and apartment, but lately we don’t talk / Only about other’s problems but never mention ours”) while racing aboard an ATV, screaming at a broken mirror, and even struggling to breathe while underwater. “It’s always a crazy and wonderful feeling to see the words you’ve been a part of writing come to life through pictures and video,” Clara tells HollywoodLife EXCLUSIVELY. “I think the director Mario had a great twist and loved that he used a lot of metaphors in the video.”

“More Than OK” is a fantastic visual representation of the turmoil and distress that comes when realizing it’s not going to get any better. Perhaps the most captivating scenes in the video are those of Clara when she’s completely submerged, but as she tells HollywoodLife, shooting them was harder than it looks. “I was asked if I was comfortable underwater and for how long I could hold my breath. I responded with confidence that I’m used to being underwater and that I could easily hold my breath for 40 seconds.”

“So, there we were in the pool, surrounded by approximately 40 people; it was this huge production to film the underwater scenes, and then Mario called out ‘action,” she tells HollywoodLife. “I was supposed to just lean back and sink in the water, [but] what I thought was 40 seconds turned out to be only 1 second. I came up and looked at my manager and realized this was much harder than I thought. It took a while until I nailed it, and it was definitely one of the toughest challenges I’ve done.”

Clara’s hard work paid off, as “More Than Ok” is an eye-catching visual that perfectly matches the expert production from R3H4B and Frank Walker. After R3HAB (born Fadil El Ghoul) teamed up with Zayn to venture into the pop world with “Flames,” he returns to the dance floor with a collaboration that’s been a long time coming. “I’ve been a fan of Clara’s voice for quite a while,” he says in a statement, “and when I got the chance to work with her, I didn’t hesitate one minute. ‘More Than OK’ is a cool vibey song with great vocals, including a message everyone can relate to, and a perfect way to kick off the new decade.”

He’s not the only fan of Clara’s voice. She’s worked alongside acts like David Guetta, Tiesto, and Martin Jensen. She co-wrote and featured on KREAM’s “Taped Up Heart,” which has over 130 million streams and reached the top 25 on the Billboard’s Hot Dance/Electric Songs chart. She released her debut EP, Sorry For Writing All The Songs About You, in 2018, and her collab with Jake Miller “Better Me Better You” drew praise from the likes of Elvis Duran. Last year, she built on her success by putting out tracks “Lost,” “Loved you Once,” and “Unmiss You.” Now, with this new song and video, she’s ready to take 2020 by storm.