Party time! Racegoers head out on the town after the St Leger at Doncaster (but it’s all a bit too much for some as tempers boil over)

Racegoers have taken over the streets of Doncaster to celebrate following Hurricane Lane’s win at the Cazoo St Leger today.

Revellers let their hair down and partied on the street at the close of the competition’s fourth day, with women taking their shoes off after a day of looking glamourous at the races.

It was a little too much for some of the gentlemen and ladies who had spent the day cheering the racers on and enjoying a few drinks.

As one of the most prestigious events in the British horse racing calendar came to a close, several racegoers let the sweltering heat and free flowing alcohol go to their heads. 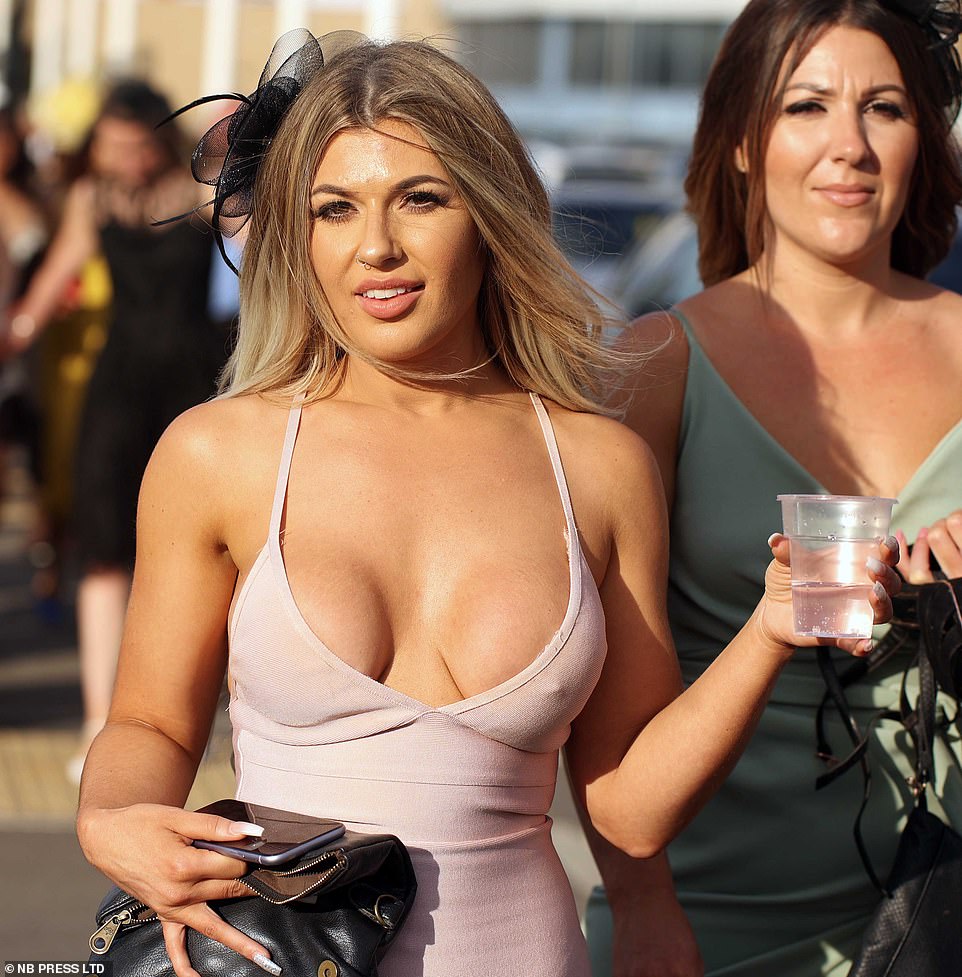 Police had to intervene and split a few flights that erupted around town, with men ruthlessly kicking each other after arguments escalated.

Meanwhile, ladies who had started the day looking great ended up worse for wear, trying to keep their dignities intact while walking the asphalt barefoot.

St Leger Stakes attracts some of the leading stables across the country to show in a roll of honour, including some of the most acclaimed horses in history.

Today it was Hurricane Lane, trained by Charlie Appleby and ridden by William Buick, the Irish Derby and Grand Prix de Paris winner who was sent off the 8-11 favourite on his step up to an extended mile and three-quarters on Town Moor. 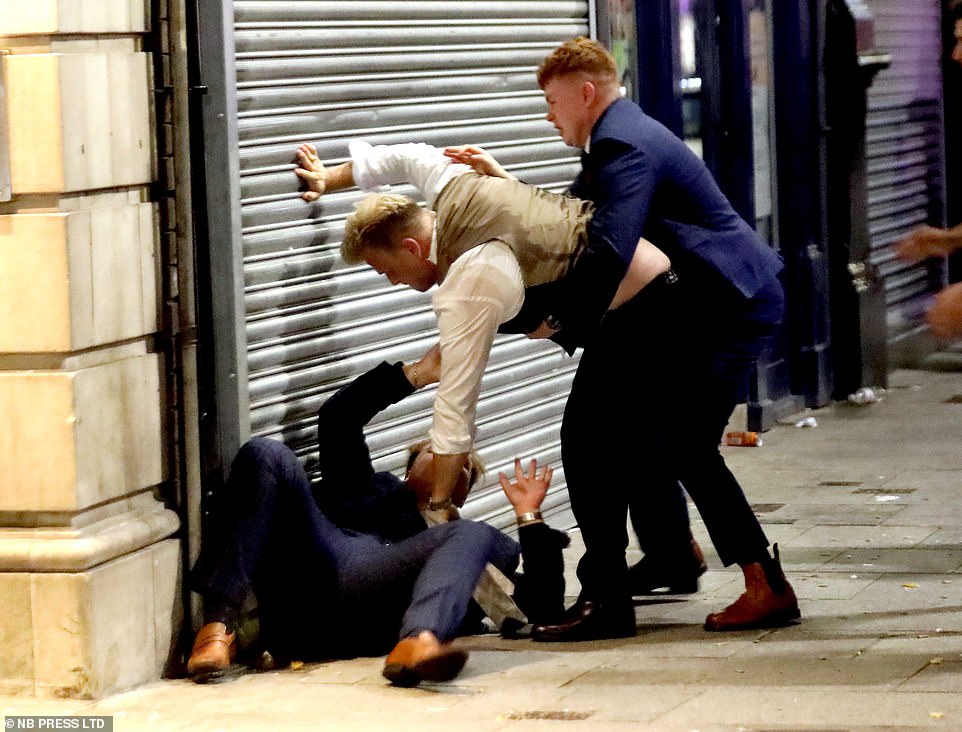 Celebrations took a turn for the violent after revellers were seen fighting on the street, with one man trying to keep his friend from going on with the fight 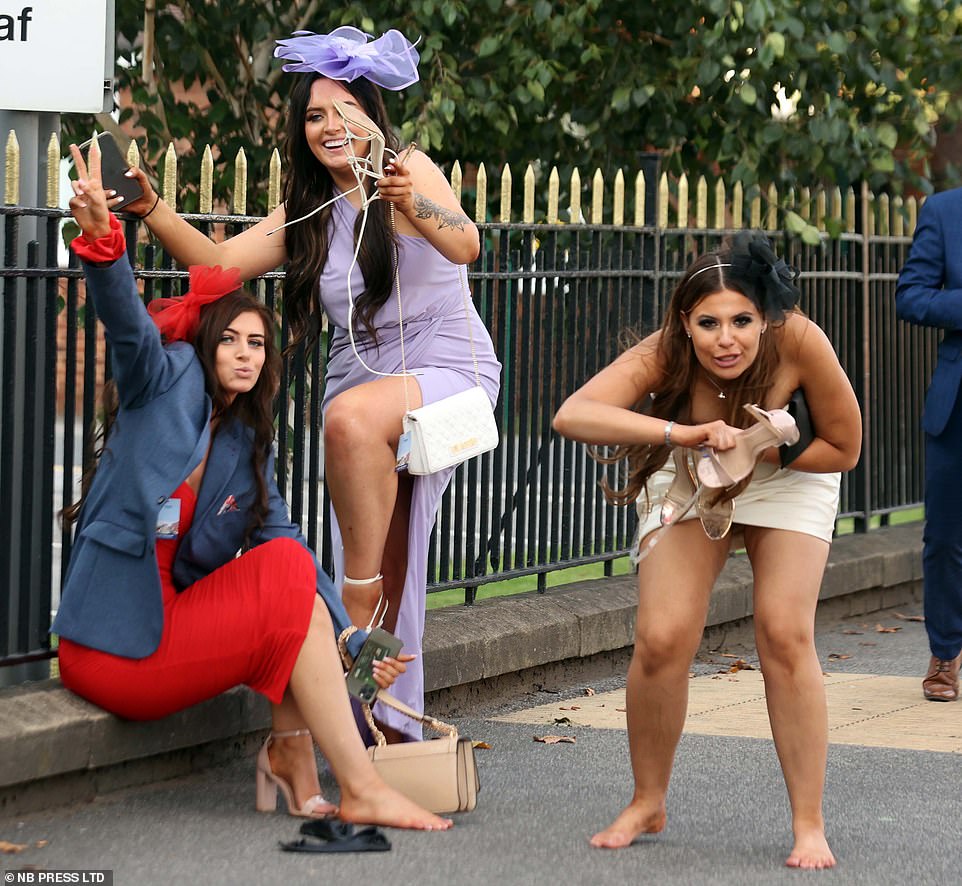 After a day of looking glamourous, the ladies of the race look off their shoes and let their hair down on the sidewalk, with some looking a bit worse for wear

Ridden with restraint through the early stages as Hollie Doyle and Interpretation set a fair gallop, Hurricane Lane was clearly travelling with ease at the top of the straight.

Mojo Star was the first to go for home, but Buick had the move covered and Hurricane Lane lengthened and soon grabbed the lead.

His change of gear proved decisive as he stretched clear in the final furlong to win by two and three-quarter lengths.

Mojo Star was second – as he was in the Derby when Hurricane Lane was third – with The Mediterranean third. 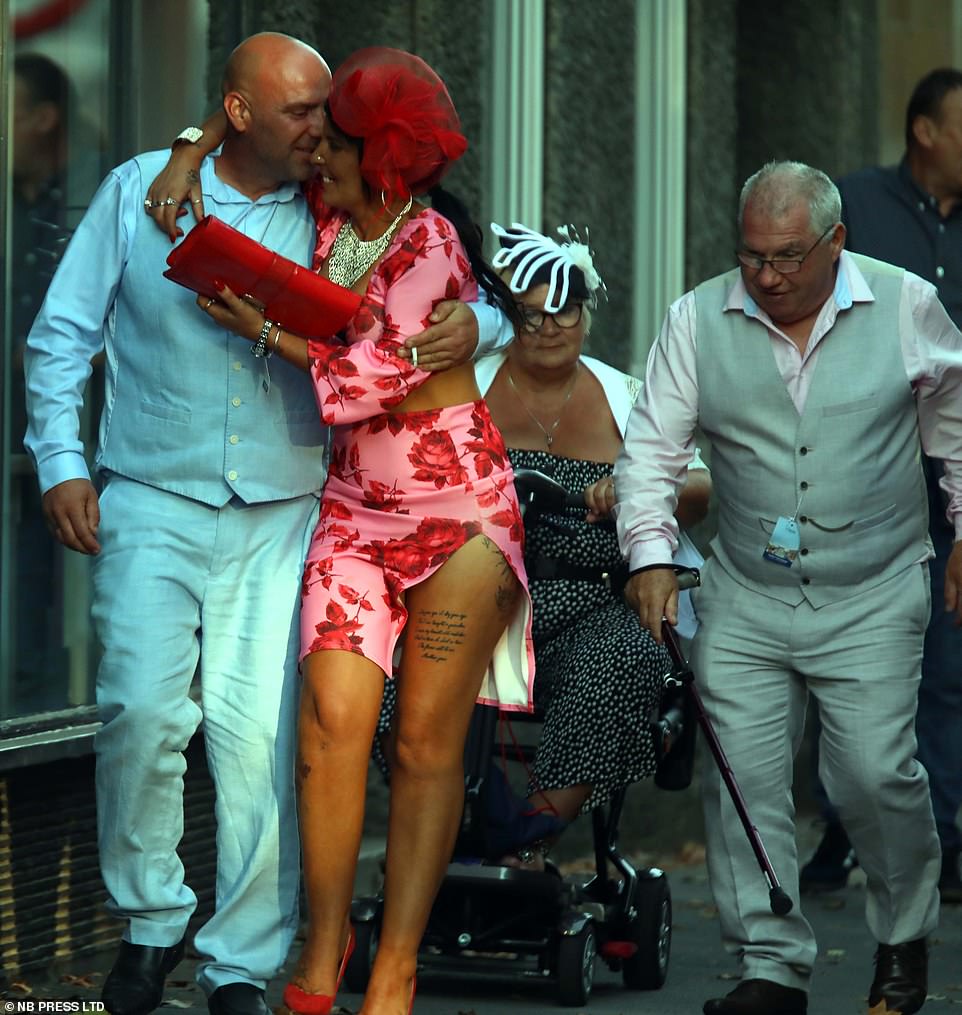 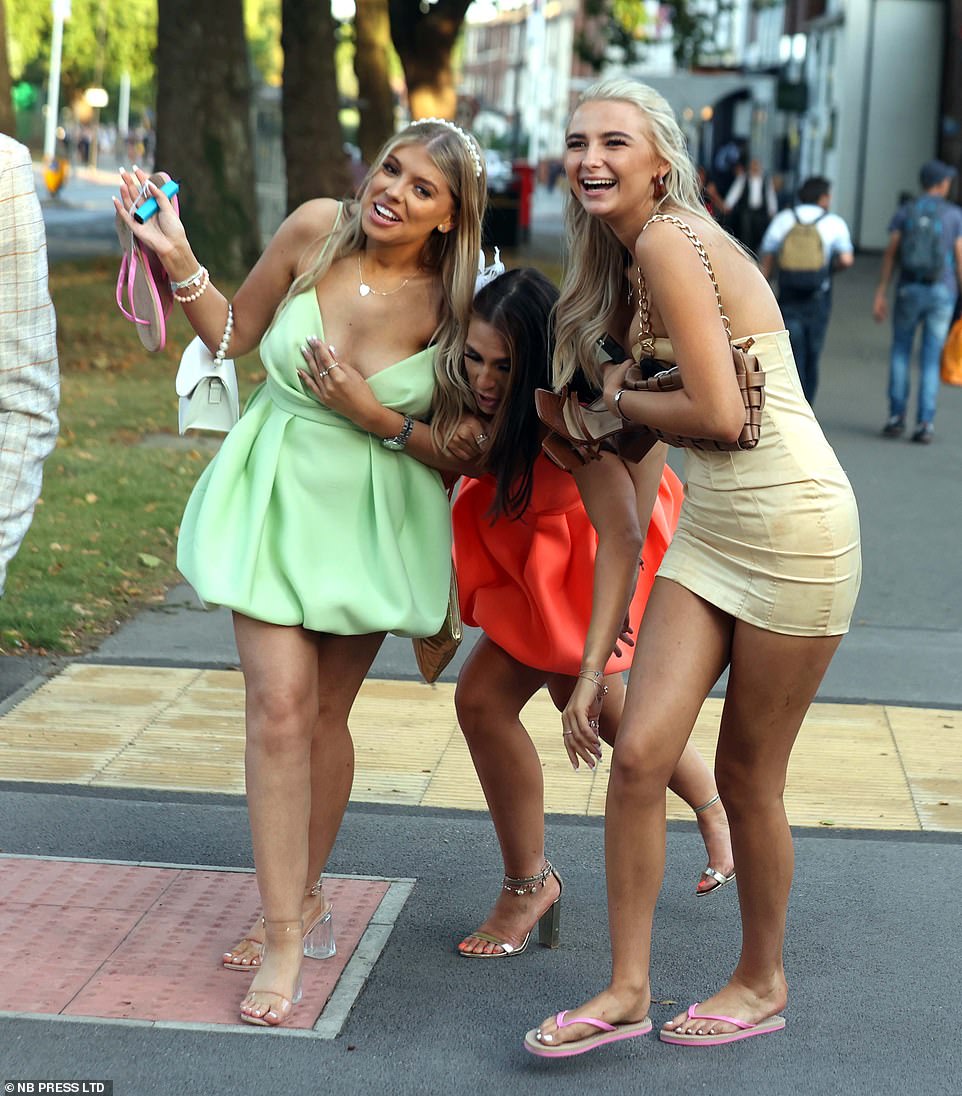 Revellers hid their modesty and posed for pictures after some swapped heels for flip-flops, but some seemed to struggle with gravity

Buick said: ‘He’s a jockey’s dream, he’s a lovely horse to ride – you can put him anywhere in the race and he relaxes which is obviously vital in a race over this distance.

‘What’s impressed me in his last two or three runs is that he quickens towards the end, he really did put the race to bed then. He’s a fantastic horse and I’m sure there’s more room for improvement.

‘We had a lot of confidence in him. He was giving all the right signs coming into the race.

‘It’s fantastic (to win the race). These horses, they need to be cherished while they’re around.’ 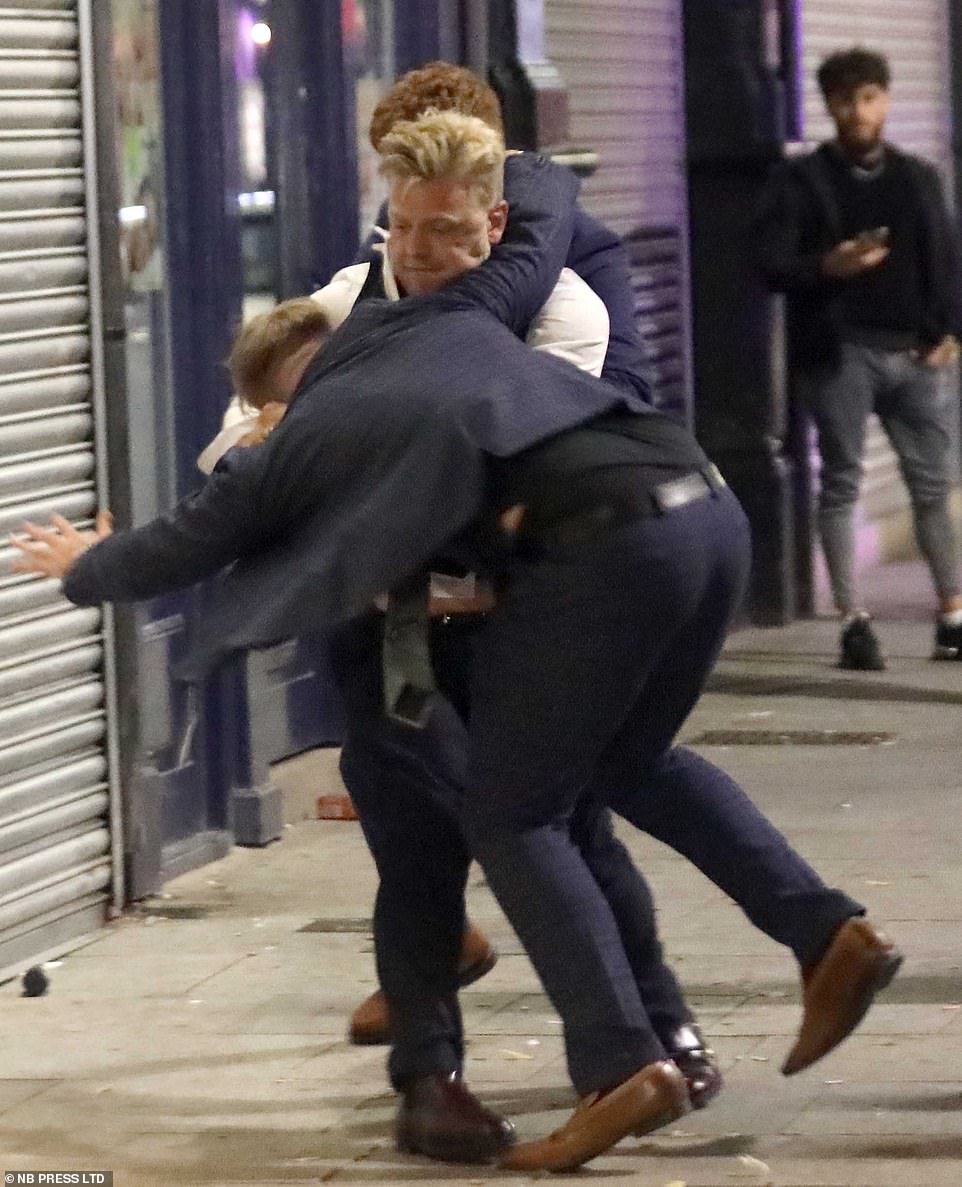 Three men were seen getting physical and nearly fall to the ground at the end of the night marked with much celebrating, pictured 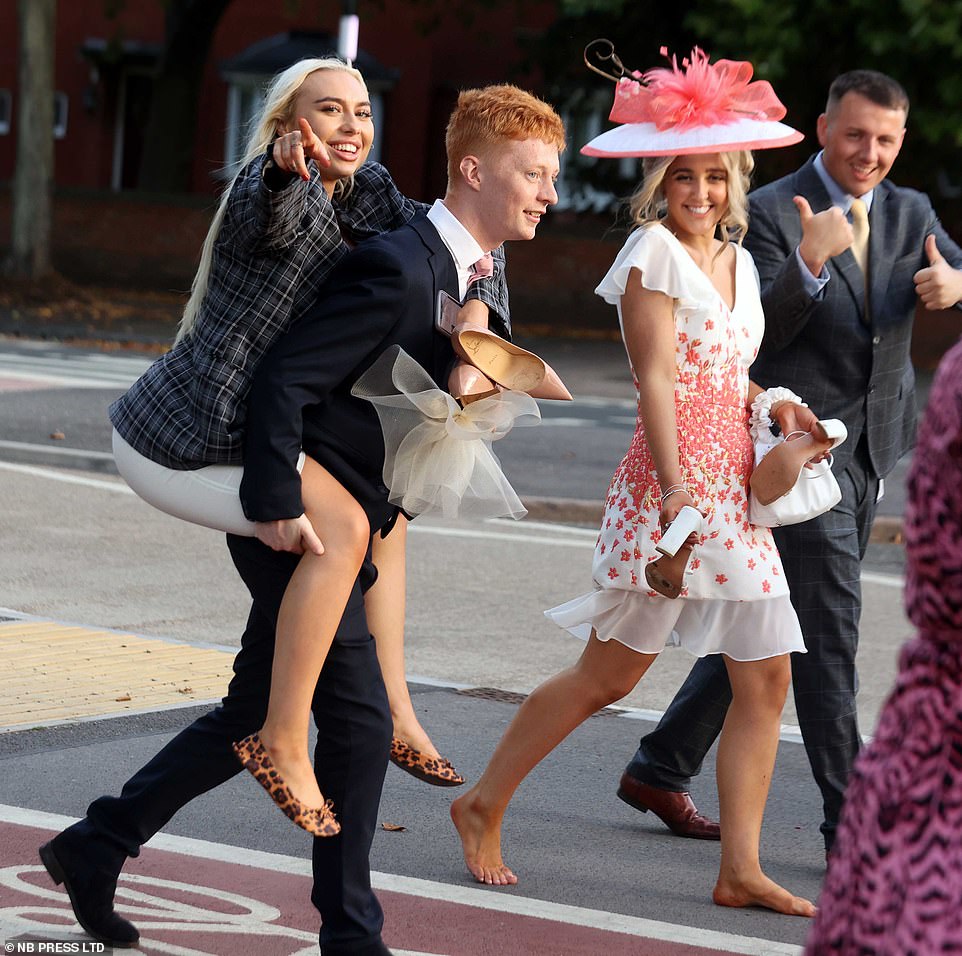 Who said chivalry was dead? A boyfriend kindly carried his lady, who had swapped heels for ballerina shoes, on his back after a long day of partying

Buick added: ‘We went just a steady gallop, not a mad gallop, nice and even, the field was compact.

‘It was very smooth, I was where I wanted to be throughout really.”

The rider could now face a tough choice if both Hurricane Lane and Derby hero Adayar both line up in next month’s Prix de l’Arc de Triomphe at Paris Longchamp.

Buick said: ‘Obviously one has just crossed the line so I won’t be rushing into a decision and we’ll have to see how he comes back first. 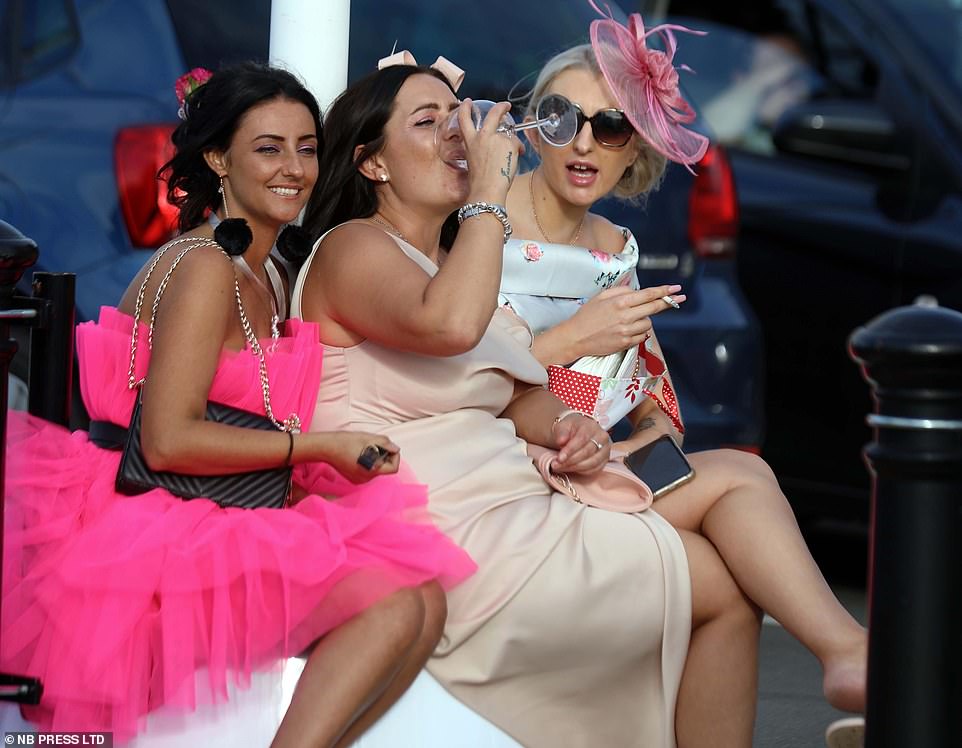 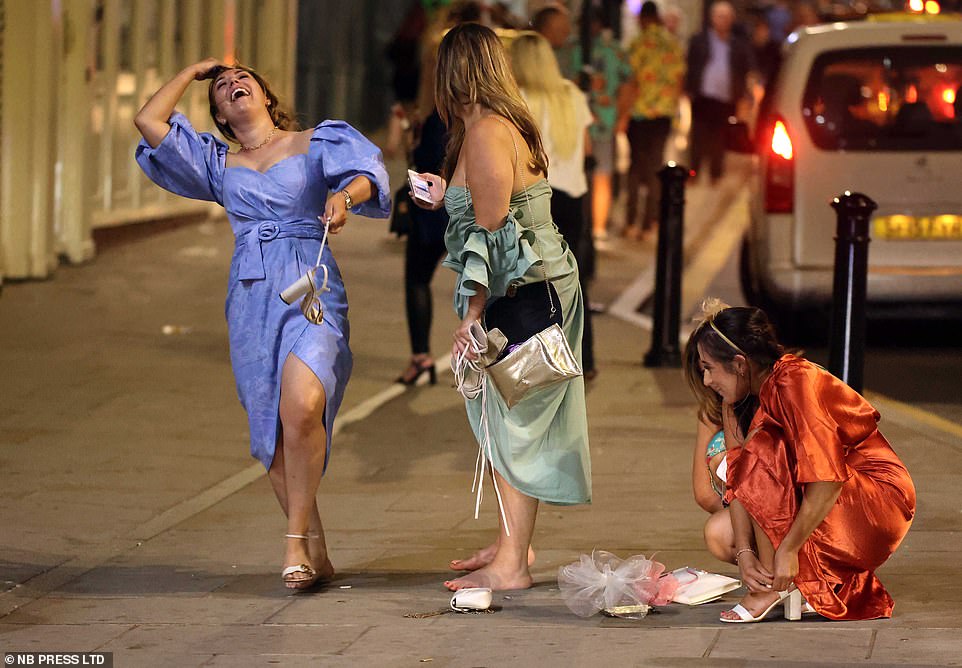 Horsing around! A lady could be seen laughing with friends while one of the fellow party goers did her shoe up as they hit the town 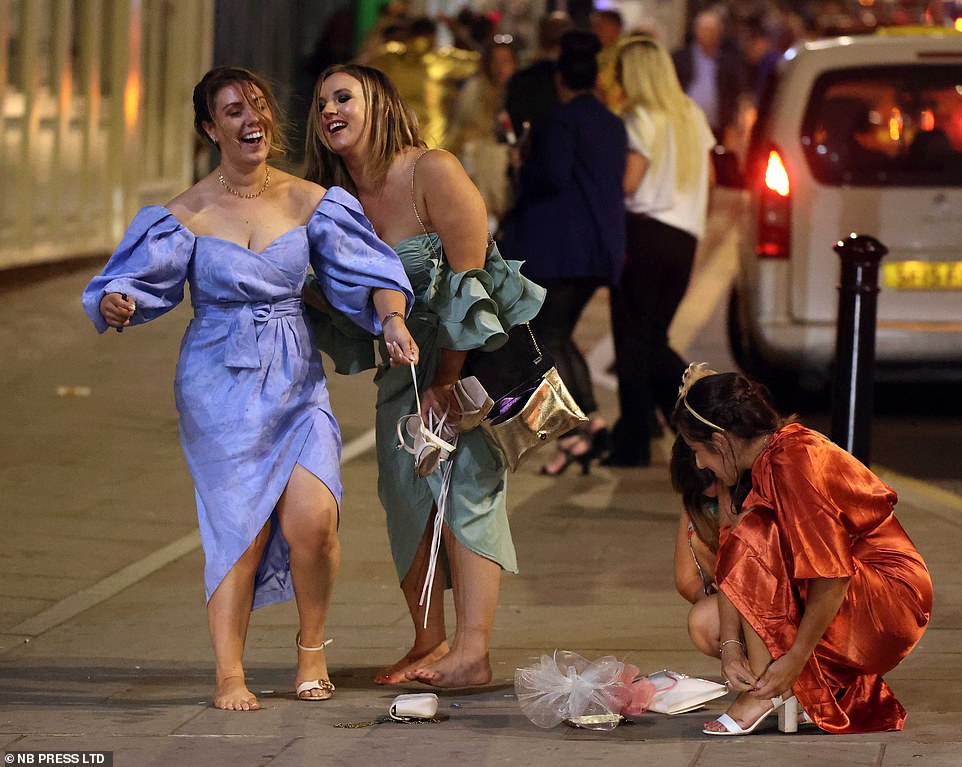 The shoes are off! After a long day staying on their toes, the three ladies decided they had enough and got rid of their painful footwear

‘This lad has only lost one race in his life and Adayar has won the Derby and King George.’

Appleby was delighted to win a first Leger, which is the oldest British Classic having first been run in 1776.

He said: ‘It was a fantastic performance. Congratulations to Sheikh Mohammed and Team Godolphin. It’s great to win any Classic but to win the final Classic, it’s historic, so it’s extra special. 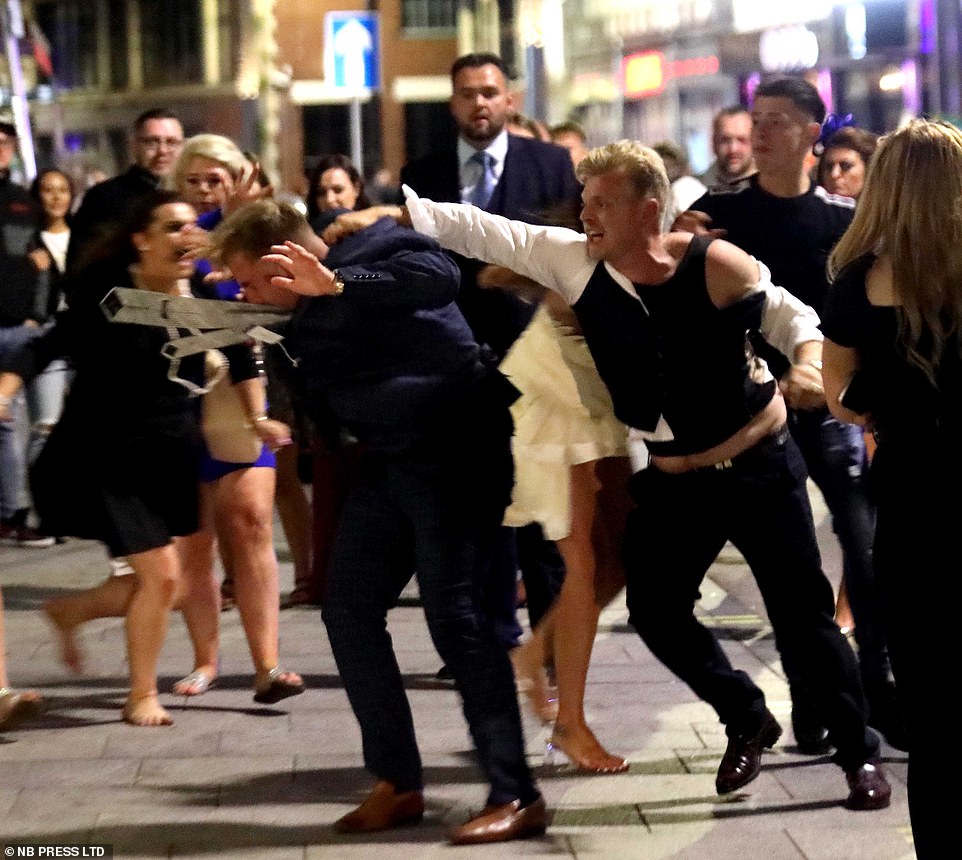 Two men entered an intense fight on the street, while passers-by rushed to try and separate the enemies before the brawl could develop 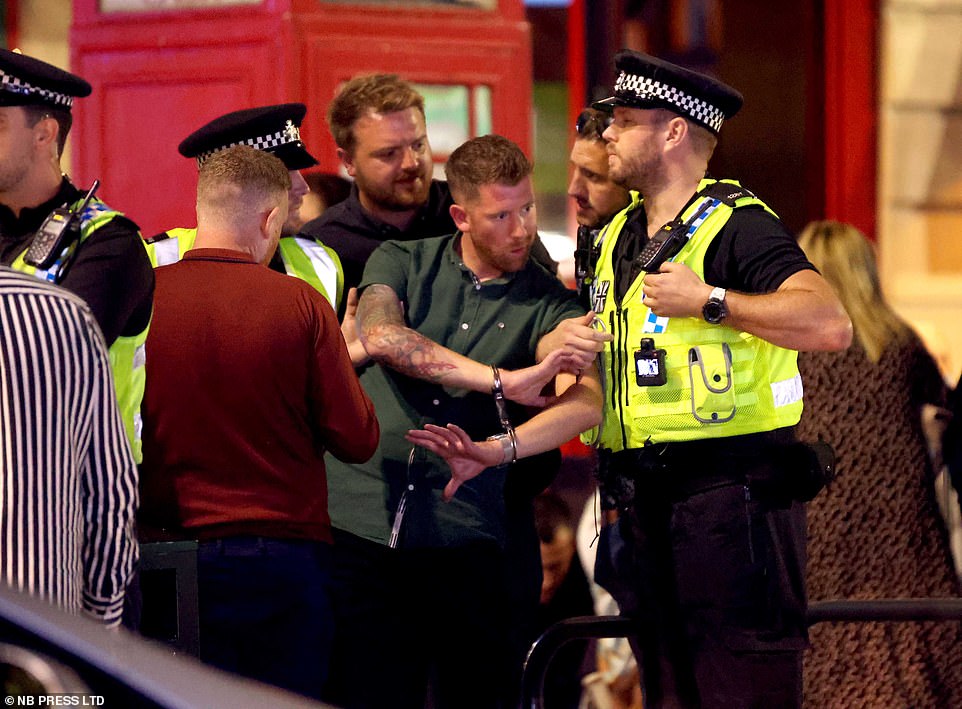 One reveller who had gone too far tried to argue with officers after they arrested him and put handcuffs on him, on their way to the station 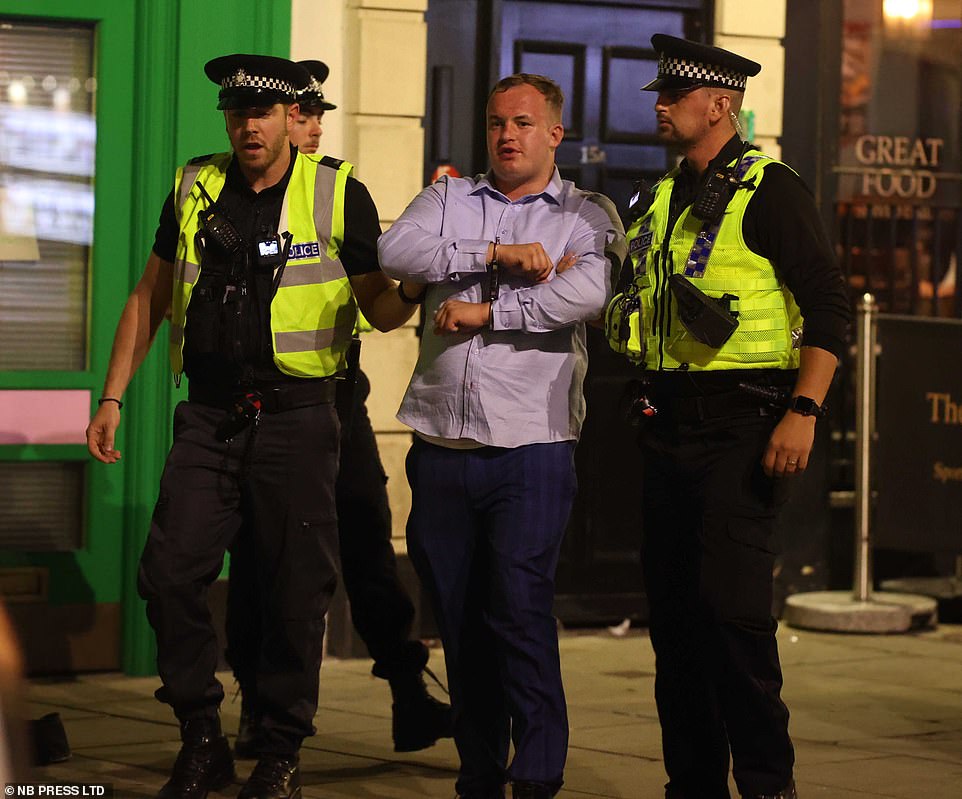 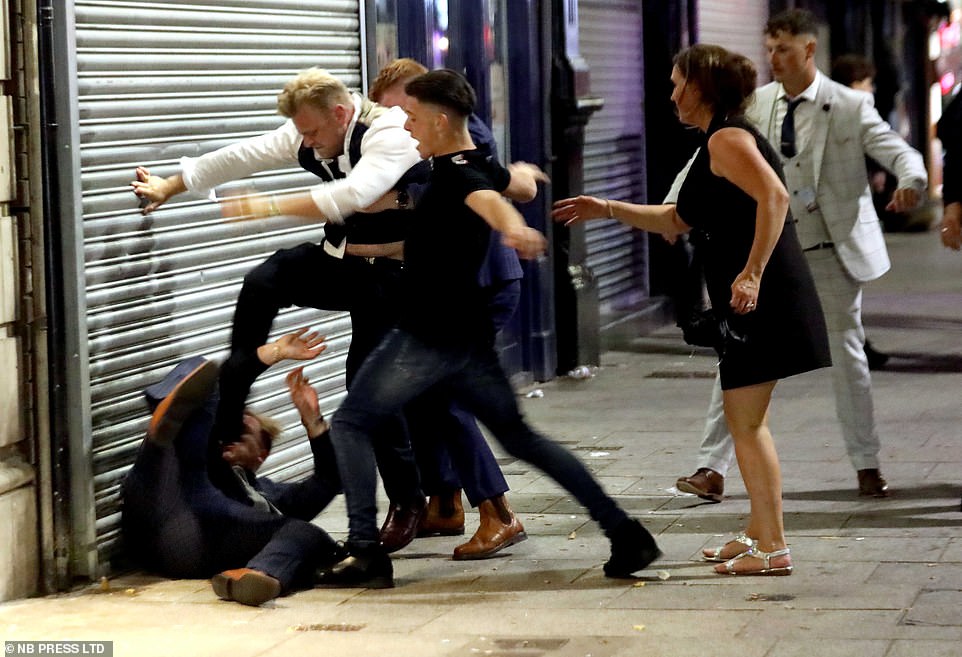 Passers-by had no choice but to run to the help of the man on the left after another man violently kicked him, while another tried to drag him away 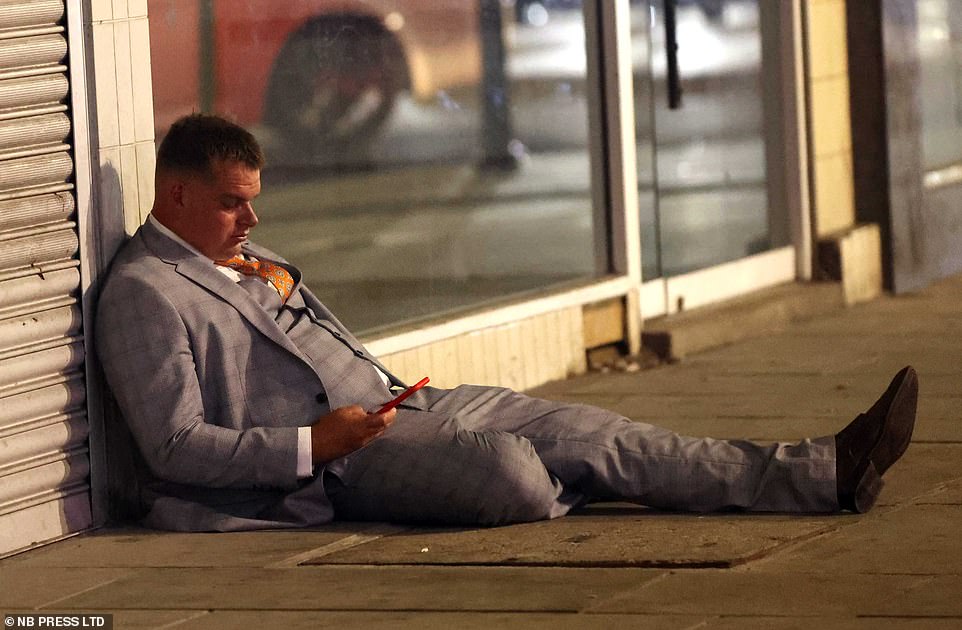 Time for bed! A reveller could be seen checking his phone, sitting on the floor, perhaps waiting for a ride to take him home, as the night of partying drew to a close 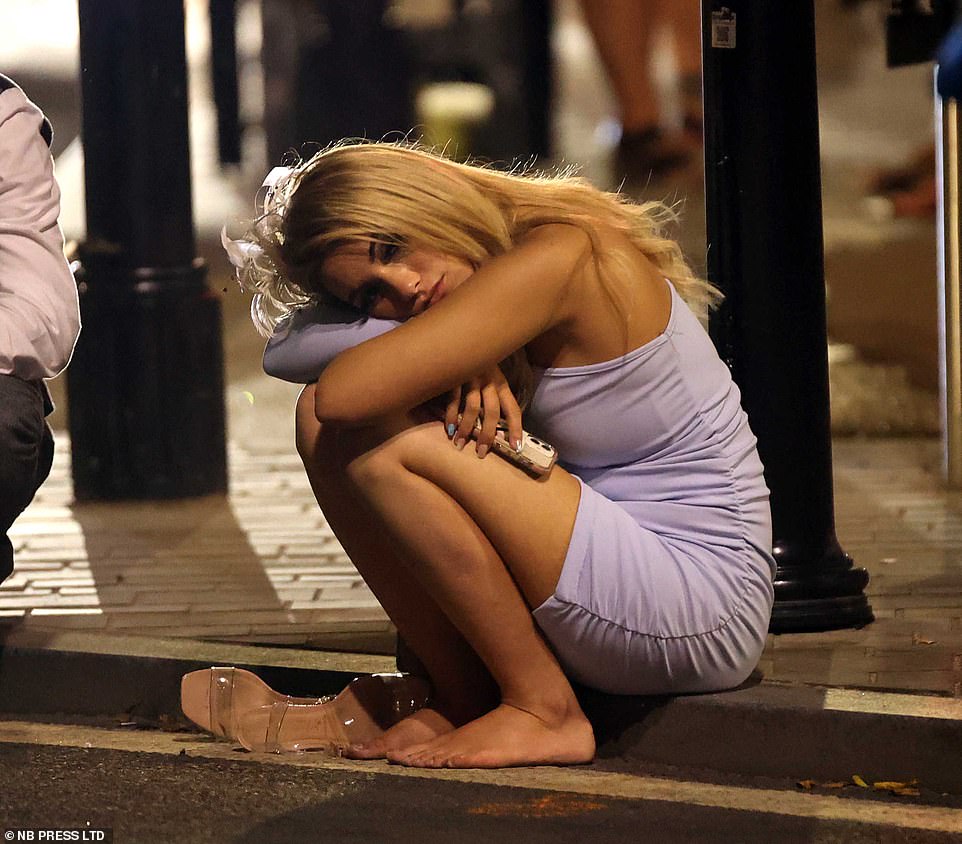 One lady down on her luck seemed to wish the evening to be over after having taken her shoes off and sitting on the sidewalk, pictured

‘William said it was a dream race. He had the perfect pitch and all the room he needed and the great thing about this horse is he quickens. He’s got a gear change. You couldn’t have been more comfortable watching it all the way round.

‘The ground isn’t key to him, but he is more comfortable under these conditions on the slower side. 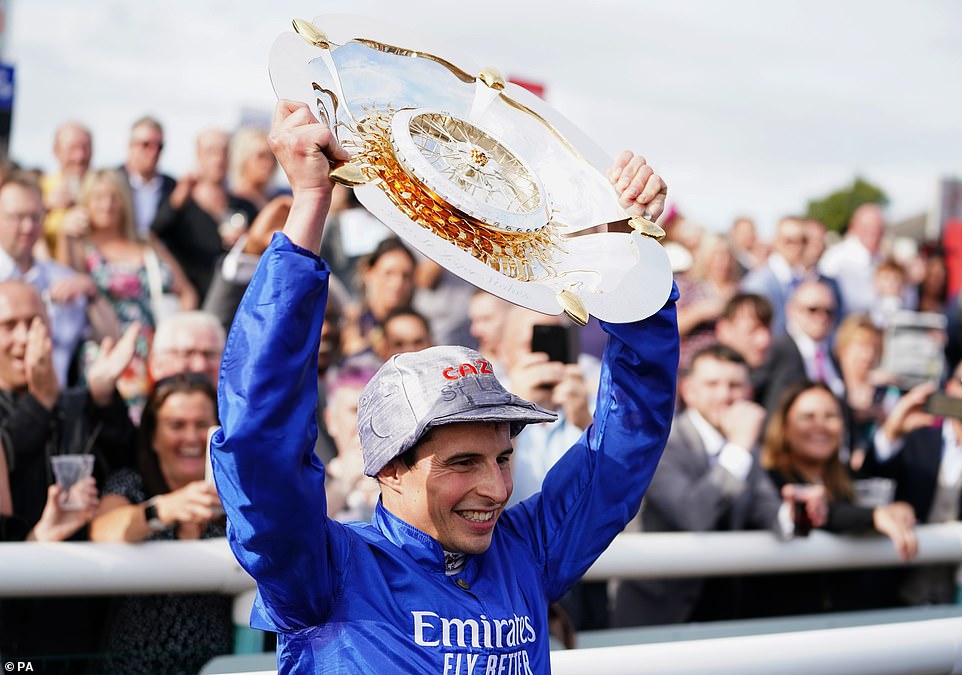