Fairytale come alive! Real-life Rapunzel poses as her namesake to flaunt her two metre-long mane that takes an hour to wash and needs to be combed twice a day

A ‘real-life’ Rapunzel has dressed up as her namesake in a magical photoshoot at a real castle – and she is the spitting image of the fictional character.

The 35-year-old, who has been growing her hair since she was just five has unsurprisingly been nicknamed Rapunzel for her impressive tresses.

Since then, she has amassed more than 70,000 followers on Instagram, posting photos of herself in fairytale-like settings wearing gorgeous gowns. 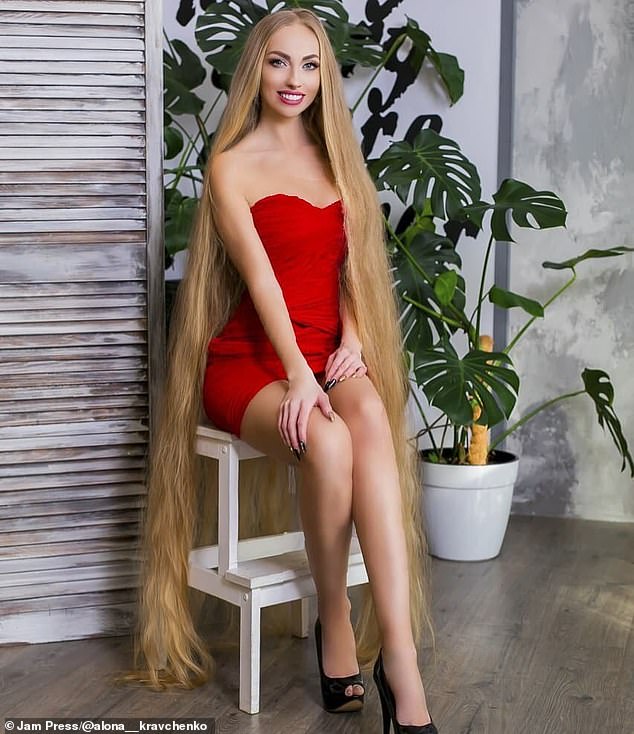 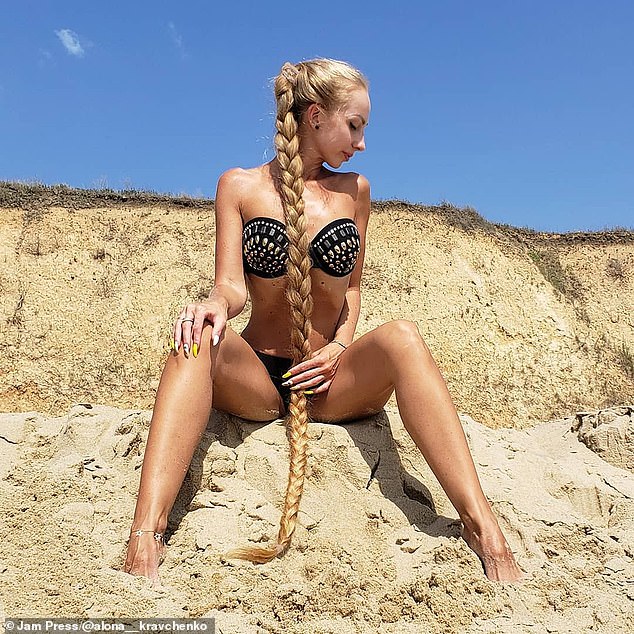 The 35-year-old has been growing her hair since she was five, and has unsurprisingly been  nicknamed Rapunzel for her impressive tresses

In one of her most recent posts, Alena decided to dress up as her favourite fictional character – and people have been left blown away by the results.

Embodying the role, the social media star – and hair goddess – wore a stunning purple dress, showing off her blonde hair with a pretty tiara on her head.

In one photo, she plays the piano in a grand hall looking like a true Disney princess.

Another shot shows Alena frolicking in the grass, while a different photo features her golden mane flying in the wind. 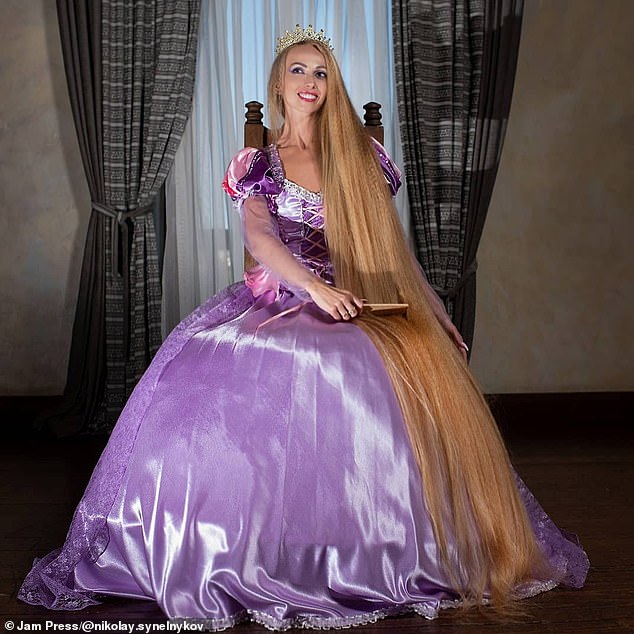 In one of her most recent Instagram posts, Alena decided to dress up as her favourite fictional character, Rapunzel 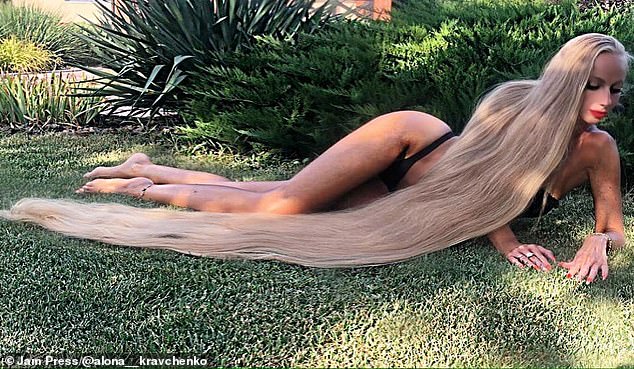 Alena said that from a young age, she has dreamed abotu starring in a film as Rapunzel after years of dedication to growing her hair, which she combs twice daily

After a change in outfit, the 35-year-old also posed in front of a castle, with her hair styled in a braid with flowers.

She also sat on the grass, holding up a photo of ‘Flynn Rider’, a starring character in Tangled, the computer-animated film based on the fairytale.

Alena even carried a frying pan – a funny nod to one of the scenes, where Rapunzel uses the kitchen item as a ‘weapon’ as she explores the world.

‘I love Rapunzel,’ Alena said. ‘Every young girl has a dream and I am no exception.

‘I dream to star in the film Rapunzel because the length and colour of my hair is very close to the image of a fictional character. 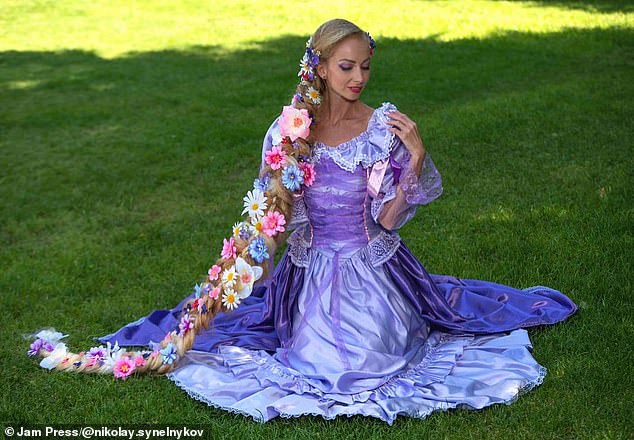 After a change in outfit, Alena also posed in front of a castle, with her hair styled in a braid with flowers 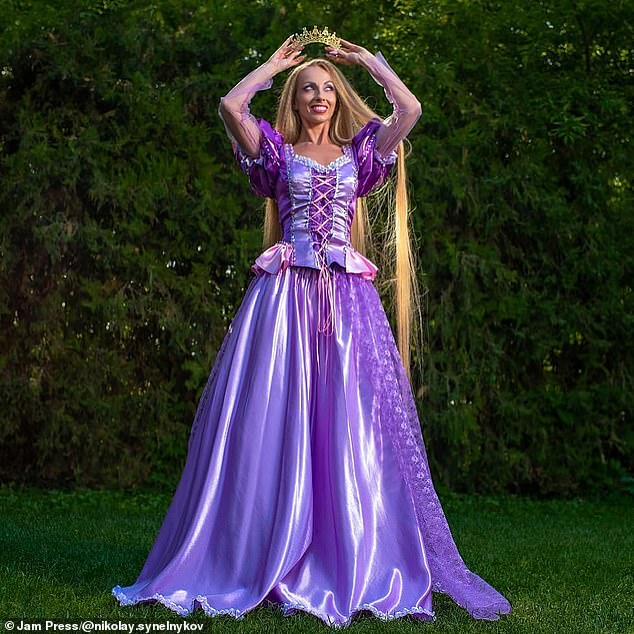 Crowning glory: Alena, pictured during a Rapunzel-themed photoshoot, trims the ends of her long hair every six months to make sure it stays healthy

‘And while this is just a dream, one of the photographers from Ukraine suggested that the plot of the cartoon be conveyed as much as possible in beautiful and colourful photographs.’

The photoshoot took several months to prepare and Alena wanted to make sure the looks were perfect, down to the finest details.

She said: ‘The preparations for the photoshoot went on for several months to choose the right and suitable locations, sewing the outfits and purchasing the necessary requisites, including the unusual hairstyle-braid with flowers. 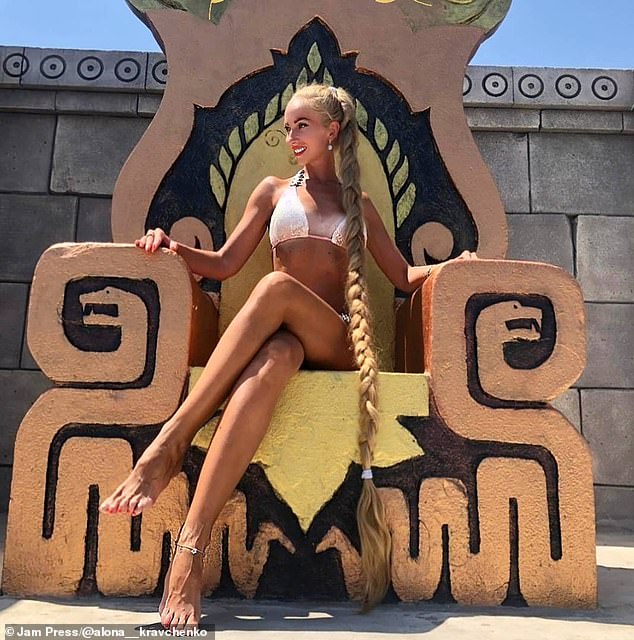 Alena washes her hair once a week, which takes an hour each time and she uses natural and professional hair products to control frizz 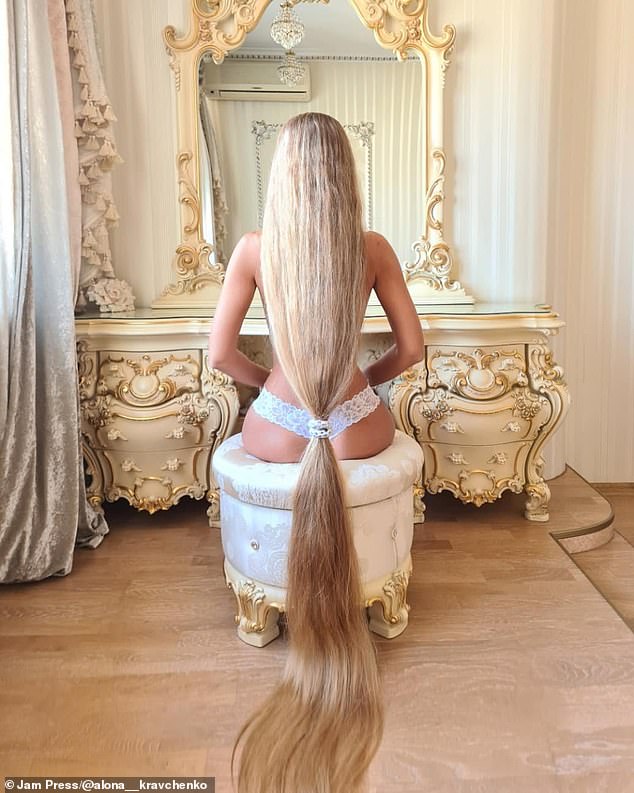 Strike a pose: Alena has amassed more than 70,000 followers on Instagram. Her long locks take time to maintain, so Alena only washes her hair once a week

‘To make the image look as similar as possible to Rapunzel, I wanted to think over everything to the smallest detail.

‘The shoot took place in my hometown and all the locations were selected very perfectly.

‘I hired a photographer from another city to take the fabulous photos that I am now ready to show the world how the well-known cartoon Rapunzel looks like.’

However, long locks are not easy to maintain.

Alena washes her hair once a week, which takes an hour each time and she uses natural and professional hair products to control frizz.

She also combs her hair twice a day and trims her ends every six months to keep her mane healthy and strong.