Home » RHOBH Recap: Erika Jayne Snaps At Garcelle Beauvais After She Shares A Secret About Tom

RHOBH Recap: Erika Jayne Snaps At Garcelle Beauvais After She Shares A Secret About Tom

Yikes! Erika Jayne unexpectedly went off on Garcelle Beauvais during the Aug. 4 episode of ‘RHOBH’.

Erika Jayne has been pretty open about her divorce throughout the current season of The Real Housewives of Beverly Hills. But everyone has their limits — Erika proved that during the Aug. 4 episode, when she snapped on Garcelle Beauvais.

While on a private hike with Garcelle and Crystal Minkoff in La Quinta, Erika revealed that ex-husband Tom Girardi tries calling her often. It’s something she hadn’t revealed until that moment, but later, when they rejoined the group at Kyle Richards‘ house, Garcelle didn’t think it’d be a big deal to share that info with everyone else. After all, most of the ladies are some of Erika’s closest friends. But Garcelle was sorely mistaken. 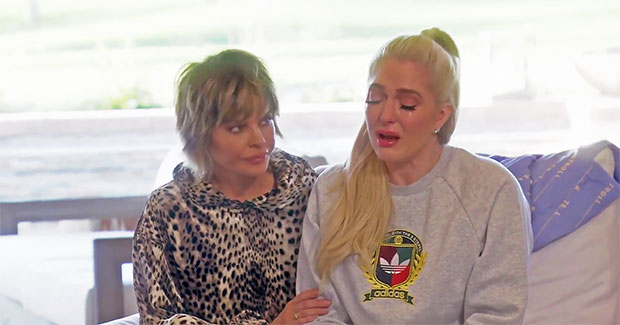 Garcelle asked Erika whether she minded her sharing the information, but Garcelle didn’t even give Erika a chance to respond before she did so anyway. So immediately after Garcelle told the ladies that Tom calls Erika often, Erika clapped back: “Well, I do mind you saying that because I feel like you’re betraying my friendship right now, but please, have your moment.”

Garcelle couldn’t believe what she was hearing, and said she refused to say anymore, but it didn’t help. Erika was already fuming. “So let me tell the f***ing story [then]. Tom calls me all the time. I won’t take his call. And you got it out of me once — and now you want to do it again”, she said as she directed more anger towards Garcelle.

Garcelle said it wasn’t her “intention” to hurt Erika, but Erika told her to stop trying to “sugarcoat it”. Considering Erika had previously claimed that Tom cheated on her, and more, Garcelle couldn’t understand why revealing what she did would “set her off”.

Erika said she was “sharing a private moment” and “sometimes not everything is up for discussion”, as tears streamed down her face and Lisa Rinna tried consoling her. “I’ve been very open and very honest, so I think that was dirty,” Erika told Garcelle.

“There’s only so much I can take right now,” Erika told the group before getting up and escaping to the bathroom, where she could be heard crying really hard.

After Erika left the room, Crystal told Garcelle that after Garcelle got into the car, Erika asked her (Crystal) not to the share that info with the group — but because Garcelle was already in the car, she didn’t hear Erika make that request. So Crystal defended Garcelle to the group, and Garcelle said she’d “never want to hurt” Erika.

In her private confessional, Sutton Stracke then wondered: “What did Garcelle ask that was so bad? People don’t react like that unless something else is happening.” Hmm… she does make a good point. Could Erika’s story not be adding up?

Garcelle was left wondering that after the ladies told her that Erika claimed Tom cheated on her. Yet, one month prior, when Garcelle asked Erika if a third party was involved in their split, Erika said, “No. Not that I know of”. So which is it?