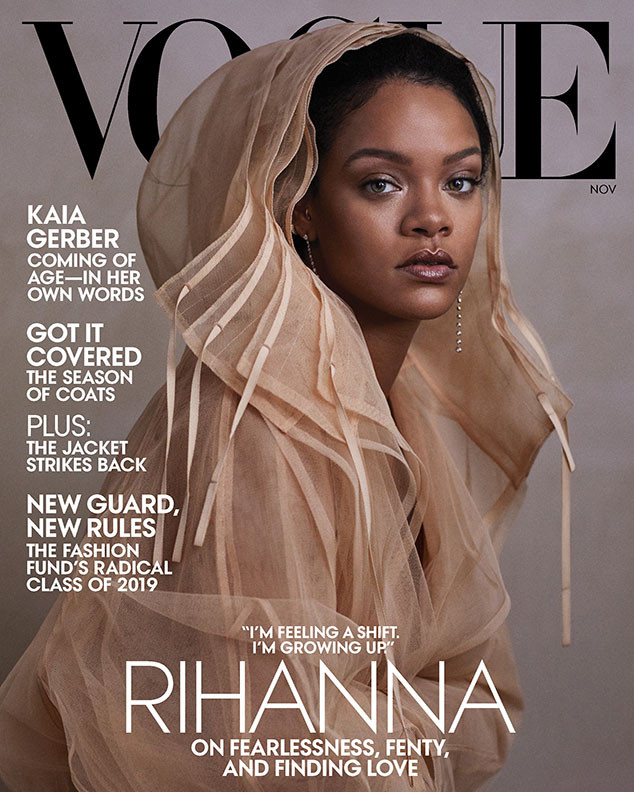 Rihanna is ready to speak out.

The musician is Vogue magazine’s November cover star, and in her in-depth interview, Rihanna leaves everything on the table. Since coming onto the music scene, Rihanna has already had an impressive career to say the least. In the last few years she’s focused her efforts on new music, creating a beauty empire and her budding romance with Saudi businessman Hassan Jameel, whom she has been linked to since 2017. First things first, when is the new album dropping!

Don’t worry, while the wait isn’t over yet, Rihanna has plans to release a new album titled R9, and said that even with all of her other business ventures, giving up on music was never in the cards.

“Me the designer, me the woman who creates makeup and lingerie—it all started with music. It was my first pen pal–ship to the world,” she shared. “To cut that off is to cut my communication off. All of these other things flourish on top of that foundation.”

As for what the new album will entail, Rihanna shared that she is going back to her roots.

“I like to look at it as a reggae-inspired or reggae-infused album,” Rihanna said. “It’s not gonna be typical of what you know as reggae. But you’re going to feel the elements in all of the tracks … Reggae always feels right to me. It’s in my blood. It doesn’t matter how far or long removed I am from that culture, or my environment that I grew up in; it never leaves. It’s always the same high. Even though I’ve explored other genres of music, it was time to go back to something that I haven’t really homed in on completely for a body of work.”

Her new music might also include a few love songs, because the singer confirmed that she’s in a happy relationship. “Yeah, I’m dating,” she shared. “I’m actually in an exclusive relationship for quite some time, and it’s going really well, so I’m happy.”

But she didn’t just leave it there. The singer opened up about the topic of having kids too. “Without a doubt,” she revealed.

But with everything currently happening in the world and our nation, the singer has found ways to put a positive spin on it and become a force for good.

“I feel like the darkness has actually forced people to find this light within them where they want to do better,” she shared. “It’s easy when you think everything is going really well and perfect. When everything is flowers and butterflies and you’re in your own bubble and your own world. But to see it, to know it’s happening—it pushes you to want to be the light in the world.”