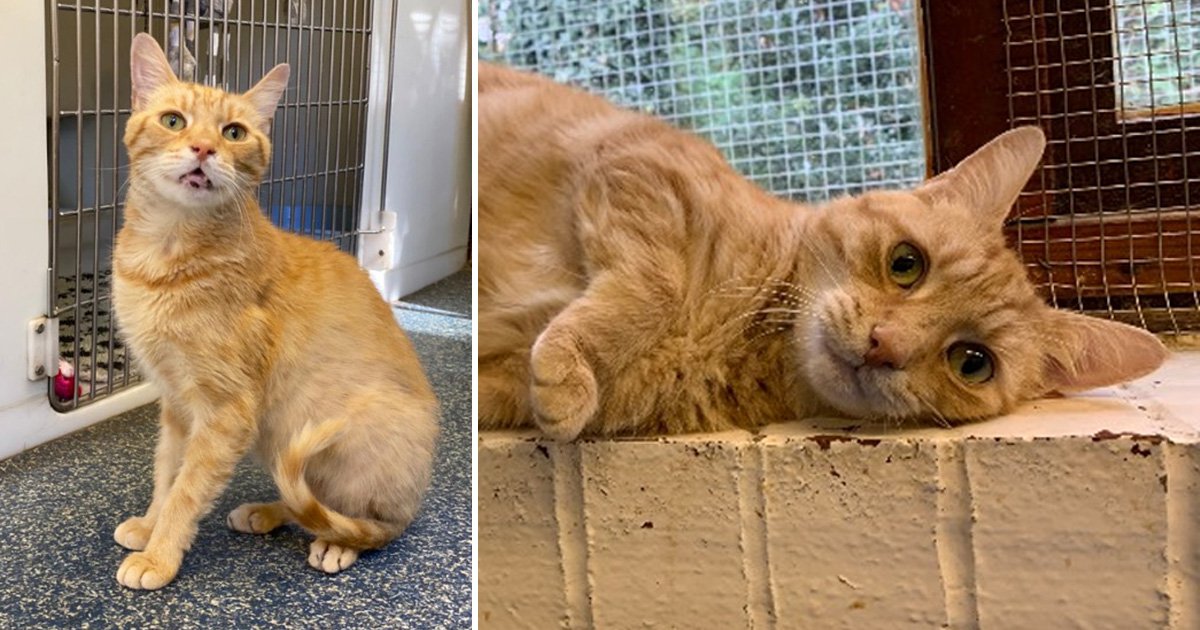 Do you have space in your heart and home for Oscar, who’s been given the nickname of ‘the unwanted cat’?

The poor old cat is currently on his third stay at an RSPCA shelter, after being repeatedly rejected by owners.

The 10-year-old ginger kitty got national attention in October when the Burton shelter in Stretton posted an appeal to find him a home, in which staff said not one person had taken interest in him during his second time in their care.

We rejoiced when Oscar was then taken in by a new family, but, sadly, those owners have ‘reluctantly’ had to give him up once again.

This means that yet again, the cat is looking for another home – hopefully one that will stick, this time.

Staff at the shelter say Oscar is a lovely cat, but he can be a touch fiery.

His third return is due to him ‘attacking’ one of his owners.

On their Facebook page, shelter staff wrote: ‘Oscar is on his third stint with us since September, after being returned again due to his (sometimes) feisty nature.

‘We’re so sad to see Oscar back in the cattery and our mission is to find him his final, 100 percent, no giving up on him forever home.

‘Oscar is a great companion to have around, he is outgoing, adventurous and friendly. Yes, friendly!!!

‘Oscar is not a grumpy guy through and through and actually 98% of the time he is a chatty and good natured boy who is happy to potter about doing his own thing and pop back over for a quick meow and a head bump to remind you he’s still around.

‘He’ll purr excitedly when he sees us in the morning and is far from shy or nervous of people.

‘However, he has shown an aggressive side on occasion and has unpredictable moments.’

Having got to know Oscar, shelter staff think the cat will calm down as time goes on, but are keen to find him an owner who’ll be patient when it comes to any ‘grumpy outbursts’.

‘Oscar’s new owner will need to understand he might always have this streak in him and be prepared to accept him for who he is,’ they write.

Problems seem to occur when Oscar is pressured to be super snuggly or is around other cats.

He also may have an issue with older women, but that’s not confirmed. Still, a young or male owner might be a better fit.

‘He has his grumpy moments, mainly when other cats wind him up, but all in all he hasn’t shown us too much feistiness,’ say the RSPCA.

‘We very much take the approach of letting him be independent and don’t put pressure on him for cuddles and we think this has definitely helped.

‘That’s not to say he doesn’t initiate affection… most days he’ll happily purr around our legs to say hi and allows a few strokes no problem.

‘His main outbursts have not been witnessed by us as they were with his previous owners, so it is hard for us to be able to pinpoint something specific that seems to upset him.

‘However we have noticed the people he has been most grumpy with have all been older ladies. This could be a coincidence but given that he is a stray we’re not sure whether he has suffered trauma in his past associated with women of a certain age.

‘Given this we think the best approach would be to look for a home with a younger or male owner in the hope we can break the cycle.’

The ginger cat will also need a home where there are no other pets or children, with an owner ‘who is happy to let him do his thing and won’t try to mould him into the perfect cuddly lapcat’.

He’ll also need access to a garden, as he loves to be out and about.

If you think you could be Oscar’s perfect match, you can get in touch through the RSPCA website.