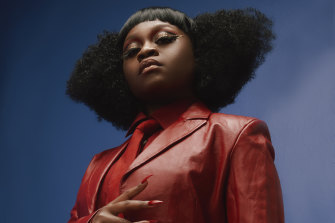 In the world of Sampa Tembo, music is more than just soundtrack. It’s the connective tissue that binds people together, a form of expression central to everyday life. As a child, the virtuosic artist, better known as Sampa the Great, found herself at a kitchen party, Zambia’s answer to the bridal shower. There, the power of song overcame her for the first time.

“In Africa, music is embedded in everything we do,” she says. “It is part of the way we express the general mood of the people, whether are happy or sad.” She flashes an incandescent smile. “I went to a kitchen party, and at one point, there were 10 to 15 people singing in unison. It was like they were singing in one voice. They are singing in languages I don’t understand, but I still understand. [Music] is a soul language.”

Soulfulness is hard to describe but easy to identify. Nina Simone had it. So did Amy Winehouse. When some people sing, you can’t help but believe them. I meet Tembo, 28, over Zoom while she’s quarantining in Sydney, where her show An Afro Future is due to headline the Vivid festival. Her hair, half-braided, spills across her shoulders. There’s a bucket hat perched on the chair behind her. She’s off-duty but her charisma bounces off my computer screen. 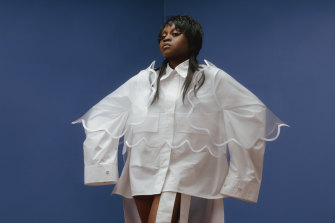 We meet again nearly three months later. After the pandemic cancelled her Sydney concerts, Tembo relocated back home to Zambia, where she’s immersed, for the first time in two years, in a new project.

“The goal was in the next 10 years, I’ll come home and make music,” she tells me. “That has fast-tracked to now.”

Like all great rappers, Sampa’s way of speaking is polyphonic. She tells stories within stories. Sometimes, she refers to herself like she’s a character. She punctuates her best sentences with a statement that could just as easily apply to the scale of her artistic vision: “100 per cent.”

Tembo arrived on the cultural radar in 2015 with The Great Mixtape. Her debut release, produced by Godriguez, knitted jazz and blues and beats with clever, searching rhymes. “Big bold women, round of applause/ Get-my-goals women, round of applause,” she rapped on F E M A L E. But her swagger was always just an entry point to an approach more complex and intricate.

Since then, she has released 2017’s Birds and the BEE9 and The Return, the kaleidoscopic 2019 album for which she won the 2020 ARIA for best female artist. In 2019, she became the first artist in Australian music history to become a two-time winner of the Australian Music Prize. 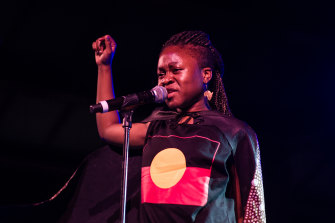 Sampa the Great performs at the St Jerome’s Laneway Festival in Brisbane in 2017.Credit:Marc Grimwade/Getty

Role model. Success story. Icon-in-the-making. So often, simplifying the trajectories of black female artists means glazing over their contradictions. This is the opposite of what Tembo stands for.

“In Western countries, as an African woman, there’s a limited view of who you are,” she says. “I have to be all elements of myself – my sexuality, my love, my rage.” She pauses, eyes blazing. “I want to express that in my work.” 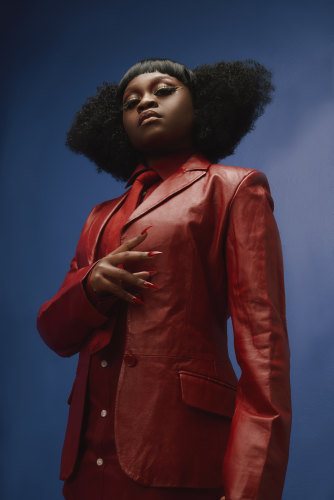 As a child, Sampa fell in love with music at a kitchen party in Zambia.Credit: Aart Verrips

Tembo was born in 1993 in Ndola, Zambia, a landlocked southern African country known for its gorges and waterfalls. As a child, her family relocated to neighbouring Botswana for her father’s job, the sense of living between places part of her life for as long as she can remember.

“It was definitely a fusion of those cultures,” she grins. “I remember making jokes. ‘Ha – you have one country, but I have two!’ Botswana people really love to laugh. I never felt like I was at a loss.”

Tembo and her siblings were encouraged to voice their views. “[My parents] would ask us our opinion on politics and I would say, ‘I’m seven, I don’t really know,’ she says, teasingly. Like middle children everywhere, she was desperate to express herself. “I remember my mum giving me a diary and saying, ‘write it down’.”

Then, at nine, she overheard an older cousin play Tupac’s Changes, the American rapper’s 1998 challenge to police brutality and racial injustice. “It sounded like he was having a conversation,” she says, still awestruck. She started writing poems, learning rhymes. In grade 11, she says, she performed for grade 12. “It was a huge deal because they were the big dogs,” she laughs. “I knew that this was my thing.” 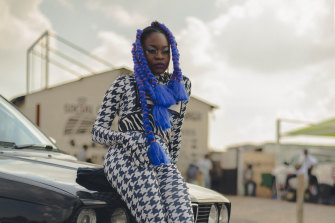 Sampa found her community in Melbourne. ‘I looked over at the crowd and realised ‘you’ve all experienced what I’m expressing’,′

At 18, Tembo relocated to San Francisco, an introduction to the wider world that was also marred by a new awareness of how the world perceived her. In 2014, she moved to Sydney, where she studied audio engineering, an immigrant’s familiar attempt at stability. But everything changed, she tells me, when a close friend who had been avidly pursuing music passed away.

“He was a person doing what I wanted to do and doing it with courage,” she says. “I didn’t know anyone here. There were so many stakes. But the reality of life being that short was too big of a hit to my mind. It was literally a life-and-death situation.”

In Melbourne, she found community. There, she performed spoken word at a gig organised by Still Nomads, a collective of African-Australian artists. Suddenly, she didn’t have to translate her experiences. “I looked over at the crowd and realised ‘you’ve all experienced what I’m expressing’,” she says. It set her free.

The Great Mixtape spoke to identity and resilience, but Tembo’s success unfairly anointed her as a spokesperson just as the debate around a lack of diversity in Australian music was growing heated.

“In Australia, [I had to balance] who I am as a human being and how I’m seen as a black artist,” she points out. “You become an ambassador for a community that you yourself have been introduced to.” 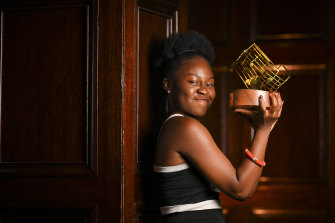 The singer is the first two-time winner of the Australian Music Prize, picking it up in 2018 (pictured) and 2019.Credit:Eddie Jim

Artistic breakthrough came in the form of Healing, from Birds and the BEE9, lush bass lines swirling around incantatory chanting and gorgeous harmonies. Also, on BB9 – as Tembo calls it – is Black Girl Magik. It’s an ode to black joy accompanied by an exquisite video in which Tembo and a group of African women, including her younger sister Mwanje, play chess, sing and dine in a light-splashed greenhouse. They bask in a white-gowned splendour both sublime and queenly. Tembo and I talk about the limits of turning trauma into art.

“We experience joy, we experience love – and it’s not being seen on any platform,” she says, sweeping her hand for emphasis. “I’m not a blueprint written by someone who doesn’t even look like me.”

Tembo has played Glastonbury. She’s supported Kendrick Lamar and Lauryn Hill, a childhood idol and toured around Europe with Joey Bada$$. She began her career in Australia but BB9 sent her stardom into the stratosphere. At the 2019 ARIAs, she was awarded best hip-hop release for Freedom, a RnB-heavy tribute to artistic expression. It was cut from the live broadcast.

Her riposte would come the following year, streamed live from Botswana. “When we win awards, they toss us on the ad breaks, of course,” she declared. Then, she burst into a transcendent performance of Final Form, a whirlwind of singers, dancers and guitarists, Tembo clad in yellow, standing in her power, at the centre of it all. (And incidentally she picked up another three ARIA awards, including best female artist.) 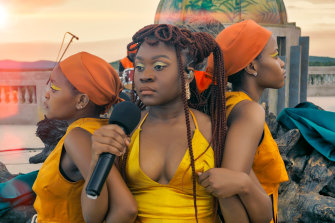 Sampa the Great performing from Botswana at the 2020 ARIA awards at which she won Best Female Artist Best Independent release and Best Hip Hop release.

She made The Return, produced by Australian-born Filipino producer Silentjay, after returning to Zambia. Back home, she tells me, “the music changed drastically”. “It’s not about longing to belong to a place anymore because now you are there.” The Return is diaristic. There are references to Bemba, her mother’s language, and Kwaito, the addictive form of house that emerged in Johannesburg post-apartheid.

In the video for Final Form, Tembo raps to a technicolor backdrop of markets and barbershops, masked Nyau dancers bucking and weaving around her. Watching it is electrifying.

For Tembo, making music means realising visions, sharing the stage with artists of colour around her. The Return featured a short film in which she jams in the studio with friends and collaborators. She looks blissful. 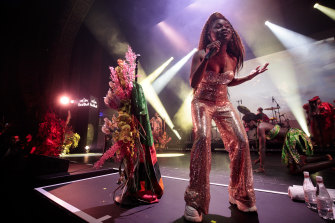 Sampa the Great on stage in Melbourne in 2019.

Last October, she live-streamed a new performance called Black Atlantis as part of the virtual Planet Afropunk festival. She croons into her microphone in a sequinned gown, hair arranged like a cosmic priestess. She breaks into OMG, rapping alongside dancers with bejewelled faces. She writhes against a satin backdrop alongside women wearing dark sunglasses, evoking all the artistry of a young Grace Jones.

Black Atlantis is shaped by Afrofuturism, the aesthetic and social movement that imaginesblackness, free of racist history. “I think Afrofuturism is about creating African perspectives, without colonialism coming into the question,” she says.

Tembo confesses that since returning to Lusaka, her art has come easy. “We are doing three songs a day.” “I was like – ‘what’s going on? Is this good?’” She shakes her head, incredulous.

Afrofuturist thought swaps scarcity for abundance. It finds continuums between past and present.

Lately, Tembo has been listening to Zamrock, the wildly influential musical form that combines African rhythms with psychedelia and garage rock that flourished in the early 1970s after Zambia’s independence.

She has been spending time with Emmanuel Jagari Chanda, who fronted the legendary Zamrock band WITCH. She’s been thinking a lot about lineage, about histories that thread moments of social upheaval.

She sends me a new track called Never Forget, a propulsive tribute to Zamrock that features renowned Zambian rapper Chef 187, a chorus by Mwanje and contributions from her cousin, the musician Tio Nason. Hear it once and you want to hit repeat. 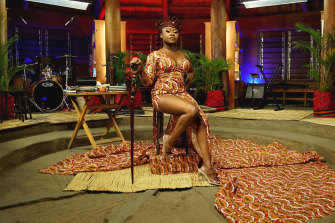 “You had to wear that armour for survival, but you don’t have to do that anymore.”Credit:Isaac Tuba

“It’s so beautiful to know that these sounds are there, the sounds our parents listened to,” laughs Tembo, who plans to release the material she’s been working on early next year. Mwanje wrote the chorus herself. And then my cousin starts singing. It’s literally this thing when we are all in the studio, we are all riffing off each other, and we are all related to each other.”

This new body of work, Tembo says, reflects a confluence of languages and influences. It speaks to a sense of wholeness she’s been searching for since she started.

“The whole of Sampa the Great can be expressed without thinking through all these pressures,” she smiles.

“You had to wear that armour for survival, but you don’t have to do that anymore.”

Sampa the Great’s new music will be released in early 2022.

TV, movies, Find out the next TV, streaming series and movies to add to your must-sees. Get The Watchlist delivered every Thursday.