Prime Minister Scott Morrison has expressed his disappointment with a deal that saw taxpayers hand over $33 million for a piece of land near the western Sydney airport later valued at just $3 million.

The Auditor-General last week found Infrastructure Department officers acted unethically in setting up the 2018 deal and concealed information from their superiors and minister, including that the Commonwealth would be paying 22 times more per hectare than the NSW government paid for its portion of the same land. 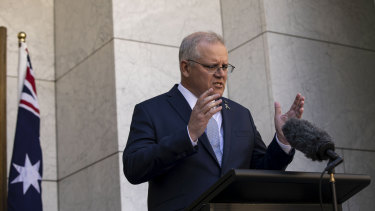 Prime Minister Scott Morrison is not happy with bureaucrats over a $33 million land deal near the Western Sydney airport.Credit:Dominic Lorrimer

The 12.3 hectares, known as the Leppington Triangle, was owned by the billionaire Perich family's Leppington Pastoral Company, which is now leasing it back from the government.

Its $30 million – plus $3 million GST – price tag was from a valuation done by a firm chosen by Leppington.

During negotiations over the sale, meetings with the landowners were held in coffee shops with only one departmental officer present and no record of the discussion. Phone conversations were recorded in an ad hoc manner.

The Infrastructure Department also gave the auditor inaccurate information when questioned about the valuation process.

Mr Morrison said there were clear lessons for the department to learn.

"These events are not things I'm happy about," he said on Tuesday, the first time he's talked about the deal.

"There is a review going on presently within the department and I understand why Australians would feel very disappointed.

"I'm also disappointed in it and I don't think it's something that I would ever like to see repeated."

The department cleared itself of wrongdoing in a review in 2019, but the Auditor-General said it didn't appear to have been conducted by anyone outside the department's Western Sydney Unit.

Infrastructure has now appointed an independent investigator and auditor to examine the land sale, the conduct of Western Sydney Unit officers and to make sure it finds and deals with any other problems with departmental processes.

Deputy Prime Minister Michael McCormack said on Monday that in time the $33 million would come to be seen as a bargain.

Asked whether he backed that assessment, Mr Morrison said he agreed with Mr McCormack that the new airport would be "an absolute jobs machine" and "one of – if not the – biggest game-changers we've seen in infrastructure in the Sydney basin in a very, very, very long time".