Home » ‘Snark and sarcasm don’t exist’: Why Ted Lasso is the happiest show on TV

‘Snark and sarcasm don’t exist’: Why Ted Lasso is the happiest show on TV

The greatest compliment Jason Sudeikis has ever received for playing Ted Lasso, an American football coach who becomes manager of an English soccer team despite his complete ignorance of the game, came from someone who actually knew something about it. “He said, ‘you got everything wrong, perfectly’,” the Saturday Night Live veteran says over a video link from his home in New York.

That was back in 2013, long before the endearingly upbeat Apple TV+ comedy of the same name, the second season of which starts July 23, was a glimmer in anyone’s eye. 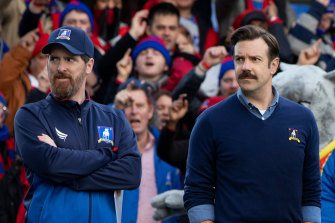 Brendan Hunt as Coach Beard and Jason Sudeikis as Ted Lasso in the second season of the show that was spawned by an ad.Credit:Apple TV+

As eagle-eyed fans will know, the opening credits of Ted Lasso feature a disclaimer stating it is “based on pre-existing format/characters from NBC Sports”. That’s because the character was created by Sudeikis, Brendan Hunt and Joe Kelly for a promo for the American network’s coverage of English Premier League, along with the tagline “it’s football, but not as we know it”.

That proto-Ted was hopelessly out of his depth, marvelling at the fact his team, Tottenham Hotspur, had a logo featuring “a cock on a ball”, committing his side to fighting hard “all four quarters”, and struggling to comprehend foreign concepts such as relegation and offside. Six-and-a-half hours after he was hired, Ted was sacked.

A year later, a second spot found Ted working as an “expert” pundit, drawing on his vast experience of the Premier League. Together, those two ads have amassed more than 23 million views on YouTube alone – many of them from far beyond the American market for which they were intended.

“I had a hunch there might be a story to be told here, a bigger one,” says Sudeikis of that far-flung acceptance of his goofy creation. So in 2015 the three old comedy friends – who had first worked together in Amsterdam in the early 2000s, a time when Hunt might occasionally be seen on stage impersonating the famously fiery Manchester United captain Roy Keane (inspiration for the series’ Roy Kent) – got together to write. Four days later they had the outline for a series. By 2020, and with veteran comedy writer-producer-director Bill Lawrence joining the team, they finally had a show.

You can count the number of successful TV sports comedies on one hand – with several fingers to spare – but what really makes Ted Lasso special is the tone. No matter how terrible the circumstances he confronts, Ted remains relentlessly, ridiculously, but never retchingly upbeat. In a world suffused by cynicism, it’s a radical posture to strike.

Sudeikis says he loves playing the optimism of Ted, a man who embraces being called a “wanker” by the fans of struggling AFC Richmond as a term of endearment.

“That notion that everybody’s fighting their own battle is very forgiving and freeing when you’re faced with opposition,” he says, channelling Ted’s mid-western spin on Zen philosophy. “It’s not about the elimination of bullies and bad guys and cynicism and ego and apathy – it’s about how you respond to those things.”

He finds it fun to play a character who is “just accepting of all things”. But he’s been a little surprised, he says, to see how it has influenced the mood off-screen too. 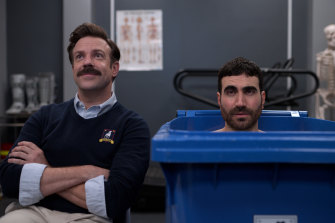 The circle of laugh: Sudeikis with Brett Goldstein as Roy Kent, a character clearly inspired by Roy Keane, whom Brendan Hunt used to impersonate on stage in the early naughties. Credit:Apple TV+

“Snark and sarcasm really don’t exist on the show,” he says. “I mean, they exist in the writers’ room, they exist on set, they exist in interviews. But the show, kind of like a foreign agent in the human body, rejects it behaviour-wise on set, you know.

“Maybe trying to live up to this fictional character of Ted Lasso, the philosophy by which he seemingly lives his life, is enough,” he muses. “It’s been something else.”

Ted Lasso is on Apple TV+. Season 2 is available from July 23.