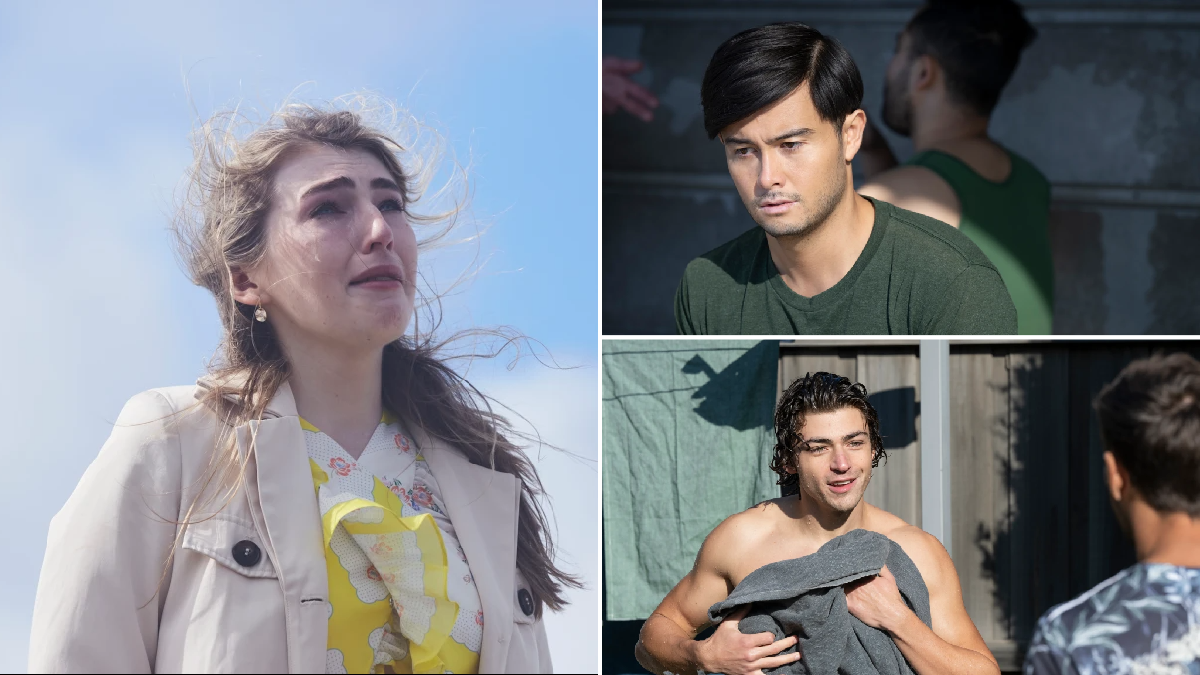 David’s (Takaya Honda) reality is about to slap harder than most in Neighbours as he moves to his new home behind bars, while Mackenzie’s (Georgie Stone) isn’t much better as she hide the truth from her loved ones.

David is facing spending remand in a maximum-security prison and it’s obvious he will struggle to survive there. The family do what they can to try and help him, but when a sinister warning comes in, it’s a matter of time before things get a whole lot worse.

Mackenzie is still grieving for the loss of Hendrix (Ben Turland) but outwardly seems to be coping fine. The cracks are beginning to show, but will anyone notice before she falls apart?

Byron (Joe Klocek) is harbouring a secret so big that his adoring mother will have kittens when she finds out. Toadie’s (Ryan Molony) the one who is close to discovering the truth, will he learn about Byron’s sexy side hustle?

Paul Robinson (Stefan Dennis) is on a cliff edge when Terese (Rebekah Elmaloglou) learns what he’s been up to with her money. Is he about to become unstuck?

Here’s what’s ahead in Neighbours.

David’s life at risk as he’s targeted in jail

David and his family are horrified to learn he is to be held in a maximum-security prison while on remand and awaiting sentencing. They’re all well aware he’s not cut out for that environment. Dad Paul takes him to one side to give him some life-saving tips from his own time inside – he needs to adapt to survive. Paul has good intentions with his pep talk, but the words only serve to frighten David further, he thinks there’s no way he can adapt enough. Sure enough, within a short space of time, his fears are realised. He’s handed a terrifying warning that leaves him worried for his life, and before long the threat becomes a reality. His family jump straight into action to get him out of there as fast as possible, but for the time being at least it looks like David is staying put. But then Paul hits the jackpot – he discovers his old foe Holden is in the same prison. Paul throws money at the situation in a bid to save his son from the horrors that await him. His plan fails, and the family reels as they learn what’s happened to David. But a lifeline comes from a surprising source – Gareth’s ex Emma has a proposal to ensure his safety. Will they make a deal with the devil?

Mackenzie is a walking, talking brave face. As far as everyone can see, she’s handling her grief amazingly. But underneath, there is another reality going on. She accepts a letter from Sadie which appears to be taken in good faith, but behind closed doors, an angry Mackenzie destroys the letter. Is this a sign she’s about to crack?

Jane’s golden boy has returned, but he comes with baggage. Byron is not interested in his first meeting with Rebecchi Law, and instead is seen taking confidential papers to a different meeting with a mysterious client. Then things become clear – he’s really a gigolo. And a good one at that by all accounts – he’s run off his feet with clients and starts to struggle juggling this secret work life. It gets in the way of his work with Toadie; he shows up late, leaves early, and Toadie starts to notice. Byron realises he’s on slippery ground and tries to up his game, but at the rate his popularity is going, he won’t be able to keep it up forever. Will Jane learn the truth?

David’s situation is hitting Chloe hard, so she does what she knows best and aims for total distraction. She tries to achieve this by getting saucy with Kiri, but things just don’t click, and it all feels a bit weird. It looks like Chloe might be losing her grip on Kiri, as Nicolette later accepts an invitation to Kiri’s church hoping to find peace, but instead grows closer to Kiri. Has Chloe lost out?

Kiri, meanwhile, is a bit blindsided when Glen admits he missed her party because he’s relapsed. But it’s the gateway for the pair of them to open up to each other and they reach a happy conclusion – Kiri admits she’s not looking for another dad, she just wants a friend. They both want the same thing and they’re finally able to move forward.

Paul has been so hell-bent on bringing down Terese that he’s lost sight of what’s important, namely – his son David. But a slip-up could cost him everything. Terese finds out that Sapiko & Bazz holdings has gone bust and immediately she knows something is up. With some help from Byron, she learns he has been trying to hide money and it’s exactly what she needs to hear – now she just needs proof before going in for the kill. She confronts Paul, who pleads ignorance, even going as far as to try and trick Terese into believing she’s made a mistake, but he wildly underestimates his soon-to-be ex-wife. Leo is also disgusted by his behaviour and tells him so, particularly in how he is ignoring the person who needs him the most right now. It’s enough to get Paul to reflect and he admits he hasn’t been playing fair. In a bid to save some dignity he makes Terese an offer – he’ll buy her out of Lassiters. It’s her chance to get out from under his grasp, will she take it, or is the fight only just beginning?