Home » Lifestyle » Struggling for new books for your kids? Here are some for range of ages

Struggling for new books for your kids? Here are some for range of ages

Looking for some magic reading for the young readers in your family? Here's a selection of books from the past year.

For the youngest eyes

Forget Tinkerbell and Puck. If fairies exist, let’s hope they are all like the Underhills. In this adventure, April of April Underhill, Toothfairy fame and her twin sister Esme are visiting Grandma and Grandpa when an urgent fairy request arrives; a girl on a flight from Ghana has lost a baby tooth. No helicopter parenting here, the twins are trusted with this crucial task, with a word of caution from Grandpa: "Akuba must never see you. You are spirits of the air." The Underhills: A Tooth Fairy Story (Walker) is classic Bob Graham, proving that tiny hearts can also be huge. 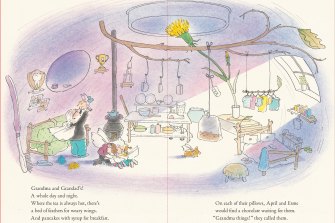 April and Esme are off to their grandparents in Bob Graham’s latest book.Credit:Bob Graham

Mister Singh is making coconut dahl, Miss Ishida is whipping up Oyako Don, and while Jeremiah is preparing a batch of peanut-butter-and-chocolate-chip cookies, Senora Flores is adding the final touch to her black bean soup. These are just some of the delectable options on offer at Lunch At 10 Pomegranate Street (Scribblekids) by Felicita Sala. This eye-catching, mouth-watering cookbook beautifully evokes the joy of food and its power to unite.

At the invitation of his many fans, the stubby-winged one decides to visit Australia in Mr Chicken All Over Australia (Allen & Unwin). First stop is Tourist Information, where a koala pulls together an exhausting itinerary based on Mr Chicken’s wishes to "… go everywhere, see everything and meet everyone". 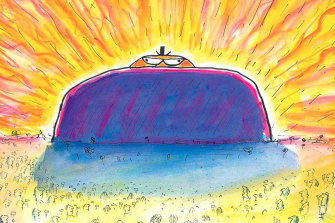 The trip takes in all the big icons, from prawn to banana, plus the Sydney Harbour Bridge, Uluru (which he does not climb), and an unexpected trip courtesy of the Royal Flying Doctor Service due to "acute pavlovaitis". Once again, Leigh Hobbs, the former Australian Children’s Laureate, delivers a wildly entertaining adventure loaded with laughs and gloriously detailed illustrations.

A group of school kids are ready for a new year, but nothing prepares them for their new teacher, Miss Kraken, an odd creature who loves rules and keeping her class in order. However, on an excursion to the aquarium, Miss K goes missing. Did she end up in a calamari salad? Nicki Greenberg’s Miss Kraken (Allen & Unwin) is a delightfully quirky book full of wit and warmth.

A game of cat and mouse takes a surprising turn in Karen Foxlee’s Horatio Squeak (Walker) when tiny Horatio receives a party invitation extended by three marmalade kittens. The flawless rhyming will appeal to young readers, while the slightly macabre tinge throughout creates an unexpected but welcome dramatic tension. Evie Barrow’s illustrations are picture-perfect, and exude a cozy, vintage feel. 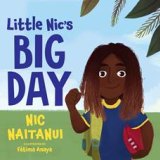 The first day of school causes a tsunami of emotions in most children, and many of those universal doubts and fears are beautifully addressed by West Coast Eagles ruckman Nic Naitanui in Little Nic’s Big Day (Albert Street Books). While the masterful rhymes and lively illustrations by Fatima Anaya makes this book hugely entertaining, it also does a great job of acknowledging the fact that making new friends can be hard. With loads of culturally and physically diverse characters, this is a delightful balm to help ease any first-day nerves.

More standout titles: Tilly (Scholastic), a touching story about secrets, loss and discovery by super duo author Jane Godwin and illustrator Anna Walker. And Berbay Publishing has done it again in Australia’s Past: The Good, the Bad and the Silly with its stunning illustrations by Bern Emmerichs and compelling stories reimagined by John Dickson.

Master storyteller Paul Jennings reels you in with a tale about loss and adventure in A Different Land (Allen & Unwin). After World War II, Patricia and two plucky children, Christopher and Anton, are trying to make a new life for themselves after spending months in a migrant camp in Australia. 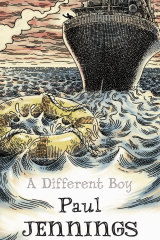 A Different Land by Paul Jennings.

She secures their release by successfully applying for a job by mail, only to lose it the moment she arrives at The Last Coach Hotel and General Store – because the sexist owner had assumed "Pat" was a man. A short, but captivating story about Christopher, and his emotional struggle to fit in, and survive in outback Queensland.

Petite Rock is a master of disguise, Homer has visions, and Tumbler can slide through pipes with ease, which comes in handy when an underground demon rudely drains their local fountain. Exciting and energetic, readers will fly through Real Pigeons: Splash Back (Hardie Grant) by Andrew McDonald and Ben Wood, the fourth instalment in this uproarious, brilliantly silly ride of a book that will prove irresistible to reluctant readers.

No sign of pigeons in Tim Flannery’s Explore Your World (Hardie Grant), an addictive read beautifully illustrated by Sam Caldwell. Crabs have two stomachs, and one of them has teeth, the Japanese spider crab has a leg span of more than four metres, the oldest chameleon fossils are more than 60 million years old, and were discovered in China. Flannery’s passion for some of the wildest creatures on earth is infectious.

Kids Who Did: Real Kids Who Ruled, Rebelled, Survived and Thrived (Allen & Unwin) by Kirsty Murray is an incredibly inspiring and moving read that rightly celebrates incredible acts of selflessness and bravery. Billy Corcoran was nine years old when he took on a bull that almost killed his father. Ruby, a young Ngarrindjeri girl, was living with her relatives in South Australia when strangers arrived and told her they were taking her to the circus. Ruby and her siblings were quickly separated, to become, along with more than 100,000 others, part of the stolen generations. As an adult, Ruby Hunter became a foster mother to 12 children and was the first Indigenous singer to sign with a major record label. 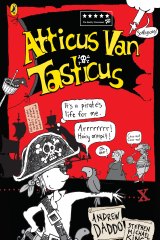 For as long as anyone can remember, when a member of the Van Tasticus family turns 10, they get one chance to get their hands on the family money. When it comes to Atticus Van Tasticus, and he gets to choose whatever he fancies from Grandnan’s shed, Atticus picks a boat – a pirate ship, in fact. Atticus Van Tasticus (Puffin) by Andrew Daddo and Stephen Michael King (Puffin) is a super-charged, engaging read, packed with fresh characters, raucous humour, and massively entertaining illustrations by King.

More standout titles: in The Secrets of Magnolia Moon (Walker) by Edwina Whyatt, illustrated by Katherine Quinn, a nine-year-old bookish lover of twigs, feathers and secrets shares her unique view of the world. In Catch a Falling Star (Walker) by Meg McKinlay, Frankie Avery waits for Skylab to fall to earth, a momentous event that brings back difficult memories about her father. A moving read that tenderly folds in messages of loss and hope.

Stacey and Laney may be "mirror" twins, but emotionally they are completely different. Laney is a popular tearaway who hates school, while Stacey’s goal is to leave town and live a life of "sea and swimming".

Their close-knit family, made up of mum, uncles and aunties, is shattered when Laney sneaks off to be with her boyfriend and disappears on land owned by racist hicks. Turns out Stacey’s connection with her twin is not just genetic; terrifying dreams signal that Laney is alive, but that she’s far from safe. Ghost Bird (UQP) by Lisa Fuller is an intense and unflinching read about the bond of family, with characters you can’t help but emotionally invest in. 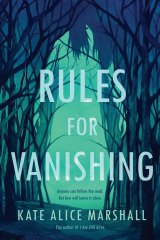 Xiomara (X) Batista is a young woman battling life on multiple fronts. Her body is "unhide-able" and attracting unwanted attention, her Catholic parents are smothering her with their faith, she’s falling for a guy at school, and her twin brother is reckoning with his sexuality.

All these complex issues are being tamed, in a way, by her growing interest in slam poetry and the support of a teacher who sees X’s talent for putting her truth on the page. Winner of the National Book Award for Young People’s Literature 2018, Poet X: A Novel (Egmont) by Elizabeth Acevedo is a book about the power of words and their capacity to transform.

One Sunday night, every student at Briar Glen High School receives the same text message: "Do you want to know where Lucy went? She went to play the game. You can play, too. Find a partner. Find a key. Find the road. You have two days." The disappearance of Lucy Gallows is a town myth, but for Sara, it feels more like a taunt than a challenge. A year ago, her older sister Becca took off with her boyfriend and hasn’t been heard of since. Now Sara and her friends discover that there might be a connection between legend and reality. If Stranger Things gave you chills, then Rules for Vanishing (Walker) by Kate Alice Marshall is the book for you.

(Walker) edited by Michael Earp is a validating, necessary and refreshing read, packed with ferociously good writing. Erin Gough’s In Case of Emergencies, Break Glass features a delightful "meet-cute" moment, while Omar Sakr’s edgy An Arab Werewolf in Liverpool will remind you that marginalised voices are no longer asking for permission to be heard. There is not a single flat spot in this must-have collection – every contribution entertains, provokes, charms or stings. It is not important which letter of the alphabet you identify with, because these are stories for everyone.

More standout titles: It Sounded Better In My Head (Text) by Nina Kenwood is a refreshingly realistic take on the hilarious and precarious nature of first love, with superbly candid references to the agonies of acne. Garth Nix is an author you can trust, so find a quiet spot and fall into Angel Mage (Allen & Unwin) and discover a new (but familiar) world inspired by Alexandre Dumas’ classic, The Three Musketeers.

Mental illness, first love, and family duty make The Surprising Power of a Good Dumpling (Allen & Unwin) by Wai Chim a hugely entertaining read, but be warned: the book will have you yearning for some xiao long bao. Vikki Wakefield’s gripping and ultimately uplifting This Is How We Change the Ending (Text) is an unflinching and almost unbearably tense story about Nate McKee, an emotionally unanchored teen, struggling to survive amidst family violence.