Ms Plibersek, a former deputy leader and prominent figure of Labor leader Anthony Albanese's left faction, says the Morrison government should set an official target of full employment and use every tool at its disposal to meet that goal. 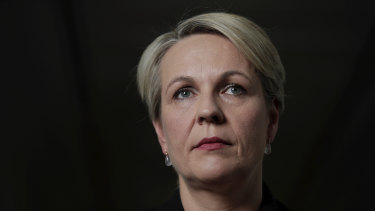 Launching her new book, Upturn: A Better Normal After COVID-19, the opposition education spokeswoman said Australia had a rare opportunity to reshape both society and the economy on the other side of the pandemic.

"John Howard used to talk about wanting Australia to be 'relaxed and comfortable'," Ms Plibersek told The Sydney Institute on Monday afternoon. "There's something in that. Most of us yearn for a time when we aren't looking suspiciously at door handles; when we aren't worried about how we'll pay the rent or the mortgage. We all deserve a bit of relaxation after this year. But we should aim a bit higher than relaxed and comfortable."

Ms Plibersek said economic recovery required a thriving private sector, which in turn required a customer base that could afford its products.

"Low wages mean less aggregate demand in the economy; which means less buying and selling, which means less recruiting and hiring," she said. "It means people don't have that extra five bucks in their pocket to buy a coffee in the morning."

The Reserve Bank expects unemployment to peak just under 8 per cent by the end of the year but by the end of 2022 the jobless rate is forecast to still be at 6 per cent while under-employment is also expected to be elevated.

Employment growth is expected to remain soft as people who left the jobs market during the pandemic start to look for work and support such as the government's JobKeeper wage subsidy are wound back.

About 30 per cent of businesses have frozen the wages of their staff, with another 25 per cent expected to do so. Wages are expected to grow by only 1 per cent through 2020-21 and 1.5 per cent next financial year.

"Falling wages are a recipe for a slower, more painful recovery, and a much less equal country on the other side," Ms Plibersek said. "We're already seeing this in the economy. As the Treasurer admitted, the unemployment rate has again 'ticked up', immediately following cuts to JobKeeper, JobSeeker and other financial supports. We shouldn't accept years of lingering unemployment and underemployment."

She said the pandemic had exposed a lack of commitment from governments to train the workforce and fund aged care, childcare, disability services, and other caring professions.

"These are honourable professions; we should start treating them like it," she said.

Ms Plibersek argued that insecure work would be the greatest issue of the pandemic recovery and while it was a "choice this government has made" the nation should choose to reverse it.