‘The emotions took over’: Politicians from both sides offer sober views on leaders’ debate performance

No matter the political persuasion, the apparent consensus about Prime Minister Scott Morrison and Labor leader Anthony Albanese’s second debate of the election campaign was that it could’ve been calmer. 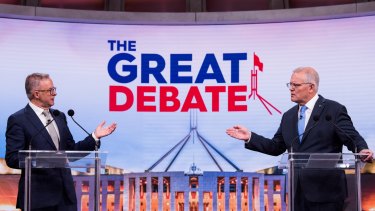 Morrison and Albanese clashed bitterly during Sunday night’s debate, yelling and accusing each other of misleading voters.

Nationals deputy leader David Littleproud perhaps delivered the kindest appraisal of their performance during the televised event, broadcast on Nine.

“You are trying to get your point out but with a lot at stake the emotions took over and really some of the message got lost and I [think] the policy, in particular, could have been a lot stronger,” Littleproud told Nine’s Today show.

“We believe we have a superior policy position and record but unfortunately it descended at times to an attitude where, you know, I think people would have been a bit disappointed. But that is the nature of these combative debates.”

Clare described the debate as “pretty full on, pretty shouty” in an interview with ABC radio’s Patricia Karvelas on Monday morning.

However, the Labor frontbencher said Albanese needed to fire back at times against Morrison.

“You’ve got to push back against try-hard bullies like Scott Morrison. You have to know you’ve got to respond with the facts. And that’s what Anthony did last night,” Clare said.

Birmingham had a similar view about the way the debate played out, however, came to a different conclusion about who came out on top.

“I think it was a pretty scrappy format but, in the end, I think Scott Morrison again showed a greater grasp of detail than Anthony Albanese,” he said.

“Australians should want a prime minister who knows what he’s doing, not one who stumbles and fumbles around even the most basic policy or economic questions.”

But Albanese’s recollection of the night was somewhat different: “Scott Morrison didn’t have anything to say except shouting. He only had smears and that smirk throughout it all.”

Viewers were unable to split the two leaders, with respondents delivering a 50:50 final verdict.