Home » The only thing worse than Point Break? Keanu Reeves’ acting in it

Point Break turns 30 this year. As with many surfers passing their peak, it’s still acting the teenager, more ludicrous with each year.

True, the Kathryn Bigelow-directed original cannot age as poorly as its 2015 remake, which was born stale. Being bad was never a problem for Bigelow’s Point Break: it became a cult movie and a defining artefact of the early 1990s by being so bad that millions of people thought it was good. It generated cultural references, parodies and even a stage show, all through being somehow iconically good-bad. Having watched it this week, I suspect it’s passed through good again and reached a badness from which it can never climb out. 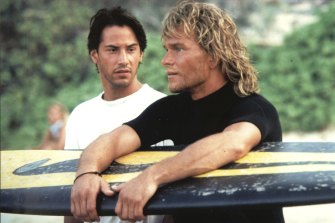 Keanu Reeves (left) and Patrick Swayze in a famous scene from their ironically iconic film. Credit:

But really the fascination of Point Break is in what a thumpingly terrible actor Keanu Reeves was. Sometimes the whole movie feels like a prank at his expense, like he’s been told to read his lines as if he’s Al Pacino in Scarface while everyone on set is laughing at him. But are they? The horrifying thing is that, in the America of that time, they probably weren’t. 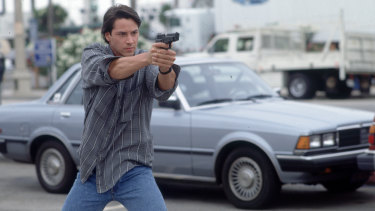 Reeves’ clueless affect had worked as a boy hustler in My Own Private Idaho, which was released the same year as Point Break. Tragically, while his Idaho co-star River Phoenix died, Reeves was left alive to pursue the Point Break fork in the road and turn himself into a hero of films in which stunts and action could not quite obscure his absence of acting ability.

Perhaps the generational poignancy of Point Break lies in this crossroads; Reeves sold out. But did he have any talent to sell out in the first place? And did he know he was selling out? Or worse, did he think he was selling out? He’s so earnest in his hopelessness in this movie, you almost want to hug him and whisper in his ear that he can be a beautiful schoolteacher and friend and father, instead of allowing his extraordinary good looks to drag him into a profession he’s no good at and towards ambitions he can never fulfil.

It’s all there, in his inability to make even the silliest lines of W. Peter Iliff’s script sound like they’re spoken by a sentient being. But you can’t dislike him. You pity him. Point Break is a key cultural reference point for the Zoolander films, created years later by Gen Xers trying to make sense, or comedy, of the youth they had wasted. Americans embarrassed that they couldn’t laugh at their stupidity in films like Point Break and Top Gun found a broad, unambiguous way of doing it through Ben Stiller and Owen Wilson. Once they realised Keanu Reeves was Derek Zoolander, the penny dropped. 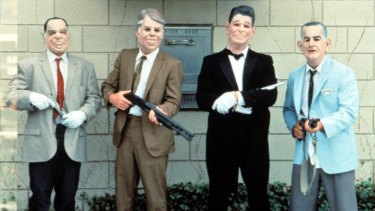 There are good things in Point Break. The presidents’ masks on the robbers’ faces is an inspired choice. There’s a terrific chase scene through the back streets and houses of Santa Monica, even if it does demonstrate that Reeves runs like a profoundly uncoordinated kid who couldn’t do the hundred in less than 20 seconds. There are two skydiving scenes, the first of which has no function in the story but shows exhilarating footage over the American Southwest. The second skydiving scene is an excuse to bring the film’s homoerotic undertones to the surface, Reeves and Swayze in full-frontal frottage clinch while daring each other to pull the ripcord. Here you hope the film is laughing at itself, but it’s not.

The surfing footage, of pro surfers backlit to conceal their faces, was praised by critics, which only underlines how little they know. Reeves makes a good enough fist of trying to stand up on his board for you to know that he needs four years’ daily work to become moderately proficient, instead of the few days it takes him to achieve cred with the gang. There is the usual Gidget-esque intercutting of flat water with massive waves. Watching this movie with my 19-year-old son, I asked what he thought, and he overturned the entire critical consensus by replying, “It wouldn’t be quite so bad if it didn’t have the surf scenes.”

I have to confess that I feel like the last person born in the mid-1960s who never saw Point Break. I watched virtually no movies or TV or listened to any music between about 1989 and 1993, so I missed what I’m told were the cultural moments that defined my generation.

Watching Point Break now, I regret nothing. Like most of the culture we were rejecting, Point Break is insolubly American. It baffles me that anyone thought it had anything to recommend it, until I realise that those millions who loved it were mostly American. By 1991, our status as a cultural colony of America had become so unbearable that the thinking person was pressed into rejecting it. When I see Point Break now, it feels like a very foreign film, from a different planet almost, and to be bewildered by it is satisfying, showing that the separation was effective.

Never does Point Break look more American than when it arrives, for its final scene, in Australia. Years after the gang imploded and everyone else died or got caught, Johnny tracks down Bodhi at that 50-year swell at Bells Beach. Only it’s not Bells Beach, which is just as well because there’s no reason anyone would go there for such an event. The Bells Beach of Point Break is fringed by Californian pine trees. The only Australian thing about the scene is a one-line cameo from Peter Phelps. Bodhi goes into the surf, wipes out, and apparently dies. Johnny throws his law enforcement badge away. By now, this is not even a spoiler; there’s nothing left that this film hasn’t already spoilt. But at least they never really made it to Australia.

Find out the next TV shows, streaming series and movies to add to your must-sees. Sign up to get it every Thursday.