Home » Lifestyle » The precarious balance of a woman’s life, and the speed it can unravel

The precarious balance of a woman’s life, and the speed it can unravel

Laure Calamy may not be the first woman to fall for a donkey – Titania hath paved that way – but she is probably the first who became a star because of it. Her role in Antoinette in the Cevennes, in which she led a cantankerous donkey through the French wilds, earned her the Cesar award for best actress in 2020. 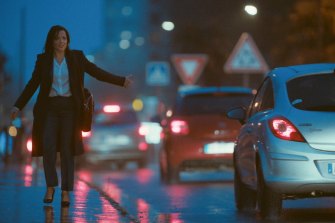 She’s just as good here, in a more dramatic tone, as Julie, a young woman with two children who struggles each day to balance work and family. Julie lives outside Paris, because rent is cheaper. She has separated from the donkey she married; he is late with his alimony, as usual. She rises in the dark, feeds the children and drops them off with a stern but reliable old neighbour, Madame Lusigny (Genevieve Mnich). Julie commutes across Paris to a five-star hotel where she is the senior maid: her degree in economics doesn’t get the beds made.

From the off, writer/director Eric Gravel follows an old technique of Hitchcockian story-telling: create a sturdy character then throw everything at them, to see how they react. In this case, he begins with a train strike. This is not hard for a French audience to understand: French trains strike every year, mostly in May and June rather than July (because railway workers like their annual leave too).

Gravel doesn’t condemn the strikers, despite the chaos. He simply shows how the actions of one group of workers affect another, less powerful group. Julie has an interview for a new job, one that would use her skills. The strike could not come at a worse time, but that isn’t the point. This is a film about the precarious balance of a woman’s life and the speed with which that equilibrium can unravel.

France prides itself on protecting the work-life balance. It has laws to guard its cultural borders. Supermarkets cannot open on Sundays, except under special circumstances. That is partly because the family and Sunday are sacrosanct. In that sense, the pressure on Julie affronts French values. This is not supposed to happen in a civilised country.

Laure Calamy has an extraordinary ability to project warmth, as well as strength. Her character here is down but never out, no matter how hard life pushes her. We can read her emotions without the mannerisms that other actors sometimes use. Her emotions are clear, her face an open book. That gives her performance a superb intimacy and credibility.

Eric Gravel just keeps the camera close up on that beacon of emotion, capturing every thought as it crosses her face. In one sense, this is a film without plot: in another, it gives us a whole world.