The secret that keeps Kiefer Sutherland in almost perpetual motion

For more than 35 years, Kiefer Sutherland has haunted and captivated audiences in the guise of iconic villains, including a vampire gang leader (Lost Boys), a schoolyard bully (Stand By Me), and a terrifying rapist-murderer (Eye For An Eye). For most though, he is Jack Bauer, the counter-terrorism agent he has embodied for nine seasons of the US drama 24. He still has to explain to strangers who stop him in the street that he is not Bauer.

Over the phone from his Los Angeles home, he reveals the secret to his decades of action-packed, back-to-back films, TV and stage performances. 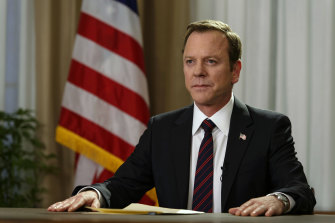 “Fear and self-loathing,” he deadpans, then laughs. “Normally, just anxiety would take care of it for me, and certainly with a show like 24, I was running and working out so much … I’ve never stopped working. The worst thing for me was the pandemic where we couldn’t go anywhere, and you start figuring out how to use your furniture for exercise.”

After the ninth season of 24 wrapped, he played the US president in three seasons of US/Canadian political thriller Designated Survivor, Detective Clay Bryce in a modern take on the crime drama The Fugitive, and he’s just finished filming on both Violence of Action with Chris Pine and upcoming series The First Lady, playing Franklin D. Roosevelt opposite Gillian Anderson as Eleanor.

“For the first 20 years of my career, I only did films. You never knew when the next one was coming, so you spent a lot of time out of work, and when you got a job you relished it, then you were out of a job. You never took it for granted and you could never look too far ahead. 24 changed that … that was the closest I’ve had to a normal job.” 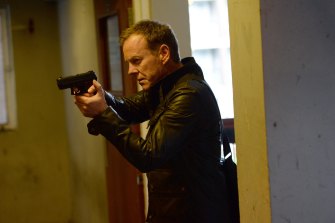 Sutherland often has to explain to strangers he isn’t actually Jack Bauer from 24.Credit:Daniel Smith/FOX

His aversion to normal jobs, partnered with a love of Americana and country rock music, lead him to found record label Ironworks in 2003 with Jude Cole. Though he handed the reins over to Cole in 2011, his first album Down in a Hole was released on Ironworks in 2016, followed by Reckless & Me on BMG in 2019. He had just come off a European tour in early 2020 when the pandemic crisis was taking hold in California.

“I’ve spent most of my last 10 years on the road whether it was shooting the last season of 24 in England, the first three seasons of Designated Survivor in Toronto, and in between, touring music. Because of the pandemic, I came home, and it’s the longest I’ve ever spent in my house in my life.”

Sutherland had written a couple of songs on the road, so faced with a lot of time off work, he rallied his band. The result, ultimately, is Bloor Street, an homage to the Toronto neighbourhood in which he was raised and returned to for Designated Survivor.

The title track epitomises the mood of the album: bluesy folk-rock, in the vein of Jakob Dylan’s Wallflowers, Merle Haggard, Ray Davies or Wilco. Performing to live audiences has been an invigorating change from life in front of the camera reading other people’s lines.

“It’s the kind of kinetic energy that you get from something that you don’t get from anything else. I’ve been an actor for 35 years, I’m used to being in front of a camera and people … all of a sudden, I’m standing in front of 400 people I’ve never met before and I’m about to tell [them] something incredibly intimate about why this break-up happened in my life and how it laid me to waste for a while … The audience is going to have a preconceived notion of me when they walk through that door, but if we can get past that by the end of the night, that’s an incredibly powerful thing.”

Bloor Street is out January 21 on Cooking Vinyl.