Viewers of This Morning declared a cold water swimmer ‘absolutely bonkers’ today as she revealed she smashes through ice to dive into frozen pools and lakes.

Fay Preene, from the Lake District, spoke with Holly Willoughby and Phillip Schofield from the banks of Lake Windermere and stunned the presenters as she slowly walked into the freezing cold water during the interview.

The cold water swimmer, who was wearing just a swimsuit as she dove into the lake, said she often travels to snow covered areas to access cooler water, adding: ‘A lot of swimmers love it when the ice comes, and will travel higher up to the mountains, frozen over and will smash through the ice to swim there.’

Many of those watching were left baffled by the unusual hobby, with one person commenting: ‘This woman is insane,’ while another wrote: ‘I wouldn’t even swim in Windermere in the summer!’ 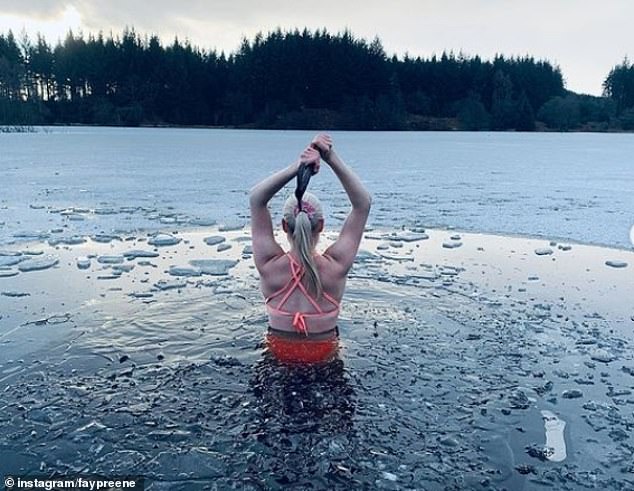 Viewers of This Morning declared cold water swimmer Fay Preene, from Lake District, ‘absolutely bonkers’ today as she revealed she smashes through ice to dive into frozen pools and lakes 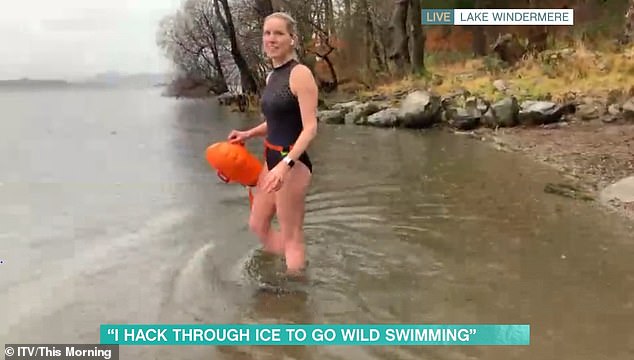 Holly and Phil were left speechless when Fay walked into the water, saying: ‘It is cold!  The question I get a lot, it is cold but you do get used to it.

‘The feeling you get afterwards is so worth getting in now.’

Phil asked: ‘I don’t even know if she answered your question then, I suddenly thought, “Are we boring you?”

‘First guest we’ve ever had who has swum off! It never gets warm in there?’ 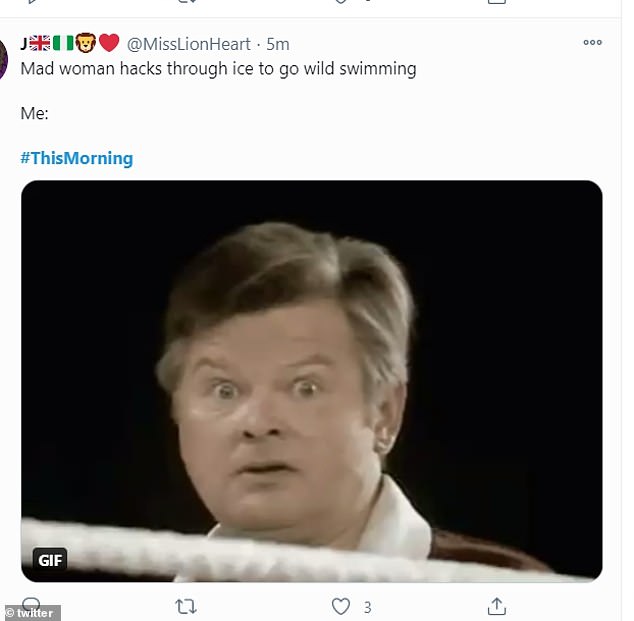 Many of those watching were left baffled by the unusual habit, with some suggesting they ‘wouldn’t even swim in Windermere in the summer’

She said: ‘Even in the summer, we’d say it does get warm but some people would still argue it is cold in the summer. In the winter, it’s around 5 or 6 degrees.’

Meanwhile Holly said she thought the swimmer would be wearing a wetsuit, with Fay explaining: ‘Another common question. A lot of people do wear swimsuits, myself and a lot of friends do prefer to skin swim.

‘The feel of the water and the cold on your skin…by all means, wear a wetsuit. It’s a great starting point.’

Phil asked: ‘You are not superhuman, you are a human, you will get hypothermia.  There is a time limit to how much time you can spend in there. 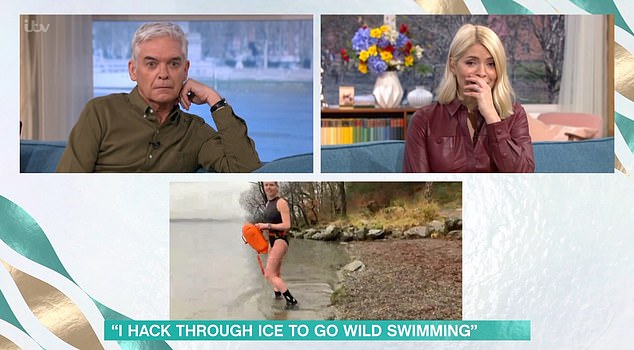 ‘Absolutely, it is a dangerous sport and should be taken very seriously. Now, we’re probably in for around six minutes. But that wouldn’t be the sort of time I’d advise for a beginner.

‘As well as thinking about other things off shore, bringing all the things you need to recover safely after.’

Standing in water up to her waist, she listed the benefits, saying: ‘For me, there’s a huge mental health benefit, a huge release of endorphins after you’ve swam.

‘Because you’re putting into a natural mode o f stress, your body gets used to that pattern.’

The benefits of cold water swimming

Taking a dip in cold water could help defend the brain against dementia and other degenerative diseases, research has suggested.

The compound is also produced by hibernating mammals, triggering the destruction and regrowth of synapses — which are permanently lost in dementia. Their loss sparks a decline in cognitive function, leading to tell-tale signs of the cruel disease such as difficulty concentrating and confusion.

Scientists say their renewal is good because it repairs vital connections in the brain, staving off the debilitating condition for longer.

When hibernating animals — including hedgehogs, bears and squirrels — bed down for the winter the protein sparks the removal of 20 to 30 per cent of their synapses. But by the spring, it activates the miraculous regrowth of these links as the animals stir.

Studies in mice with dementia have even shown the protein could help delay the onset of degenerative brain diseases.

Scientists from Cambridge University, who have extensively covered the link between dementia and the ‘cold-shock’ protein, say their research suggests a drug that can trigger the production of this protein could ward off the onset of dementia by years.

Other benefits of cold water swimming include:

• Reduction of stress and enhanced mood

She said she feels she can deal with day to day stress better, adding: ‘For me, it’s the mental health side of it. And a huge part of that is who you’re at the lake with as well.’

Meanwhile Faye explained she also goes ‘higher up’ to find the ice, saying: ‘A lot of swimmers love it when the ice comes and will travel higher up to the mountains frozen over and will smash through the ice to swim there.’

Fay advised beginners ‘buddy up’ with a cold water swimmer, adding: ‘Don’t go alone- go with someone who is experienced in outdoor swimming.’

She said she had a newfound love of the environment and called the Lake District ‘beautiful.’ 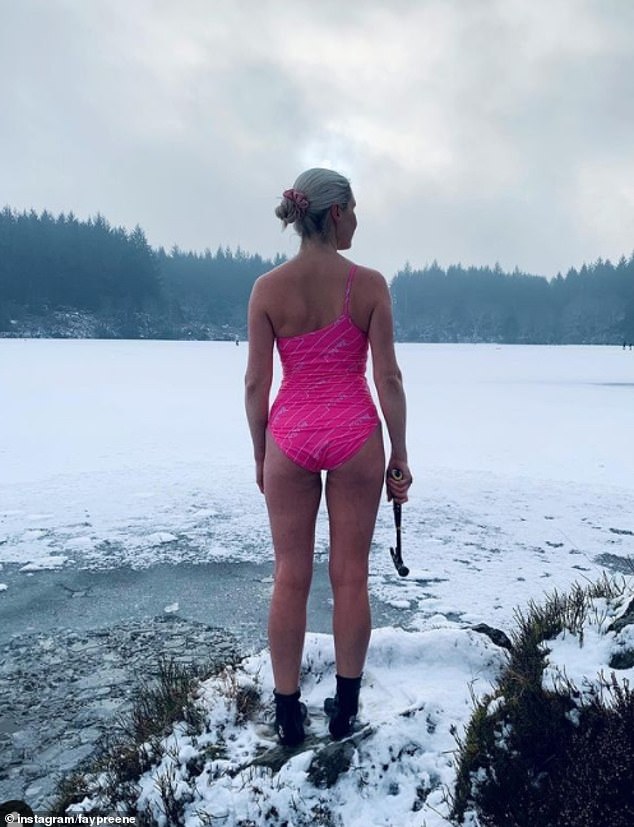 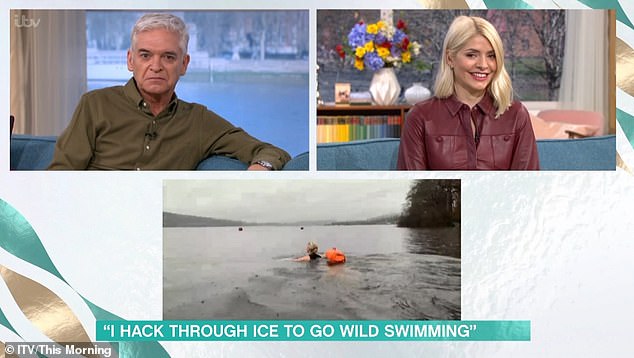 As the interview came to a close, Fay dove into the water and swam off into the distance.

But while Fay hailed the  benefits of the hobby, many of those watching said they wouldn’t be trying the hobby.

One said: ‘Absolutely bonkers’, while another wrote: ‘She’s mad on #This Morning.’

One added: ‘You’d have to be a masochist to do such a thing!’