'Trashy' mother is blasted after giving her baby a manicure

A photo of a newborn baby with long, pointed nails has gone viral as people warn the inch-long ‘claws’ could be incredibly dangerous.

A social media user, whose location is unknown, came under fire after sharing a snap on Facebook showing a woman’s thumb gripping a baby’s tiny hand. The infant appears to have had a manicure, with lengthy fake nails attached.

Posting the image, which has since gone viral on Twitter, the woman boasted: ‘I can do your babies nails…cheap rates.’

Some social media users were quick to point out the dangers of the child’s sharp nails, with one commenting: ‘Baby nails are sharp enough as is, I can’t imagine equipping my daughter with claws. Hard pass.’ 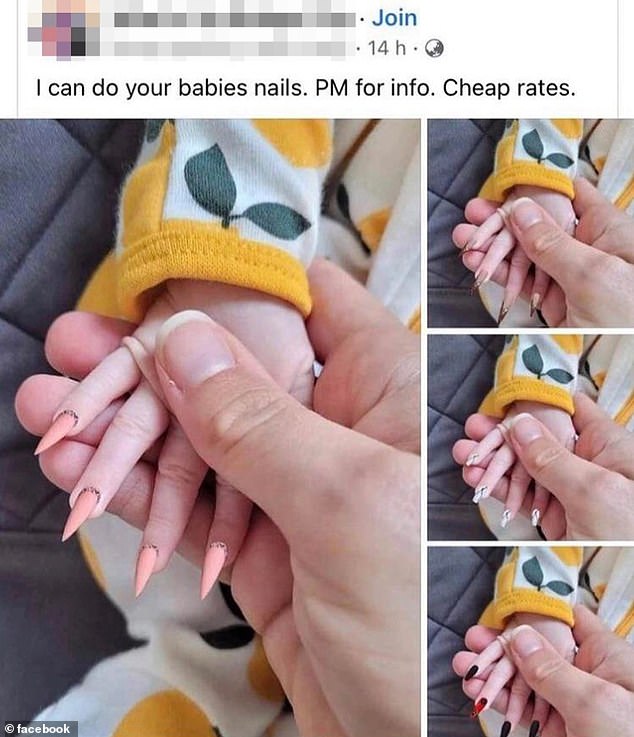 A photo of a newborn baby with long, pointed nails has gone viral as people warn the inch-long ‘claws’ could be incredibly dangerous

The photos show a woman holding a newborn’s hand, who appears to have been given several different manicures, with lengthy fake nails attached to their tiny hands.

The images show the little girl wearing false nails on each of her tiny fingers in three different styles.

In one image, they can be seen with pointed sharp talon-like nails, while in another, the child appears to have been given a more rounded edge.

The mother showed off her skills at perfecting the stiletto shape, a square and an oval edge.

Caring for a newborn’s nails

Newborn babies tend to have soft, flexible and fast-growing nails.

They can easily become long and ragged. Parents may be concerned babies will claw their face during the early weeks when they can’t control movement.

Some parents also put mittens or socks on baby’s hands, temporarily. Some experts advise against using mittens for long periods as babies need to be able to explore and feel with their fingers.

Nails will soon harden and develop a firmer, free edge

The strange advert has since been shared on Reddit where it has prompted outrage from fellow parents pointing out how dangerous the trend could be.

One commented: ‘You’re supposed to keep your baby’s nails cut short so they don’t hurt themselves… this is trashy and f***in stupid.’

Another wrote: ‘This is highly dangerous. Babies often times will poke themselves in the eyes or face and even without nails they’ll leave scratch marks. This is straight up stupid and will only harm the baby further.

A third added: ‘I could understand painting a babies nails, but giving them fake ones? It’s too dangerous! They constantly are touching their faces, so it could really do damage to their eyes. It’s better to wait until they are a lot older.’

‘Oh gosh this seems so dangerous for both the baby and anyone around them,’ another added, ‘I already get scratched a lot by my baby brother’s super short nails.’

However some social media users suggested the nails had ‘all been photoshopped on’.

It’s not the first time this strange trend has gone viral, with an image showing a child with sharpened nails hitting the headlines in December.

At the time, some social media users were quick to point out the dangers of the child’s sharp nails.

‘Baby nails are sharp enough as it is, those things would tear your face right up,’ one person said.

‘An itchy eye could result in permanent blindness,’ added another. 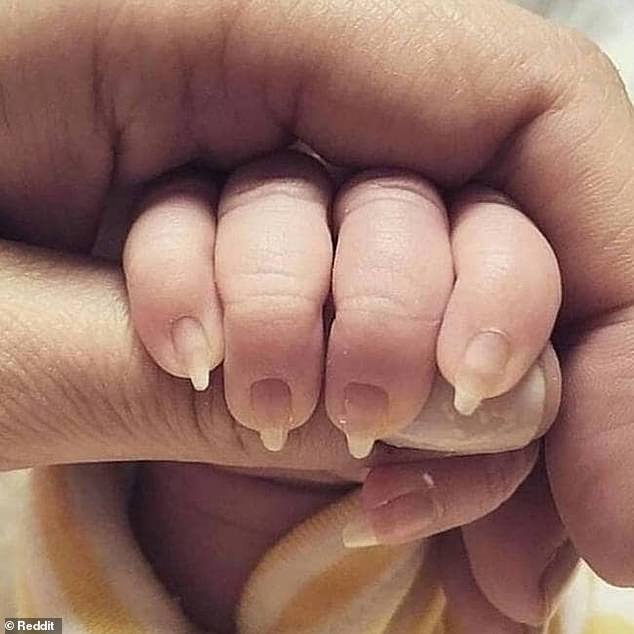 At the end of last year, an image showing a baby’s tiny hand with sharp, pointed nails gripping onto a woman’s thumb went viral

A third person said: I hope they did this just for the picture but then again they let the baby’s nails grow this much.

‘Either way it’s not good. I feel for the kid.’

Some insisted it could have been an honest mistake, claiming their own children had particularly quick-growing nails that needed regular attention.

Baby website Living and Loving said: ‘If your baby was born after her due date, her nails might be quite long and sharp.

‘Keeping them short helps prevent scratching of the face, which is common in small babies.