Home » Lifestyle » Uncomfortable truths about our Royal Family – and racist past

Uncomfortable truths about our Royal Family – and racist past

Two appeals were made this week to deal with uncomfortable truths. Meghan, ex-Duchess of Something-or-Other, asked us to believe that at least one person – someone important – in our Australian Royal Household is a racist. 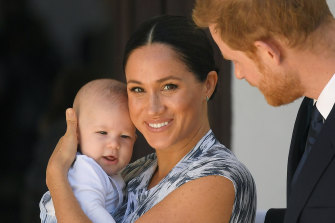 The Duke and Duchess of Sussex with their son Archie Mountbatten-Windsor.Credit:Getty

Meanwhile Dan Andrews has unveiled a unique process to consider that colonial Victoria has a racist past – that early settlers held secrets to be divulged if only we go the right way about asking the right questions.

Both are compelling challenges. Both require an unflinching gaze. Both tell us something about ourselves, although many people will put their fingers in their ears and say “I would rather not know”. Here is why they should listen – here is why we MUST listen.

‘Our’ Royals are literally the most entitled people on the planet – it is not possible to be more entitled than having a title. Their insistence on the antiquated protocols and pointless archaic etiquette to match is all evidence of unfathomable privilege. Apparently, they have special blood and by reason of ancient birthright are not like their ‘subjects’. 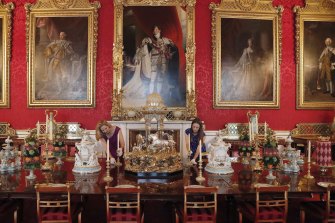 Pomp and ceremony: Buckingham Palace staff arrange a dining table as part of a 2019 exhibition.Credit:AP

Whether you like it or not, these feudal concepts linger in our contemporary democracy, and are the foundation fantasy of our Constitution. Despite them being the opposite of that most Australian ethos of a ‘fair go’ for all. Enough is enough. Our continuing dependence on this nonsense is embarrassing.

Meanwhile, the same day, in a case of serendipitous timing, the state government’s ‘Yoo-rrook Justice Commission’ is announced. It is astonishing in its substance and style.

A path to gradually – no doubt very gradually – move to truth telling, reconciliation with Indigenous Victorians and to heal is on offer. Underpinning the idea is the use of what is called restorative justice – like the specialist and successful Koori Court, modelled itself on Maori Courts in NZ.

No government in Australia has dared to allow these questions to be asked – until now we have been too afraid to open those wounds.

But it is not just a commitment to a ‘Royal’ Commission [there it is again … could it not be a Commission of Inquiry? Why do we need the Queen’s imprimatur, but I digress…] It is also the unique methodology that Andrews has committed to for the selection and appointment of the commissioners who will do this sensitive job.

Under our Constitution, only the Premier can recommend to the Governor who will be a royal commissioner. Dan Andrews has delegated the selection of the five Yoo-rrook Royal Commissioners to an independent assessment panel. This vetting group will run a public process, seek nominations and check the credentials of those who put their names forward. A short list will be published and the public can comment – favourably or otherwise – about those short listed.

The vetting group of four – two are First Nations leaders, a third a highly qualified Indigenous lawyer who runs the Premier’s Aboriginal affairs policy unit, the fourth a Spanish international lawyer who has worked on truth and healing all over the world – will interview the short-listed candidates and then recommend to the Premier who to appoint as the Royal Commissioners. The chair of the commission and a majority of the five must be Indigenous. 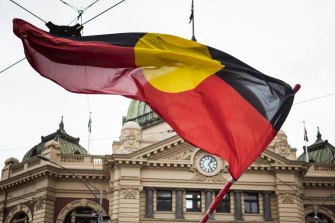 The Indigenous flag on show in the streets of Melbourne.Credit:Chris Hopkins

This breaks the fundamental political rule to only start inquiries that find what you ask them to find and recommend what you seek to have recommended. The Premier’s strategy, backed by focus groups and polling, is to press on with reform, to follow the voluntary assisted dying laws, supervised injecting centres, medicinal cannabis, abortion law changes, banning gay conversion ‘therapy’ and a raft of similarly progressive policies. Reconciliation will take time, but that time starts now.

Dan Andrews’ short-term absence resulting from his fractured vertebra has accentuated the dominant role he plays in this administration. As always in politics, senior colleagues keep an eye out for any opportunity for advancement should the Premier retire, move to the private sector or pursue a career change to professional golf. But possible successors are not too animated just now.

His enforced rest will afford him and his family a chance to sample life without the daily stress and hurly-burly of political life and whether he emerges re-invigorated or tempted to leave is anyone’s guess. What is abundantly clear though is that his stamp on this state will continue with the work of Yoo-rrook Commission and other landmark reforms enduring.

In contrast, the House of Windsor, self-obsessed and more concerned about their showbiz credentials than the well-being of their ‘subjects’, are on borrowed time. Anyone interested in some truth telling in London? If we are going to tell the truth about what happened a few hundred years ago, we must also tell the truth about our no longer fit-for-purpose constitutional monarchy.