Victoria’s health teams are better placed for success this time around, say epidemiologists

Epidemiologists are optimistic that Victoria’s public health teams are better placed to tackle the new coronavirus outbreak than during the state’s devastating second wave that began in June. 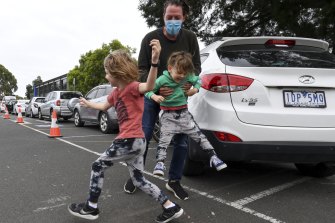 Michael Glen from Cheltenham with his boys Nate, 6, and Rocky, 4, play chasey while waiting for a COVID test in Parkdale.Credit:Penny Stephens

“The Victorian public is also more prepared. Anecdotally, I can see that peoples’ mask usage has already changed,” said Professor McCaw, also a member of the Australian Health Principal Protection Committee that advises the national cabinet. “Victorians know how to respond to this, and I think we will.”

More than 70 people were in isolation after eight new coronavirus cases were recorded on Wednesday and Thursday. All eight were linked to a likely transmission event at the Smile Buffalo Thai restaurant in Black Rock on December 21, where a person dined after returning from NSW.

Deakin University's chair in epidemiology Catherine Bennett said it was excellent news that all of those eight cases could be traced back to one source.

“The other good sign is how quickly our public health response team established the link to the restaurant,” she said.

The risk now was that there had been some other people who had been exposed to the virus at that oubreak point or since, “and we haven’t figured out all of the exposure sites”.

Professor Bennett said the tracing that was being done now was “completely different” to six months ago.

“To have the level of information that they have gathered within such a short time is extraordinary,” she said. “They are already going out to the contacts of contacts, which is exactly what we want to see.”

She said the health department’s Public Health Unit had been “ready and waiting for this”.

Professor Bennett also said it was important that both the Thai restaurant and a church where contacts of the initial infected person had attended had kept good records of who had visited. “It means the health department can actively chase these contacts,” she said. 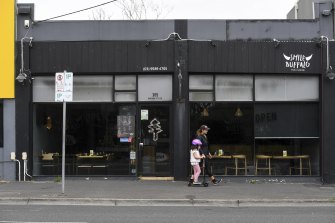 Professor Bennett also endorsed the Victorian government's swift action to close the border to NSW. “The public health response is looking exactly how you would want to have it look at this stage, and the extra restrictions are about us helping this effort by keeping [the outbreak] as small as possible while they get on top of it.”

Professor McCaw said it was good all of the cases appeared to be linked to the Thai restaurant because it was “a single event that’s much easier to get on top of than if there were separate chains of transmission”.

But he warned the next three to four days would be critical.

“We will find out if there are more cases from that restaurant and that puts us on high alert for a minimum of two weeks,” he said. “People need to be incredibly vigilant.”

The team Professor McCaw leads at Melbourne University has been analysing the NSW spread of cases. The state has had 136 new cases in the past week. He said that while people in Sydney were still mixing enough for coronavirus to have spread, the "excellent public health response that is in place" was tamping it down and giving the opportunity to stop it spiralling out of control.

This was very different to in Victoria in June and July, when the virus spread widely in the community. It only started slowing when a strong lockdown was instituted.

The NSW outbreak was "very different to how Victoria was," Professor McCaw said.