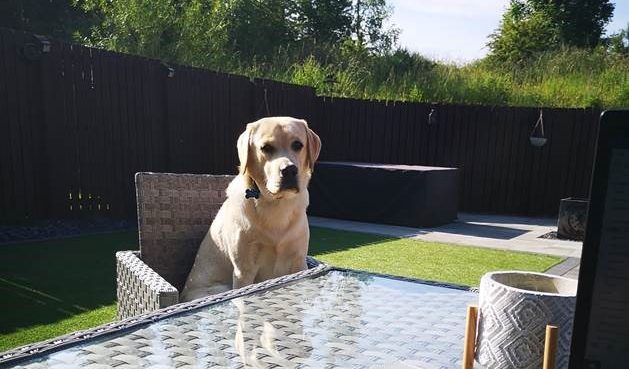 A puppy had to be rushed for emergency vet treatment after a hot tub horror incident where he ate foam.

Labrador Cooper, who has just turned one, licked the foam off the top of the water after his owners turned their backs for a minute.

Within seconds he sounded like was gasping for air, and owner Joanne McGovern made a tearful dash to an emergency vet, fearing she was going to lose her pet.

Sales of hot tubs have boomed during lockdown as homeowners look to make the most of their gardens, with suppliers reporting sales increases of up to 1000%.

And many staycation properties are highlighting the fact they have hot tubs as an extra attraction.

‘We’ve always been really cautious with the hot tub, but Cooper has never shown any interest at all in going near it,’ said Joanne.

‘It was a lovely Sunday and my partner had topped up the chemicals, put the jets on and popped into the house for a moment.

‘I was in the living room and almost immediately Cooper came in like he was gasping for breath.

‘I ran into the garden and when I saw water on the steps by the tub, I realised he’d got up and licked the foam with all the chemicals.’

Joanne phoned Vets Now in Glasgow, where she was told to get there with Cooper as fast as she could.

‘It was longest journey of my life,’ she said.

‘I was crying all the way and kept talking to him to make sure he was still with us.’

Cooper was rushed straight in, and Joanne was able to tell the staff exactly what cleaning products were used in the tub and read out the chemicals they contained.

‘When we did the examination, Cooper was making noise similar to reverse sneezing,’ said vet Nicole Laws.

‘But, thankfully, there was no breathing difficulty or ulceration of the mouth, nose or eyes; we were able to establish which chemicals, including chlorine, he had ingested and were causing the respiratory irritation.

‘We gave him some medication to treat this.’

Nicole added: ‘Cooper’s case highlights the dangers of hot tubs for pet owners and I’m so pleased to hear he’s back to normal. He was an incredibly affectionate dog.

‘We have seen numerous cases involving pets almost drowning in hot tubs or suffering an extreme reaction after inhaling treated hot tub water into their lungs.

‘We’d advise owners with hot tubs, or who are visiting somewhere with them, to always keep their dog away from them and to cover them up when not in use.’

The team treated Cooper and then monitored his condition over the next few hours before allowing a hugely relieved Joanne to take him home with medication for his airways and eyes.

Thankfully, he has since made a full recovery, but Joanne knows things could have been different.

‘Even though I knew we’d got him to the right place, it was really frightening,’ said mum-of-two Joanne.

‘It happened so quickly. I would never have left my wee girls unattended by the hot tub and you’ve really got to be every bit as cautious with dogs as you would be with children.’